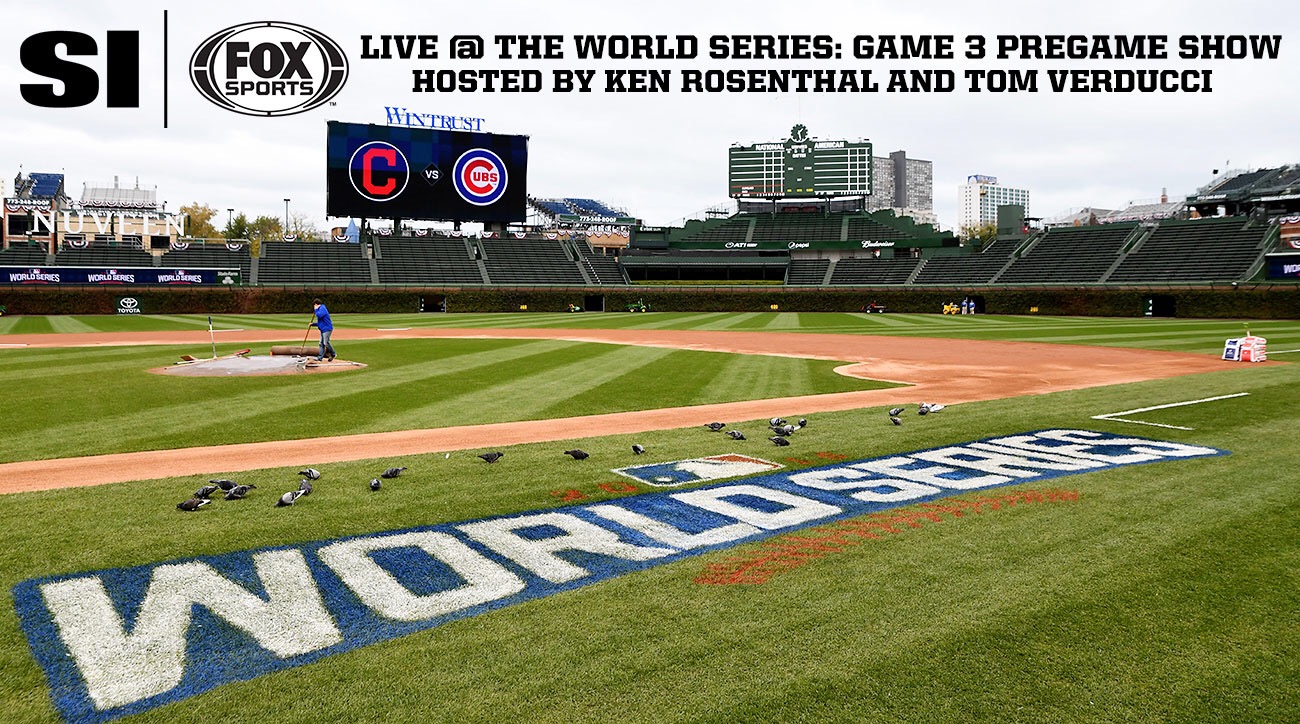 The advertising and editorial partnership Sports Illustrated and Fox Sports Digital announced back in August and further explained earlier this month is continuing to grow. One of the ways it’s expanding is with their joint Live @ The World Series pre-game show, available on SI.com, FoxSports.com and the MLB on Fox Facebook page, featuring Tom Verducci and Ken Rosenthal discussing storylines before each game and taking questions from Facebook viewers. They’ll have a special edition Friday at 3:30 p.m. that will also feature broadcasters Joe Buck and John Smoltz. SI Group digital editor Mark McClusky spoke to AA Friday about this show, the SI and Fox Digital partnership so far, and what’s next.

Awful Announcing: How did this come together for you?

Mark McClusky: When we started this partnership with Fox, this was one of the first things we identified. With Fox having the broadcast rights to the World Series and Tom Verducci, who’s our premiere baseball voice, already being involved with Fox and already having that relationship, this was one of the first things we really looked at as a way to show what the partnership can do, that we can bring these two brands together and these two sets of storytellers together in a way that’s really powerful and unique.

AA: What’s going to be the value of this Live @ The World Series show to you?

MM: The value of it to me is really about giving the truly passionate fan an even deeper understanding of what’s going on and being able to extend the things that both of the brands do already. The fact that we can have Ken and Tom talking about things, the fact that we can tonight bring in Joe Buck and John Smoltz and have that level of insight, to me, it’s really exciting. I’m a baseball fan and actually a Cubs fan, so as much as I can hear and see about this, I’m totally excited to hear and see. Taking what we both do so well and being able to extend it is, to me, the value here.

AA: What’s the particular value of being able to feature Joe Buck and John Smoltz?

MM: Part of what you get when you have that rightsholder relationship is access, time with the managers, time with the players. SI gets incredible access too with people like Tom; when you read Tom Verducci’s story about Kyle Schwarber, he had details that nobody else had on how that happened. And so, to me, that’s really the thing, being able to leverage that access and those relationships to bring our audiences even deeper inside the game and give them even more insight.

AA: How does this fit in with your larger partnership with Fox?

MM: To me, this is an incredible demonstration of what we can do with that larger partnership, that it’s not 1+1 = 2, it’s 1+1 = 3 or 4, hopefully. You bring the best parts of our access, our brand, our storytelling and our heritage together, and get something that’s hopefully really interesting and compelling and different in the marketplace, and not just kind of the same thing that everyone else is doing.

AA: How is this partnership overall working out for you?

MM: It’s early days still, but it’s really exciting, I think, for everybody, that when somebody like A-Rod talks about his impressions of the Cubs, we can bring that onto SI.com, when somebody like Peter King and his Monday Morning Quarterback column can be there for FoxSports.com users as well. First, it’s exposing our audiences to everything across both brands. Then, to me, the second step is what we start to do here, “What can we create together around these huge tentpole events that is sort of unique and interesting?”

AA: Where are you hoping the partnership goes from here?

MM: There are more big events coming up, there’s UFC 205, there’s the Super Bowl. Fox has Super Bowl 51 and we’re really excited about that. We have some cool ideas around the World Cup as you start to look towards qualifying. Things like the Champions League, where Fox has rights. Things like that, we’re really excited about that. And we’re excited about what can happen on the business side of this too. Even with something like this that’s our first time out of the gate, with us being able to bring a sponsor like State Farm in on it, I think shows us that we’re on the right track, that there’s something here people are going to be into. As we get better and better at really leveraging everything at everyone’s disposal, all of these things that we have across this whole portfolio, then it becomes a very powerful thing, for audiences and for marketers.

MM: Watching the show, the thing that’s really powerful about it is the potential for interactivity. You’ve got Tom and Ken talking about the game, breaking things down with their storylines, but then you’ve got people on Facebook asking them questions that a producer can then bring straight to them in real time. It’s not broadcast, it’s not one-way, it’s a conversation they’re having with fans that are interested in this, and that’s a super-powerful change across the whole business. We think this is a great way to capitalize on that.

Thanks to Mark for his time. You can follow him on Twitter here. The pre-Game Three episode of Live @ The World Series will air at 3:30 p.m. Eastern Friday on SI and Fox’s digital platforms, including SI.com, FoxSports.com, and the MLB on Fox Facebook page.