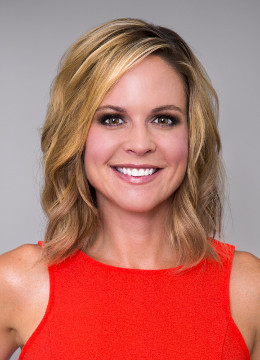 Fox announced a big hire Wednesday, bringing in veteran ESPN reporter Shannon Spake to cover college football, college basketball, NASCAR and selected NFL broadcasts. Spake took the time to talk to AA Thursday about leaving ESPN after 10 years, about why the Fox opportunity appealed to her, and about how the different sports she worked on stack up. Here’s a transcript of our conversation.

Awful Announcing: How do you feel about moving to Fox in general, and why did you decided to make the move?

Shannon Spake: I’m really excited. As I said in the press release, and I think it kind of sums things up, throughout my career I’ve wanted to work in a lot of different sports and cover a lot of different things. This opportunity at Fox is absolutely that, 100 per cent. It was just way too good. For me to be able to continue doing college football, and to do hoops, and to go back and do some racing, and some NFL and studio stuff, it is as diverse as it gets.

SS: I’m looking forward to being back in the garage. When I was at ESPN covering racing, it was all I did. We covered it from start to finish, the Nationwide series the entire season, and the Cup racing that we did, and it was a lot. I wanted to branch out into other sports and I did, but unfortunately in doing that, I lost racing, and then ESPN also lost racing. So to be able to continue to do what I’ve moved forward in doing, with college football and college basketball and hosting and the NFL, and to go back and do racing, is a dream come true.

AA: Is there anything really different in your approach to doing the sidelines for college football or college basketball and working on a racing broadcast?

SS: I think the biggest difference that I’ve noticed is when you cover racing, most of your information you’re going to get at the racetrack that weekend, be it after practice or before practice or on race day. With college sports specifically because you’re dealing with student-athletes, you have to make sure that you talk to them on the phone earlier in the week. They’re obviously preparing for this one game, they know what’s on the schedule, obviously it can change from week to week with an injury, but you can get most of your information, you have to get most of your information as far as preparation and stuff like that during the week. As far as covering the event and what happens in the event and the stories of the game, I really think NASCAR and covering racing helped me learn that skill. “What’s happening right now? Where should my eyes be right now?” There are a lot of differences, but there are also some similarities.

AA: Is there one sport you prefer to work on over another, or do they all stand out in different ways?

SS: If you ask me that question at the end of a season, I’ll tell you “The next one.” I love them all. I love the college hoops and I’m really excited that I get to continue to do that, I love the intimacy of it. I love college football and I love the pageantry of it. Racing is a family, and the events are so big and the fans are so loyal and excited. I’ve seen fans in the NASCAR garage more excited when Dale Earnhardt Jr. drives by on his golf cart than I think I’ve ever seen fans anywhere. They’re so passionate about their sport. That’s why when people ask me what I want to do, I say “A little of everything.” I feel like I’m the luckiest girl in the world.

AA: Was it tough for you to leave ESPN after spending so long there?

SS: The opportunity was so good that that certainly played into it, and made it a little bit easier, because I know that I’m going to grow and that I’m moving into a really great opportunity. But for sure, leaving the company that I’ve been with for 10 years where I have a lot of friends, and spend more time with those people than I do with my own family during the season…but these days, we’re all so connected. Just because I’m working for Fox, I still have so many really good friends at ESPN. They’ve been hugely supportive. I heard from so many people from ESPN yesterday congratulating me and wishing me the best. While I won’t have those four letters, ESPN, on my business card any more, it’s going to be a different company, I still feel very connected to all the people there, which is the most important for me.

AA: What are you most excited about?

SS: Just to start. Obviously getting the announcement out there, I’ve kind of been sitting on it for a little bit, and for me to be able to talk about it now…I’ve wanted to talk about it, and my poor parents, you know, they wanted to tell people, my husband wanted to tell people for weeks now. So just to get started, to meet people. One of the things that’s been cool about the past 10 years is I have worked with so many different producers, so many different play-by-play, analysts, directors, and I really feel all of that background has prepared me for this move, because it’s so seamless. I’ve met a handful of the folks I’ll be working with at Fox Sports, starting with college football. Obviously the NASCAR side, I feel like it’s family…it’s Vince [Welch], it’s Jamie [Little] (both formerly at ESPN), it’s all the people that used to be part of SPEED. I’m just looking forward to getting started.

SS: I feel like my kids are so funny; they’re excited. I take them to so many games over the season, the folks at the SEC have been great to them. So I’m looking forward to getting them back to the racetrack, getting them to some Big East games, and having them be a part of this as well.