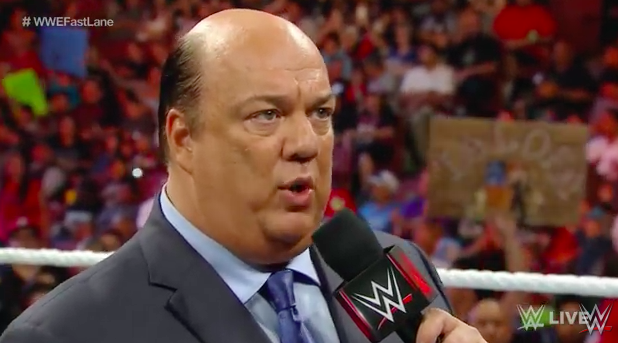 Earlier this week, Yahoo Sports announced a deal with legendary WWE personality Paul Heyman to distribute content from his successful Heyman Hustle website.  The distribution deal includes content from Heyman’s YouTube channel and will appear on Yahoo’s Turnstile blog.  Yahoo will also produce a special vignette about Heyman, “A Day in the Life of the Advocate,” that will follow his work with Brock Lesnar inside WWE and all of his work outside sports entertainment.

Just a couple weeks before WrestleMania 32, we were able to chat with The Advocate himself for an in-depth conversation about his new arrangement with Yahoo, the growth of Heyman Hustle, his long-standing partnership with Brock Lesnar and the upcoming No Holds Barred match with Dean Ambrose, and why Brock just might be the most underrated performer in WWE history.

AA: First question we have to ask – do you still have the old mobile phone from the Paul E. Dangerously days?

Paul Heyman: My children have inherited my mobile phone from the Paul E. Dangerously days just in case I ever decide to invest myself in a project so deeply that I drive myself into bankruptcy. My children will have an asset they can sell on ebay.

AA: For all the fans that know you from your time in sports entertainment and the readers of our site, how did you start the Heyman Hustle and how successful it’s been?

Heyman: The idea came from actually my reputation from within the sports entertainment industry as a hustler. So I decided to make fun of myself with the name of the website and the show. What it was designed to be was an expose of the real story behind the slight of hand – who holds the cuecards for the politicians, how you win at Three Card Monte, the guy that goes into the restaurant and always gets the best table. That’s a hustle. And how do people play that hustle and how do they become hustler was the mindset behind the launch of the Heyman Hustle brand.

AA: How did the partnership with Yahoo Sports come about and what was attractive about that deal to you?

Heyman: Every time I go onto Yahoo.com I start reading the stories and I get one paragraph and it says “click here to read more.” Obviously in this election year, a lot of stories have been about Donald Trump or Hillary Clinton or the economics behind the next president’s agenda. I liked how many financial or tech blogs have been on Yahoo and how much traffic these websites have garnered because of their association.

So when Yahoo reached out to me to do something as the kickoff for a relationship, I was willing to go all-in if they were because it’s already part of my day to search the headlines of Yahoo.com. To me, this was a global distribution, a platform that I wanted the Hustle to be able to exploit.

AA: How do you see Heyman Hustle and what you do online as something that you can do for the long-term and maybe beyond your days in the wrestling business?

Heyman: We have developed a real following for the lifestyle that we report on with the Hustle. Obviously we have the whole #HustleBootyTempTats phenomenon, which to this day I can’t find the words to convey how absurd the phenomenon truly is. We have some of the best young sports bloggers that are coming out of NYU and Columbia and Yeshiva and Brooklyn and Hofstra that are now writing for us. We have great self-described geeks that are now reporting on tech, and while we’re certainly not ready to challenge TechCrunch or Gizmodo yet, we are rapidly developing a reputation within the tech community as having an eye on startups like no one else.

So if you’re looking for the 18-24 demographic, I think the Heyman Hustle delivers it better than any other website out there because we have cool sports, interesting political discussion, all the startup news that you could possibly want, and the hottest women on the web all converging in one space.

AA: Personally how do you balance what you do outside WWE with what you do with the company?

Heyman: I work about 22 hours a day and I enjoy every moment of it.

Heyman: I don’t sleep that much, I come from a long line of insomniacs. I enjoy my life too much. I don’t have time to turn off the switch. If I’m sleeping I hope I’m dreaming of what project I’m going to be launching the next morning. This is too much for me. There’s too much enjoyment in what I do. I am genuinely exhilarated every single morning when my feet hit the ground because I truly enjoy the plethora of jobs that I have.

AA: What is it like being the advocate for Brock Lesnar in this current run with WWE where he has taken on this larger-than-life persona and become a special attraction every time he gets in the ring?

Heyman: There’s nothing different about being with Brock Lesnar day-to-day now than it was 14 years ago when we were first together in WWE except we’re both a little older and wiser and we both have more children than we did 14 years ago when we started together on television. Besides that there’s nothing really different about that man. His values are the same, his interests are the same, his desire and drive and ambition is the same. And his desire to be left alone by the world is the same except now he truly has the resources to ensure he gets left alone by the world.

The run we’re having now to me is based on the credibility that comes along with the fact that when he left WWE he didn’t just go do odds and ends, he became the undisputed UFC Heavyweight Champion of the world, knocking out Randy Couture and going on to becoming a three-time defending undisputed UFC Heavyweight Championship of the world.  He didn’t knock out some schlub, he didn’t knock out an interim champion, or someone who just fell into the division without a lot of competition – he knocked out Randy freaking Couture. Along with that comes an awful lot of credibility and with that comes authenticity and legitimacy that WWE can then exploit. So when we come into this run, you don’t have to imagine “wow, what would happen if this guy fought in UFC?” You know what would happen if he fought in UFC – he would take over the heavyweight division like he did. Now WWE fans have bragging rights, that’s the baddest dude on the face of the planet.

AA: Did you ever think any wrestler could make the German Suplex the most exciting and intimidating move in wrestling?

Heyman: As I told Steve Austin on his podcast, I think a headlock can become the most exciting move in professional wrestling/sports entertainment if it’s promoted right and done right by the right person on the right people, sold right by the announcers, pushed right by the promotion.

If on that 33rd week he grabs Brock Lesnar or John Cena or Randy Orton or one of the top names in the promotion, then you have a situation where people go “Oh my God, is he going to crack Triple H or Seth Rollins or Roman Reigns’ skull? Here it comes!” Either someone escapes for the first time in 33 weeks or this guy goes down too. Either way it becomes something of magnitude.

The German Suplex became big because he hit John Cena with 16 German Suplexes and the next night on television I talked about it, which is nothing out of the ordinary. I talked the talk and he walks the walk. And then we brand it and people catch on to it.

AA: What does Dean Ambrose bring to Brock as an opponent that is unique for this WrestleMania match?

Heyman: A level of excitement because he’s crazy enough to actually think he has a chance against The Beast Incarnate Brock Lesnar.

AA: How has the WrestleMania experience evolved since you’ve been in WWE with taking place in such huge stadiums now and taking on a bit more of a life of its own in sports and pop culture?

Heyman: It’s only going to get better because it’s a brand name that has now become the biggest spectacle of the year in sports entertainment, and that includes mixed martial arts. These events that become branded – the Super Bowl, March Madness, the World Series, these are the primary drivers for these sports and the lure for the fans of those sports, as I’ve experienced, is only getting bigger. The events around it are only getting bigger and it’s becoming a pop culture event and not just limited to WWE fans. There are people who come to WrestleMania that don’t follow the product the entire year, but it’s the spectacle and the magnitude and the enormity of this mega-event that people want to experience.

AA: Throughout your career you’ve been involved with so many people throughout WCW, ECW, WWE – who’s the most underrated superstar that you’ve worked with? 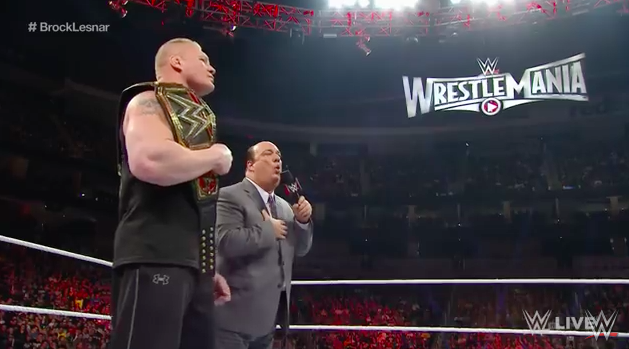 I don’t think people understand the level of performance he brings, I don’t think people understand just how great Brock Lesnar is. I think we’re only scratching the surface in demonstrating what his abilities are. I think Brock Lesnar can do anything. I think Brock Lesnar can just stand there and make people mesmerized by his presence as evidenced by the fact that most of the time we’re on television that’s what he does – he just has to stand there! And people are in awe of him.

AA: What is left for you to do in sports entertainment?

AA: But it seems like you’ve already done pretty much everything imaginable there is, right?

We’re in a whole new universe now so anything that I’ve accomplished in the past 30 years in this industry I would hope only pales by comparison to my next 5 years in this industry and I hope the next 5 years pale by comparison as well. It’s my job for Brock and my job for myself and my responsibility to my children to keep figuring out that next level and that next big thing so that we can not only be a part of it but that we can be on top of it as well.