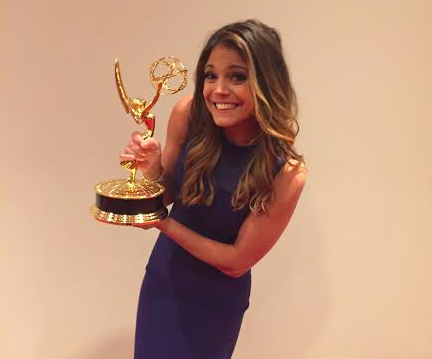 Katie Nolan and her Fox Sports 1 show, Garbage Time With Katie Nolan, being nominated for two awards at Tuesday’s Sports Emmys was already a feel-good story. She certainly didn’t expect to win anything.

One of the first awards handed out from Jazz at Lincoln Center’s Frederick P. Rose Hall in Manhattan was for Outstanding Social TV Experience, which pitted Nolan’s show against ESPN’s 30 for 30 production of I Hate Christian Laettner, FS1’s 10,000 Cameras: Talladega, social media integration for NFL Network studio shows and the 2015 Kentucky Derby broadcast on NBC.

With the show moving so quickly— the Sports Emmys have no commercial breaks— Nolan wasn’t ready for her category to be announced, as she’ll tell us. Still in a state of euphoria, Nolan did a quick Q&A with Awful Announcing, describing the moments leading up to and following the improbable Emmy win for her weekly sports comedy show, broadcast Wednesdays at midnight ET on FS1.

Awful Announcing: What were you feeling as you won the award?

Katie Nolan: I was backstage getting ready to present with Kevin Burkhardt. I was a little bit late, as I always am, and heard them announcing nominees, and they sounded like nominees that I knew were against us. And I looked up and I said “What category is this?” And then it said Garbage Time With Katie Nolan, and I said “Oh my god, this is our category, this is crazy.” And then I went back to what I was doing, because I knew we weren’t going to win the Emmy.

And then someone said  and I don’t know if you could hear it from offstage, I shrieked and went “WHAT” and I screamed and everybody started laughing. I didn’t even know how to get to the stage, I cried a bunch, I don’t remember what I said. I blacked out. And I’m very excited. The only-ish sad thing is that no one from my team is here and they’re great.

AA: It is a small space here.

KN: There’s only seven of us. We could’ve squeezed in.

It wasn't real until this moment. My team is THE MOST perfect and I love them. pic.twitter.com/qCPgnoS56Z

AA: You beat out all these huge shows.

KN: I don’t know. When I read the nominees—we were also nominated for Outstanding Studio Show – Weekly [with College GameDay, Football Night in America, Fox NFL Sunday and Inside the NBA] which there’s no way in hell… if that happens, I think I’m just going to quit forever because I peaked [College GameDay won]. I was like, we’re great and wonderful and it’s cool that we were nominated, but there’s no way in hell we’re going to win. I gave my staff the speech of “Be honored to be nominated, but let’s not get our hopes up.” And I was wrong, and an asshole. Because we won. And that’s really, really crazy to me, and an honor when you look at everybody that we were up against. 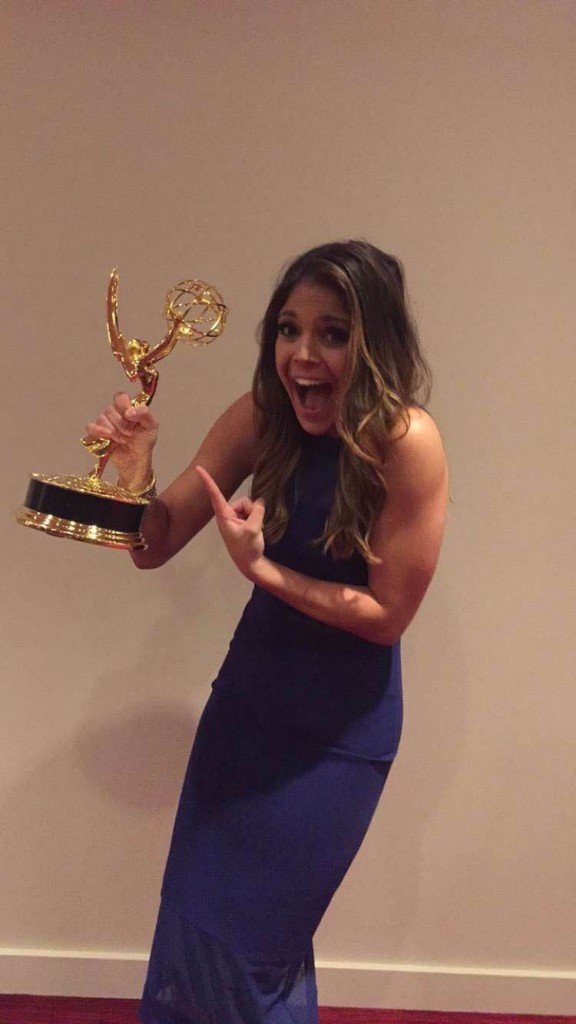 AA: What do you think this will do for the show?

KN: Hopefully, more people will know that it exists. I shook Shaq’s hand backstage and instead of saying nice to meet you, I said “Garbage Time With Katie Nolan on Fox Sports 1, please watch it.” So hopefully, he’ll love it and repeat it to all his fans and friends. I doubt it, though.

AA: Was your hand able to escape his grasp?

KN: Oh yeah, no. I shook his middle finger because I couldn’t hold… his hand is the size of my entire body.

AA: What are your expectations? What do you think is next?

KN: Oh, I have no idea. All I know is I’m never going to put this Emmy down and hold it for the rest of my life, I think. If that’s okay.

AA: I do have to ask about recent hires at Fox Sports 1 and new shows being formed, and what you think about that.

KN: I have honestly been so busy working on our show that I haven’t really thought about it. We’re in New York, they’re in L.A., so I haven’t really been paying attention to it. But I trust Jamie Horowitz, and I know that he’s going to do something where there’s a space for me in the network. I just have to trust what they tell me.