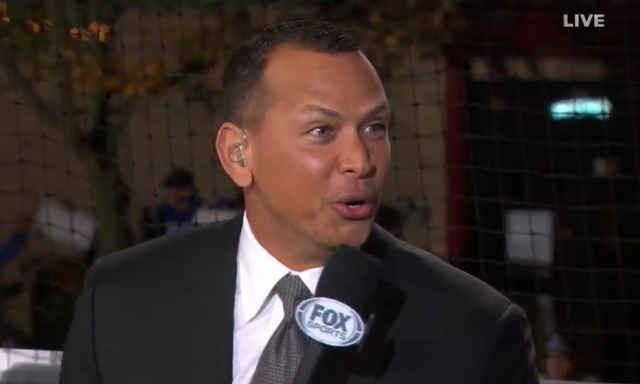 The MLB on Fox playoff pre- and post-game show has quickly become one of the most unusual and entertaining studio shows out there, with host Kevin Burkhardt doing a great job of directing traffic and analysts Alex Rodriguez, Pete Rose and Frank Thomas doing everything from nerdy film study to insightful hitting analysis to non-stop giggles to back–and–forths, especially between Rodriguez and Rose. The banter showed up again on several fronts after Game Four Saturday. First, they showed a clip of Rodriguez doing a hardware ad back in his Seattle days, which led to Thomas saying “You look like you were 12 years old,” Rodriguez saying “I was young and I needed some money,” Burkhardt asking “When’s the last time you bought your own refrigerator?,”  Rose asking “What’s your favorite tool, buddy? Do you have a favorite tool?” and A-Rod responding “Yeah, you!”

Pete Rose: "Do you have a favorite tool?"

Then, they showed a clip of Rose in a WWE match, and Rodriguez followed it with “Know what I’ve learned about you, Pete? You’ll do anything for money!”

Another night, another burn from A-Rod: "Pete, you know what I've learned about you? You'll do anything for money!" pic.twitter.com/TNVmStiUs0

The banter back and forth between these guys has been one of the highlights of this postseason, and it definitely makes for a more interesting studio show than the average. Chalk this round up for A-Rod, but we’ll see how Rose strikes back.