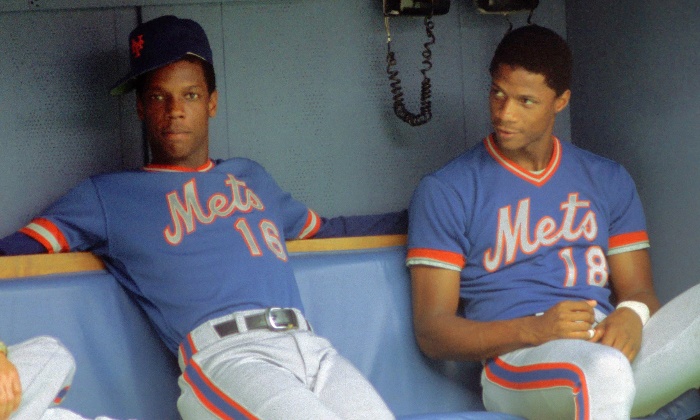 Installment – #85 by my count. ESPN considers this #88 when factoring in Down In Valley is suspended and the OJ was counted as five installments

Most Similar To – Unguarded, This Magic Moment

Review – Watching Doc & Darryl down the home stretch of its 78 minute runtime, I was sketching out my review in my head with the analogy that this was basically another base hit for 30 for 30. While ESPN segments the 30 for 30s in volumes of 30 (we’re almost through our third volume at this point), I segment them in smaller seasons as ESPN typically goes dormant with new releases for the bulk of the late spring and summer and then kicks off again at some point in the fall.

Doc & Darryl caps a pretty damn impressive year for 30 for 30 in which they almost went the whole calendar year with a new installment every month (there will be no release in August, ending a streak of 11 months). Some will point out that HBO in its sports documentary prime churned out four sports docs a year, most of which were home runs and thus had a higher slugging percentage. However, ESPN’s output of nearly one documentary a month to a much wider audience has potentially created the most prestigious brand in sports media (even if the output includes some singles and outs, along with the majority of home runs and doubles).

Unfortunately though, and continuing on this stupid baseball analogy, Doc & Darryl hits the bag at first and looks like a for sure double 85% through the film, but a perfect throw from the outfield causes the film to retreat back to first base. What do I mean by that?

It’s no fault of the directors, but the story just doesn’t have a natural ending. It’s not a tragedy nor a happy ending. Broken down, the film goes like this:

– 1/3 the rise of Doc and Darryl and the lowly Mets. This portion is very well done.

– 1/3 the fall of Doc and Darryl. This component is also well done and we’re essentially teased a happy ending as the two reminisce about their glory days as well as their troubled pasts. They are both here in the present, still standing, and thus we anticipate some turning of the page for both individuals.

– 1/6 a happy conclusion to Darryl’s struggles. He’s sober. He’s married. He’s successful. I forgot I saw an update on him on HBO’s Real Sports but again it’s a sigh of relief to see him doing well.

– But the elephant in the room is that Doc is still having his struggles and while that’s understandable and complex, it unfortunately gives the film a very unnatural ending point and tone.

I’m sure some may find that assessment to be tone deaf to the struggle of overcoming addiction, but one of the film’s directors essentially also found the tenuous state of Doc Gooden to be an issue to the point where he questioned his involvement in the project.

“Filmmaker Michael Bonfiglio “probably” wouldn’t have co-directed the ESPN “30 for 30” documentary “Doc and Darryl” had he known more about Dwight (Doc) Gooden before committing to the project.

“I want to choose my words carefully,” he said at a screening for the film at Hearst Tower. “My understanding of Doc’s situation evolved from the time the film was conceived and we began filming through to the end.”

He added, “When we started the film, we thought we were making a film about two people who had come out the other side and it would be a redemptive story for both of our subjects,” he said. “I think that he struggles.”

Other quotes from the same article:

“According to Bonfiglio, he was hoping the ESPN documentary, which airs on July 14, would have a happy ending. Now he says that he “probably wouldn’t have started” the project had he known Gooden better.”

“It’s impossible to really know what’s happening there,” he said. “I hope that those guys can stay strong and be sober and have good lives.”

Gooden’s current struggles are really not specifically called out or confirmed, although the comments above seem to acknowledge some knowledge that all is not well. The film runs some recent headlines that insinuate there are issues and there is some footage that other reviewers noted “Gooden appears sweaty and out of sorts“. Even without those subtle hints all might not be right, there isn’t really a narrative being sold of Gooden finding something new in his life, such as a love interest, a career, or religion, things that often serve as an impetus to change old habits.

It’s unfortunate for Gooden, the directors, and ESPN as the film is pretty damn solid all the way through but somewhat sinks in quicksand at the end without a narrative, message, or ending to tie it all together.

The first third was great. I started collecting baseball cards in 1989 when I was seven and thus I missed the high point phenom years of both Strawberry and Gooden, although I’ve always had some knowledge of them. The highlights, as well as a quick trip over to Baseball Reference, show I missed more than I thought, with Strawberry showing glimpses of a young Ken Griffey Jr (yes, I said it). Gooden was not even of drinking age when he went 24-4 with a 1.53 ERA and reminding me of a more powerful Pedro Martinez in his prime. This was the Doc and Darryl I never knew and I’m glad the film spelled out their early greatness.

The film pulls no punches in chronicling their downfalls. There is lot to go through there unfortunately but all along the way we’re being teased some sort of happy ending given both are here in modern times and nostalgically and warmly looking back at their glory days.  Darryl gets clean. Doc throws a no hitter during a time of personal crisis for his family. We’re on schedule for a happy ending, but it never comes and nor does a sad one ever fully announce itself.

Beyond the ending, a small nitpick is that Strawberry and Gooden while tied together in history, aren’t and weren’t ever that close. Friendly yes, but their connection was more so their meteoric rise and tragic downfalls that ran parallel but with some distance between them.

Ultimately, I’m glad I furthered my sports knowledge by watching but agree with the director that the timing wasn’t right for this project given we’re still hoping for the best for both Doc and Darryl. While there is a good story in here, it’s up in the air ending lends it to be a bit incomplete and the audience is left without much of a takeaway that leaves you in the same place as Doc’s mother when she says earlier in the film, “He tells me he is alright so I continue to pray for him.”