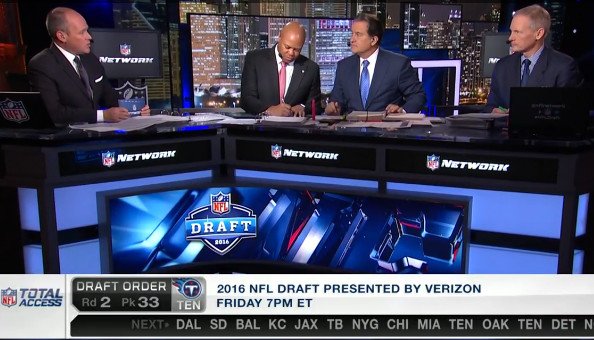 For another year, the NFL Draft was broadcast on two networks with NFL Network once again providing a secondary option for viewers from the traditional ESPN broadcast. With Rich Eisen and company now becoming as much of a staple on draft weekend as Chris Berman, Mel Kiper Jr. and the gang, the NFL Network coverage is no longer a fresh broadcast in its tenth year of sharing the draft duties. One of our Awful Announcing traditions is to evaluate each network’s draft coverage, especially for the first round; you can find our ESPN grades here. So in Year 10 of covering the draft, how did the NFL Network fare in their 2016 coverage on a night that featured plenty of drama due to Laremy Tunsil’s marijuana storyline and Myles Jack falling out of the first round entirely due to knee issues? Let’s take a deeper look by grading the NFLN broadcast from Thursday night’s first round:

The best part about sitting down to watch any NFL Network broadcast is having Rich Eisen in command as one of the best in the business. Eisen has earned his role as the face of NFL Network after leaving ESPN to become the face of the channel since its inception in 2003. It’s a move that’s paid off well for Eisen; after being one of the best sportscasters at ESPN, Eisen has cemented himself as the soul of the NFL Network, and it showed again on Thursday night as he was once again in control of yet another draft night. While ESPN has the tradition and the glamour of being a major network broadcast of the draft, each year Eisen’s flawless command of covering the draft from the hot seat makes it hard not to choose the other option.
‘
Ian Rapoport: A

Rapoport may not be as long a veteran of NFL Network coverage as Eisen, but like Eisen, he is quickly becoming a staple of their draft coverage. With Mike Silver doing war room coverage and Albert Breer departing to TheMMQB.com, RapSheet is firmly the top insider at the network and he fills the role well. He is quickly becoming a rival to Adam Schefter, if he hasn’t already, and it is nice to see his work on the other 364 days of the year as the top story chaser for NFL Network recognized by such a prominent role in the first round coverage.

Sanders is one of many NFL Network personalities who is there because they are a former player with tons of personality, a Michael Irvin type, which makes it seem like he would be a good fit for the post-pick interview role. He received plenty of criticism for how he handled it last year, though, and this year also saw several awkward moments for Prime Time.

Sanders’ interview with Goff seemed to be very uncomfortable as the first overall pick from Cal had a very boring interaction with Sanders. Of course, Sanders didn’t help himself by asking the first overall pick what he would like to “translate to the fans in Los Angeles,” despite having plenty of time to prepare a question for a pick that was always going to be Goff first overall.

"Is there anything you want to translate to the fans in Los Angeles?" — Deion Sanders to Jared Goff.

Another idiot found. Deion Sanders, telling Goff & Wentz when teams draft 1 & 2 theyre not in good situations. Those teams were 15 & 13

After the awkward interview with Goff, Sanders appeared to be handling the interview with Laremy Tunsil in the wake of the gas mask bong video quite well before asking the Ole Miss offensive lineman “what is he going to do to make this right” in a question that derailed what was actually an impressive hard-hitting interview from Sanders. The question came off as preachy, and after quickly answering all of the other tough questions Sanders had for him, the question threw the new Dolphins’ lineman off guard.

Sanders deserves credit for asking some extremely tough questions from Tunsil, but it is hard to ignore some of the awkward moments that come from having Deion interviewing the draft picks. Particularly the Goff interview in which a boring player clashed with the brash personality that Sanders still has, even now that he is in the broadcasting realm. Sanders did some very good work in a sideline reporter type of role that should be noted, but he also had some awkward moments that keep him from a great grade.

The NFL Network’s graphics for this year’s draft were really clean, flowing well with their highlights pack and popping out far more effectively than the ESPN’s darker feel. Using brightness and sleek silver lettering, the NFL Network’s graphics just felt more lively and exciting than the options on the other channel. As evidenced from the video below after Karl Joseph was drafted 14th by the Oakland Raiders.

NFL Films are the best in the business when it comes to presentation, so it is no shock that when it comes to graphics and highlight packages that NFL Network holds a direct advantage over ESPN’s coverage. With equal on-screen talent, presentation is everything and the quality that goes into the production of the NFL Network telecast makes it a very easy watch to sit down in front of the television for three plus hours of draft coverage.

Both Daniel Jeremiah and Mike Mayock did a solid job of informing viewers of each pick, trying to reference their boards when needed while also doing their best to avoid the cliched buzzword jargon that fills draft coverage. While it can often feel like the draft experts are recycling the same few templates of analysis for each player, Mayock continued to be one of the best in the business at informing the viewer of the nuances that go into scouting a college prospect while Jerimiah was a solid “B” expert complimenting Mayock’s analysis throughout the night.

For most of the night, Laremy Tunsil dominated the discussion on both broadcasts and the NFL Network managed to do a quality job in monitoring a story that had plenty of changing narratives and rumors. Beyond the hilariousness of NFL Network on-air talents saying the phrase “bong hit out of a gas mask” the story was covered well, and Deion Sanders’ interview with Tunsil has been the go-to for sound bites on Friday morning, making it all-around good work from everyone involved.

With top-notch presentation from NFL Films and some of the best broadcasting/reporting talent in the business, it is hard to not give NFL Network the nod over ESPN as a sports media nerd. Berman, Kiper, Gruden and co. over at the four letter may get the higher ratings, but the more informative broadcast is on the specialty channel as football fans would be wise to get their draft week fix from the NFL Network crew. Hitting their stride with a decade of draft coverage, it is becoming increasingly clear that the better option for draft viewing lies in the hands of the league’s flagship station. Getting better with each passing year, it is interesting to monitor the growth in coverage of the NFL Network when it comes to its marquee live event in the Draft.

View all posts by Chase Ruttig