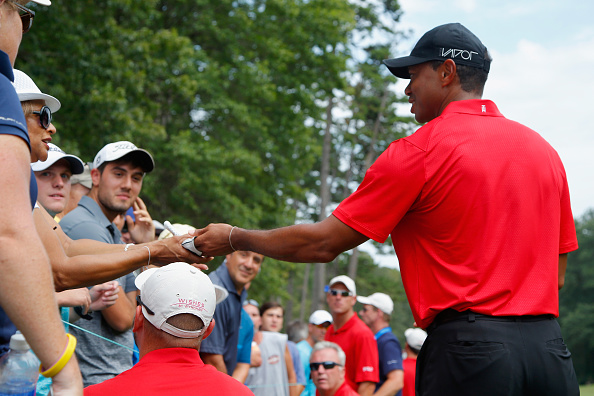 To most golf fans, interest in PGA Tour events year-to-year goes something like this: The Masters, the U.S. Open, the British Open and PGA Championship, The Players Championship…and everything else.

In the past, that “and everything else” would get a noticeable bump—sometimes into the “major championship ratings” category whenever the name Tiger Woods was near the top of the leaderboard.

Well was became is this weekend, as Woods somewhat inexplicably found himself in contention heading into Sunday’s final round of the Wyndham Championship in Greensboro, NC. From Sports Media Watch, the Tiger Bump was back.

With all due respect to the Wyndham brand, this event is usually a minor tournament on the PGA Tour schedule even by minor tournament standards, coming right after the PGA and right before the start of the FedEx Cup Playoffs.

That said, with Woods tied for second after rounds of 64-65-68 and needing a victory to qualify for the FedEx Cup field, interest was high on Sunday, even as he fell back to a tie for 10th with a final-round 70.

Most importantly, the event showed that Woods can still compete at an event with a top-tier PGA field, and that writing off his career as over at this point is foolhardy. Hell, Davis Love III won the darn tournament and that guy has just two career victories since 2004.

There’s hope for Woods yet, which means there is still hope for TV networks that televise golf.

A relevant and competitive Tiger Woods is always going to be good for golf. Seeing that quality return for the first time in nearly two years created a buzz that led to near-record ratings for an event that would have been otherwise ignored on the sports schedule this weekend.

Even without Woods playing six of the eight weekend rounds at the majors, this was one of the great major championship seasons in recent memory for the PGA. Jordan Spieth ignited the spirit of golf fans all over the country, while Jason Day’s emotional victory at the PGA tugged on our heartstrings and Dustin Johnson’s major rollercoaster ride made us collectively cringe in ways we haven’t since Phil Mickelson was going for his first major.

We are in an age that will be dominated by amazing young talent that could stay at the top of the game—like Woods did—for decades. But none of them provide the kind of bump in interest that Woods can, even now. Even Spieth.

So here’s a thought for next year: If Woods isn’t able to parlay this top-ten finish—his first top ten in almost exactly two calendar years—into a strong off-season to get back to his old dominant form in 2016, maybe the rest of the field could agree to lollygag through three rounds each week to keep Tiger in contention until Sunday.

Though for a guy who missed cuts at three of the four majors this season, that might have to be a lot of lollygagging.

What’s funny is that it would work, if by funny I mean horribly sad. The golf would be impossible to watch if the rest of the field conspired to tank just so Tiger could stay in contention every week, but there is no doubt the television ratings on Sundays would absolutely benefit.

Just something to think about for next year, PGA. Tournaments like The Wyndham, and your media partners, will thank you.