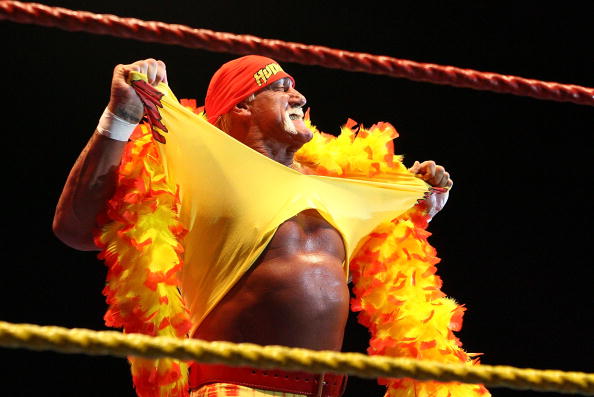 WWE Hall of Famer Hulk Hogan has mysteriously had any reference to him taken off the WWE website.

Hogan’s superstar page?  Deleted.  Hogan’s Hall of Fame slot?  Gone.  Any merchandise?  Disappeared from the face of the earth.  Any reference to his role of hosting the current reality show Tough Enough?  That never existed.

WWE released this statement saying it fired Hogan and then gave a generic remark about celebrating diversity:

“WWE terminated its contract with Terry Bollea (aka Hulk Hogan). WWE is committed to embracing and celebrating individuals from all backgrounds as demonstrated by the diversity of our employees, performers and fans worldwide.”

For his part, Hogan sent out this cryptic tweet in the early morning hours on Friday well before the WWE statement, which again is very short on details:

In the storm I release control,God and his Universe will sail me where he wants me to be,one love. HH

So what in the world could have happened for WWE to give its biggest superstar of all-time the Chris Benoit treatment?  And what does it have to do with “celebrating individuals from all backgrounds”?

While both WWE and Hogan are obfuscating the exact source that led to Hogan’s dismissal, social media chatter (Hogan has been the #1 trend on Twitter all morning) is pointing towards an obscure radio interview Hogan did in 2012 where he said the n-word multiple times.  Hogan begins by quoting the famous Botchamania interview of Booker T dropping the n-word in a promo towards Hogan and then continues with the references while admitting that he had “always said it.”

The bizarre thing about all of it is that the video was published on YouTube back in 2012, meaning it’s been living online for almost three years.  NOTHING controversial lives on the internet for three years without somehow being seen by somebody.  You can watch the video starting around the 1:45 mark.  The host of that interview with Hogan even tweeted a defense of the former WWE star.

nothing racist about that @HulkHogan 2012 interview I did. He was just explaining the usage of the Nword amongst his rapper friends and WWF

Is that video the real reason WWE has wiped Hogan from their past, present, and future?  Is there another Donald Sterling-type audio or video that’s yet to make its way to the surface?  Is there another reason entirely for WWE terminating Hulk Hogan?  Something clearly doesn’t add up all the way, here and we’ll continue to follow the story as it develops.

UPDATE: Donald Sterling-type audio or video it is!  National Enquirer and Radar Online published a joint report that exposes a transcript from Hogan’s sex tape that is at the center of Hogan’s ongoing legal battle with Gawker.  The tape apparently reveals the Hulkster using racial epithets and literally saying “I am a racist.”  Beware some NSFW language here…

“She is making some real bad decisions now,” Hulk said, sources tell us. “My daughter Brooke jumped sides on me. I spent $2-3 million on her music career, I’ve done everything like a jackass for her.”

The bitter bodybuilder continued, “The one option Brooke had, Brooke’s career besides me, is [to] sell beach records.”

At that point on the tape, the former “Hogan Knows Best” star bemoaned how a “black billionaire guy” had offered to fund her music career.

He also attempts to use bizarre, twisted logic in an attempt to justify his bigotry at the man.

“I don’t know if Brooke was f*cking the black guy’s son,” Hulk raved, the sources add.

“I mean, I don’t have double standards. I mean, I am a racist, to a point, f*cking n*ggers. But then when it comes to nice people and sh*t, and whatever.”

Then, in a tirade to rival the racism embarrassments suffered by Mel Gibson and “Dog The Bounty Hunter,” Hulk unloaded even more hatred!

According to sources, he said: “I mean, I’d rather if she was going to f*ck some n*gger, I’d rather have her marry an 8-foot-tall n*gger worth a hundred million dollars! Like a basketball player!

“I guess we’re all a little racist. F*cking n*gger.”

For what it’s worth, Hogan issued his own statement to People Magazine:

“Eight years ago I used offensive language during a conversation. It was unacceptable for me to have used that offensive language; there is no excuse for it; and I apologize for having done it,” Hogan said in a statement exclusively to PEOPLE. The transcript featuring that conversation was published online by the National Enquirer.

“This is not who I am. I believe very strongly that every person in the world is important and should not be treated differently based on race, gender, orientation, religious beliefs or otherwise,” Hogan told PEOPLE. “I am disappointed with myself that I used language that is offensive and inconsistent with my own beliefs.”

Yep, this sufficiently explains why WWE would give Hogan their own version of the big leg drop and put him down for the count.