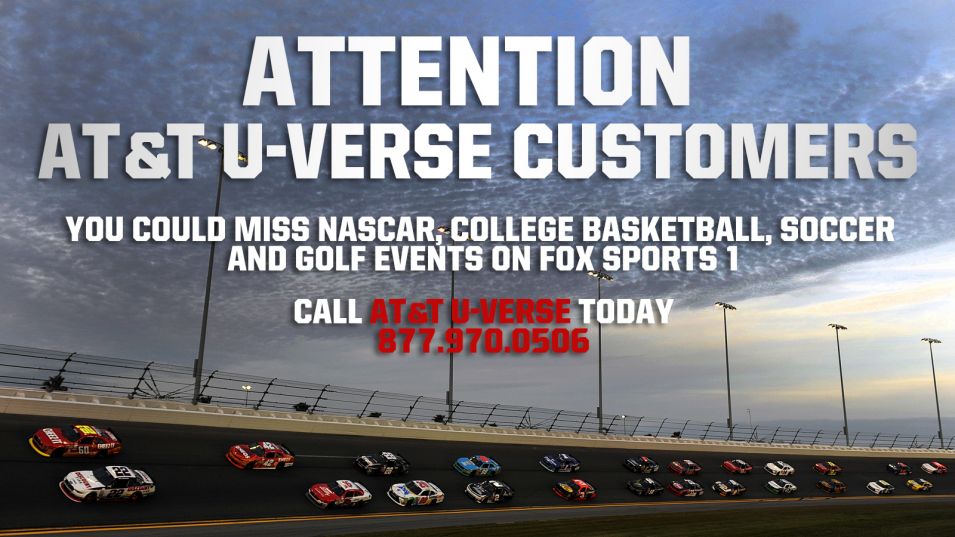 Sunday night, as I switched over to Fox Sports 1 to watch Garbage Time with Katie Nolan, I was treated to some darts. Why is that? I have AT&T U-Verse at my house, and there is still no agreement between FS1 and AT&T for certain live events, including last night’s soccer games. This squabble has been going on for a while now, which makes last night’s soccer issue nothing new. This is an issue over both the value of programming and, to take a term from one of the darts analysts, the “ludicrous figures” exchanged by the entities. It is an issue that likely continues throughout the summer and possibly longer, especially because of the specific events that are being disputed.

When Fox Sports 1 and 2 launched in 2013, their deal with AT&T U-Verse was made in a way that excluded additional contracts the network would acquire in the future. Though this has no effect on Major League Baseball or the Men’s and Women’s World Cup, events such as NASCAR XFINITY Series races, some U.S. Open golf, and all of FS1’s non-World Cup soccer have been blacked out and will continue to be replaced with darts reruns on U-Verse for the foreseeable future. Some of these will be blows to U-Verse customers, but plenty of this programming is not going to cause enough of an uproar. This means the bold red fonts and numerous warnings from FS1 will continue indefinitely. How long is indefinitely? Let’s floor the gas on our DeLorean and ramp it up to 88 MPH so we can look into the future on this one.

Before I look into my crystal ball, I should start off with last night’s programming. The first blacked out game was an MLS contest between D.C. United and Philadelphia Union. Unless you’re a die-hard American soccer fan, you’re not going to pay too much attention to out-of-market teams. In-market fans had no trouble trying to watch the game as U-Verse is unavailable in Virginia, Maryland, and Pennsylvania. Looking at upcoming MLS matches on FS1, August 2nd is the first of just three games this season where both teams are located in states that offer U-Verse. 12 of the 20 MLS teams are located in states that do not have AT&T U-Verse, so I can’t see subscribers clamoring for the lack of out-of-market soccer. Advantage: AT&T

Originally, this was set to span a total of nine races, but according to the NASCAR website’s official schedule, there are only two XFINITY Series races left on Fox Sports 1 before the series transfers over to NBC and NBCSN. Though NASCAR is usually thought of as a southern sport, the two races left to air on Fox Sports 1 are at Michigan and Chicagoland, respectively. Both of these Midwest states, as well as just about every state synonymous with NASCAR, have access to U-Verse, which is a feather in the cap of Fox. However, the XFINITY Series is secondary in both stature and ratings when compared to the Sprint Cup. It should be noted that these blackout issues do not affect the top flight in stock car racing and that the NBC portion of the schedule is not blacked out, but until then, these two races will be missed. Advantage: Fox Sports

Last night’s match between the USWNT and Mexico was blacked out, as will future non-World Cup matches involving any of the United States national teams. That said, this year’s Women’s World Cup will air as normal, as will all future World Cup matches. For the immediate future, this won’t be a problem for either side, and I can’t see the standoff lasting until 2018, so an agreement won’t be hinged on the pitch. Advantage: AT&T

We all want to watch the drama of what I hope will be a close final round between Jordan Spieth and Rory McIlroy, and we all will be able to do so. This only affects the portions of the first two days of the tournament when the coverage is on Fox Sports 1. Streaming of both days, which includes a featured group as well as holes 12 and 15, is unaffected. Looking at ratings for the 2015 Masters, ESPN saw growth to an average of 3 million viewers per day for the first two days of the tournament, but that was peanuts compared to the 14 million CBS drew on the final day, when Jordan Spieth ran away with the title. Though the Masters was an extreme example, it is evidence of an increase in weekend ratings compared to the first two days. Once again, this does not bode well for FS1. Advantage: AT&T

Should this stalemate last into winter, the one major conference whose basketball airs exclusively on FS1 could have their games affected by the lack of an agreement. Four of the ten Big East schools are located in states that offer U-Verse, mainly because the conference is not as east as its name would have you believe. There should be an asterisk in that last sentence because U-Verse television is not available in the greater Cincinnati area, which removes Xavier from the list and is a big blow to Fox’s hoops argument against AT&T. If U-Verse wants to enter into Cincy, they’ll need to make a deal with Fox Sports, but I have not read anything that would make me believe this is coming at any point in the near future. Advantage: AT&T

As the days, weeks, and months pass without AT&T U-Verse reaching a carriage deal with Fox Sports 1 regarding these events, it has become clear that Fox is not budging enough in negotiations. AT&T clearly has the upper hand because they do not need most of these events and have been making due without them thus far. Their subscribers are not located in places that would clamor for many of these events. The network’s biggest draws, Major League Baseball, World Cup Soccer, and NASCAR Sprint Cup Series races, are unaffected, which gives AT&T even fewer reasons to make a deal. Until then, I hope AT&T U-Verse customers continue to enjoy the red letter warnings and darts reruns they’ll be watching on Fox Sports 1.