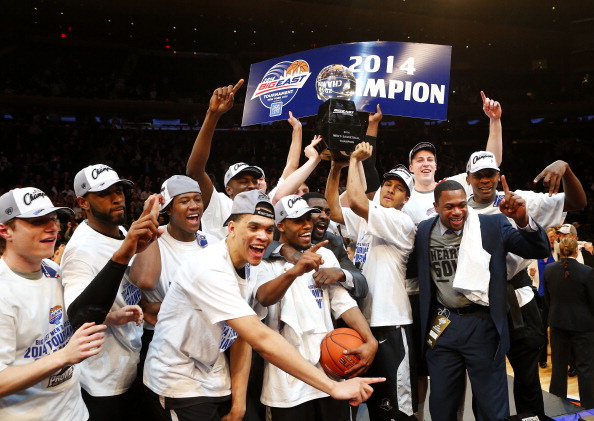 In previous years, there were a few days during Championship Week in which college basketball fans could have taken a break. Especially before the most recent wave of realignment brought about the era of the expanded (14- or 15-team) conference, Tuesday and Wednesday of Championship week were comparatively quiet.

This year, you will have more major-conference tournament basketball to watch if you so choose.

With 14 teams in the Big Ten, that conference tournament has gained a day and two games. The SEC tournament expanded in a similar manner a few years ago, but the difference this year is that SEC Network, in its first March go-round, can now bring us the SEC first round on Wednesday.

There’s one other particularly noteworthy change to the Championship Week schedule: The ACC has decided to put its tournament championship game on a Saturday for the first time since 1981. One assumes the move is inspired by the desire to make sure the Selection Committee fully values the accomplishment of the winning team, instead of risking that the committee puts the bracket in place Saturday night and discounts the importance of a Sunday afternoon final. Regardless of the reasons for the move, the ACC’s schedule change means that the first round of its tournament must be played on Tuesday, not Wednesday.

How do these tournaments stack up against each other in terms of watchability?

Let’s answer that question, accounting not just for the teams and matchups, but also the broadcasters involved. How much you weigh each component (some of you will care a lot about the broadcasters, others won’t) will affect your own rankings. Here’s one set of rankings — the best thing one can do is to acknowledge each of the different components of a broadcast. Only you can decide which components matter more… or less:

One final note before we begin: The line between a major and non-major conference is a little more arbitrary in basketball than it is in football. Let’s allow The American and the Big East to join the power 5 conferences, giving us seven conferences to rank.

The rankings list is ready to roll, based on this schedule of announcing teams from ESPN:

(For partial listings and assignments for the coming week beyond ESPN, see this link.)

Dave O’Brien and Doris Burke are very enjoyable to listen to, Mike Patrick and Len Elmore not so much. The announcing teams offer a mixed bag, but the basketball quality is not that special. No team in The American is expected to get anything higher than a No. 6 seed or make it out of the first weekend of the NCAA tournament. Moreover, if Connecticut — the host school — is ushered out of the tournament in the quarterfinals, you’re going to have oceans of empty seats in Hartford for the semifinals and finals. Tulsa, the No. 2 seed, is on the wrong side of the bubble. This just isn’t a compelling league to watch in 2015; only a Cincinnati-Connecticut quarterfinal shapes up as a particularly compelling contest.

It’s true that Villanova lost in the quarterfinals last year, but the Wildcats are even more the class of the league this season. Last year, the Big East had electric non-Villanova players such as Doug McDermott of Creighton and Bryce Cotton of Providence. There are no such equivalents this year.

Gus Johnson and Bill Raftery of Fox Sports 1 will give many fans a lot of pleasure — and a trip to the vegetable cart for some (RISE AND FIRE-) seared #ONIONS — but the Big East is a little more than a rich man’s version of The American. The basketball should be moderately better, and Villanova’s a genuine big hitter, but there isn’t a particularly electric matchup on the board with the possible exceptions of Villanova-St. John’s… and Villanova absolutely demolished the Johnnies this past Saturday.

Brad Nessler and Sean Farnham will work some of the early games in this tournament, and Nessler will be joined by Dick Vitale for the semifinals and final, so that’s not a bad combination of play-by-play and analysis. What will be bad is the level of competition in the SEC. Yes, the conference has a pretty good shot at landing four teams in the Big Dance, more than last year. (It could even get five, though probably not six.) However, SEC teams have positioned themselves to make the NCAAs by manipulating the RPI, not so much by looking extremely impressive on the court. (Notice how SEC teams in non-football sports also know how to schedule well.)

Last year, Kentucky did underachieve during the regular season, but the Wildcats always possessed the talent of a team that could become something special. Kentucky fought Florida to the wire in a memorable SEC tournament final in Atlanta.

This year’s No. 2 seed, the challenger to top-seeded Kentucky, is an Arkansas team which didn’t belong on the same floor a few weeks ago in Rupp Arena. The SEC final might be worth watching, if only because Kentucky would try to enter the NCAA tournament without a loss. However, the whole of the tournament just doesn’t stimulate the senses.

The Pac-12 just isn’t very good this year, though. The league has only three teams safely in the NCAA tournament. An Arizona-UCLA semifinal might be the one game in this tournament that’s truly worth watching. Even if BILL WALTON is on the call, a tournament with only one potentially compelling game isn’t much of a viewing destination — not in this person’s opinion. The basketball has to hold one’s interest.

A large swath of the college basketball community might cringe when it watches Virginia, but the Cavaliers are just fine by me — they play disciplined defense and always hustle. What’s not to like about that? The real problem with the ACC is that there are not that many great teams. There’s Virginia and Duke, then Notre Dame as an enjoyable but flawed alternative… and then a lot of teams that are hard to watch.

Louisville and North Carolina are exasperating in their own ways. Neither team gives the appearance of being ready to win three or four games in consecutive days. Sure, Dan Shulman and Jay Bilas — an elite broadcasting pair — will call the tournament’s final few rounds. Yet, is that enough to make me want to watch if there are other better options? I would prefer to watch the next two conferences on this list:

The Big Ten tournament would seem to point to a victory by Wisconsin. It’s true that the Badgers haven’t won this tournament since 2008, but really — how are they not going to celebrate on Sunday in Chicago? Maryland, the No. 2 seed, is lights-out in College Park but very ordinary away from home. Purdue is an overachieving No. 4 seed — the kind of team that wins admiration in the heart but doesn’t offer the kind of heavyweight presence we’re used to seeing from the Big Ten in the semifinal and final rounds of its tournament.

Yet, for all the ways in which the Big Ten might be down relative to 2014 — when the conference put three teams in the Elite Eight — the surprising successes of Maryland and Purdue will give this event a new feel, one that could produce a curiosity factor. I just might want to see how unpredictable this tournament could become in the bottom half of the bracket, where we could very possibly see a Saturday semifinal between No. 7 seed Indiana and No. 6 seed Ohio State.

Speaking of a curiosity factor, however…

The biggest reason the Big Ten makes No. 2 on the watchability list is that Jim Nantz, Bill Raftery, and Grant Hill — the CBS announcing team that will take us through the Dance on The Road To The Final Four — will call both of Saturday’s semifinals and Sunday’s final. Almost everyone who cares about the televised product of college basketball wants to check out this crew and see how it works (or doesn’t work). Raftery, with or without a third person in the booth, has always been the natural successor to Billy Packer alongside Nantz. Now that he’s where he belongs, it feels something long neglected in college basketball television has finally been repaired and made whole.

While we’re on the subject of Nantz and Raftery, by the way:

No, the Big 12 is not — far and away — the best conference in the country. Oklahoma and Iowa State spent the last few weeks of the Big 12 season suffering perplexing losses that prevented them from catching Kansas in the standings. Speaking of Kansas, the Jayhawks are banged up and struggling. They’re far from their best right now as measurements of both precision and physical wellness. The Big 12 does not have a single elite team — “elite” being defined by a team you’d give a reasonable shot against Kentucky.

However, the Big 12 does have a lot of really good teams. The coaching in this league stands a cut above many others. The upper half of the 10-team conference is very comfortable playing an open-court style of basketball. Last year, a 7 seed (Baylor) and a 4 seed (Iowa State) met in the tournament final. If that scenario repeated this year, it wouldn’t come as a complete shock. You should get an entertaining, if unven, brand of ball in this tournament.

With Brent Musburger joining the always-sharp Fran Fraschilla for most of this tournament, the Big 12 offers the best blend of interesting basketball and enjoyable on-air commentary.