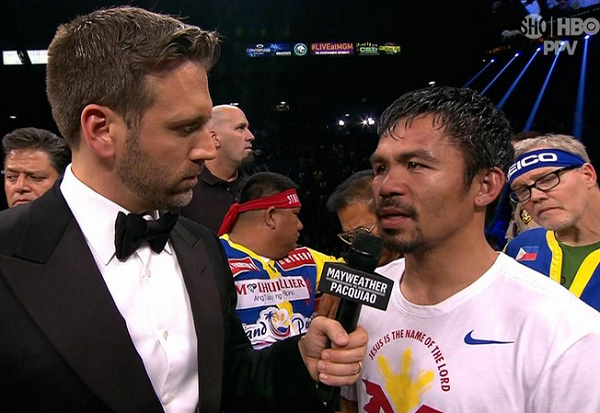 In the moments following Manny Pacquiao’s loss in a 12-round decision to Floyd Mayweather on May 2, HBO broadcaster Max Kellerman didn’t make himself very popular among the Pac Man’s fans with a tough post-fight interview in the ring.

What particularly seemed to fuel Kellerman’s line of questioning was Pacquiao’s contention that he won the fight, contrary to the judges’ scorecards and virtually everyone who watched the bout. That drove many fans to rip Kellerman on Twitter, calling him “rude” and “disrespectful” (among the kinder insults).

But during HBO’s reairing of the Mayweather-Pacquiao fight, prior to Saturday’s bout between Canelo Alvarez and Chris Kirkland, Kellerman defended Pacquiao and his decision to fight with an injured shoulder while discussing the results with Jim Lampley. That may have surprised some viewers and fans who believed the long-time analyst somehow held a grudge against Pacquiao.

Here are Kellerman’s remarks from the broadcast:

If you’re not able to watch the video clip above, a transcript of what Kellerman said:

“I think some people had the sense that Manny Pacquiao sold out for the money, and by fighting with a torn rotator cuff somehow perpetrated a fraud on the public. I strongly disagree with this. A dilemma is not a tough choice. A dilemma is a choice between two bad options.

What was Manny Pacquiao supposed to do? Three weeks to go before the fight when he was diagnosed with a torn rotator cuff that needed surgery, was he supposed to postpone the fight? So, 12 months off, he already was off for five months, he’s supposed to come back after shoulder surgery and a 17-plus month ring absence, to fight and try to beat Floyd Mayweather? Does that give him his best chance to win? When all the tickets have already been sold? The hotel rooms have been booked? The airfare, etc. The eyes of the boxing world hoping to see this fight and this event. What did Manny Pacquiao do? He manned-up. He said ‘if I can get a shot of toradol in my shoulder, I can go through with this fight, I think that gives me my best chance to win.’

By the way, if he postpones, there may never be a Mayweather-Pacquiao fight. Who knows if Mayweather’s even still active 12 months-plus into the future? So Pacquiao’s camp clears it with USADA, the drug-testing body that Mayweather’s side insisted upon. USADA says ‘Fine, a shot of Toradol is fine’ and then ultimately at the 11th hour, the Nevada State Athletic Commission says Pacquiao can’t get the shot of Toradol because of what was essentially was a clerical error? Because some box wasn’t checked off? A form wasn’t filled right?

If people are mad at anybody for Pacquiao not being at his best, if that’s the belief, be mad at the Nevada State Athletic Commission, in my view, because just when the boxing world most needed them to show sound judgement, they decided to stand on principle instead of cooperate with the spirit of the event.”

Kellerman raises an excellent point. Many who were critical of Pacquiao’s decision to fight with an injured shoulder said that he should not have agreed to fight and the match should have been postponed. But with everything that had already taken place — ticket sales, pay-per-view buys, hotel reservations, etc. — canceling the bout was far easier said than done.

In any other sport, athletes take steps to compete when hobbled by injury. Pacquiao did the same, yet wasn’t allowed the treatment previously agreed upon in a last-minute decision. We laud athletes all the time for “playing hurt,” yet Pacquiao wasn’t only criticized for doing just that, he’s facing several lawsuits as well. (Though understandably, there was a lot of money at stake from viewers and bettors.) Kellerman, though initially incredulous at Pacquiao’s post-fight remarks, is merely pointing out a curious double standard.