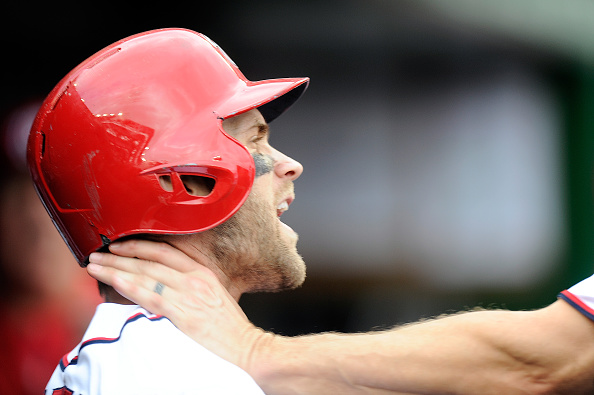 When half the team looked around for a thesaurus, the old guy chuckled, turned his head and said, “you know…balls.”

The speech worked, as our team started to play harder and faster, taking on all comers and rapidly beating them with ease and pleasure. We found the intestinal fortitude needed to win. We found our balls.

I wonder if that old coach was Washington Times scribe Thom Loverro, because he wrote this week that the only thing missing from the Washington Nationals becoming a championship team is precisely what our team needed to find, and what Jonathan Papelbon brings to the Nats’ clubhouse.

When he arrived in the Nationals’ clubhouse at the end of July following the trade from the Philadelphia Phillies, Papelbon looked around and saw the same thing that San Francisco Giants pitcher Tim Hudson saw before the National League Division Series last fall.

“Obviously, they have a talented group over there, there’s no question,” Hudson told reporters.”They have some great pitching. But, come playoff time, talent can take you a long ways, but what do you have between your legs?”

Okay, let’s stop there for one second. Some internet types seem to take that as Hudson—and therefore Loverro in using the quote—questioning the size, or I suppose mere existence, of the Nationals’ players collective “manhood.” Some people think the quote means Hudson said last year that the Nats don’t have big enough penises to be winners; or, perhaps any penises at all, suggesting they are inferior baseball players because they lack the parts that make them men.

Yes, the problem is what's between their legs: penises. Most of the world's problems are caused by people with them. pic.twitter.com/dMvDQno8Xy

Personally, I’m with Dan Steinberg of Washington Post’s DC Sports Bog who is usually on the um, ball, with all things Nats.

Until sabermetrics finds a way to properly measure and account for sack size, I'm out.

Perhaps the experts on all things Washington manhood would be the wondrous wizards of @wzzntzz:

the SACK UP movement has begun'd!!!! truck nuts as power source, baseballin' as life naditude. GET A PAIR 2DAY https://t.co/kQxS5RLS3u

Regardless of which part of the “between their legs” anatomy Hudson was referring, Loverro resoundingly echoed the sentiments about this year’s disastrous second half.

That is the reputation of the Nationals throughout baseball — they aren’t very tough. The prevailing thought is there is not a lot of fire there, not a lot of nerve in that clubhouse — and that was certainly on display this season during the team’s failure to catch the New York Mets in the final weeks of the season.

It’s the players, and, like Hudson said, what is between their legs.

Loverro was quick to point out he feels Papelbon must have seen that in his short tenure in Washington, and despite suggesting his method of increasing the Nationals’ collective manhood by choking the head, er, best player on the team was “misguided,” Loverro made sure to doubling down on how great it was.

Despite the outrage throughout the Western world, some within the Nationals organization respect Papelbon and what he was trying to do.

Or, and just play devil’s advocate with me here, Papelbon was and is a disaster and his inclusion in the clubhouse coincided with the team that was in first place by a full game absolutely imploding out of playoff contention. And then he choked the team’s best player after calling him out for being lazy. This all from a guy who has historically refused to pitch more than one inning and has never run out a ball to first base in his career because he hasn’t ever had a Major League plate appearance. He is the arbiter on baseball work ethic.

All this may seem stupid to outsiders, and old school baseball foolishness. And Papelbon — a newcomer and relief pitcher who has struggled since coming to the Nationals — may not have much standing in policing the Nationals’ clubhouse.

But he was just delivering the message that others throughout the game believe — the Nationals are missing something.

There’s one thing for sure the Nationals are missing this year: the playoffs.

But chin up, Thom. You’ll have the Redskins’ balls to question for a few more months.