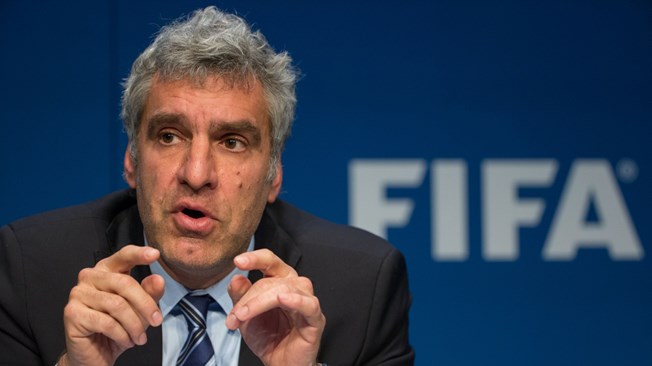 If there was one person you would have never thought could have saved his job amidst the FIFA scandal after shoes started dropping left and right around the organization’s headquarters in Zurich, it was FIFA Director of Communications Walter De Gregorio.

When a PR disaster of this historic level occurs, up to and including the scam of voting for an incumbent president and conducting an “arrest me for what” style press conference just hours before that president resigned, how is it not the PR guy who is the first to go?

FIFA has failed at a lot of things, but relating to the public is really, really high up on that list. And yet, until today De Gregorio still had his job. Perhaps Blatter was planning to keep him around long enough to shred all the documents and dig the ditch for the rest of the bodies before throwing De Gregorio in himself last.

Today was that day.

What’s awesome about this story isn’t that De Gregorio lost his job as the equivalent of the PR guy on the Death Star— “Sal from Tatooine Tribune, next question…no, do not worry about what you’ve heard. There are no design flaws in the Star. None. Zero design flaws. Next question…” —it’s how he lost his job. By telling a hilarious joke on Swiss TV. From BBC.com:

Fifa announced in a statement that De Gregorio had “relinquished his office”.

But the BBC understands he was asked to leave by president Sepp Blatter.

If you’re going to go out, THAT’S the way to go out. This is the best “you can’t fire me I quit” moments I remember, and something De Gregorio has probably wanted to do since he took the role in 2011.

The BBC report goes on to indicate that De Gregorio has been uphappy—ya think?!—because he was recently criticized in a Swiss publication by another PR professional who was a close, personal friend of Blatter and someone Blatter had occasionally employed in an ad-hoc capacity. Nobody around FIFA had any idea how to relate to the public!

The best news of all is that the FIFA statement on De Gregorio’s departure says he will serve in a consultancy role until the “end of this year.”

It seems Blatter still has more shredding and burying to do after all, which is odd considering the Swiss authorities seized everything  this week from FIFA’s offices.

Fired or resigned, De Gregorio may want to keep digging. One never knows if the opportunity to throw Sepp into a hole might arise between now and the FIFA emergency committee vote for a new president on July 20th.