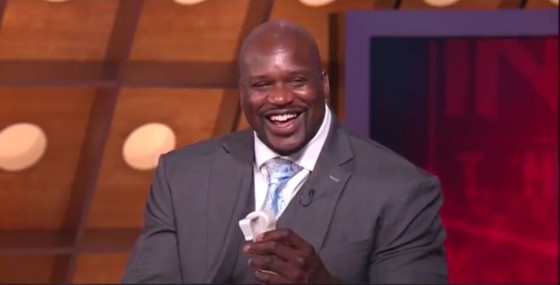 Something very strange appeared on Shaquille O’Neal’s official Facebook page last night.  This post appeared seeming to raise the question that there was more to 9/11 than meets the eye and that it might have been an inside job.  You’ve probably seen a very similar post on Facebook from that strange relative who still has the giant stash of toilet paper left over from Y2K and keeps posting about false flag operations. 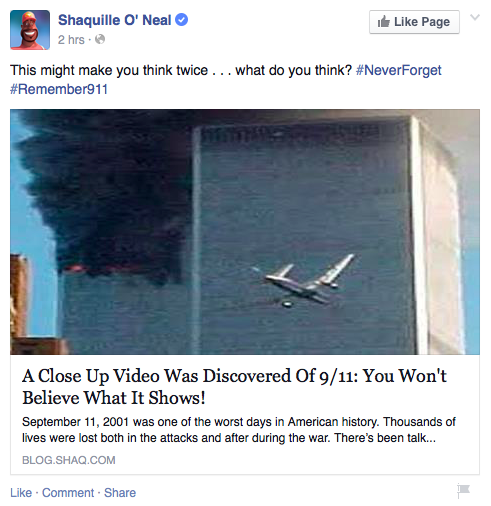 Shaq’s personal website also posted the 9/11 video with the line, “So what do you think… was September 11 an inside job? Or, was this video tweaked to make us think that it was?”

Both the Facebook post and the blog post were deleted, so what the heck happened here with the NBA on TNT funnyman and Hall of Famer?

Shaq’s Facebook page is a strange aggregation of Upworthy-esque stories mixed in with a couple selfie videos to remind you that it is indeed Shaq at the controls.  His Facebook page is seriously just filled with links to stories like chimps finding booze in the wild and DIY mosquito traps.  So maybe it’s not too far-fetched to think that Shaq was browsing his news feed one day and was actually convinced to think twice about 9/11 from one of those YouTube conspiracy theorists and share it.  Either that, or his social media accounts were hacked by Pete Carroll.

UPDATE: Shaq has released a statement saying he is not a 9/11 truther, but someone at the company he pays to represent him online could be?

This post was insulting and offensive, and I apologize to everyone who came across it. Once I learned that it was on my Facebook page and blog, I ordered it removed and fired the firm that posted it. I am not and never have been a “9/11 truther.’’ My father served our country and I am immensely proud of the sacrifices people make daily to keep us safe. The events of 9/11 were a horrible tragedy for our nation and it’s a disgrace that anyone would think otherwise.

The company, Digital Mavericks, also released a statement saying that this person’s link did not represent the views of Shaq… which is odd, because that’s exactly what he was paying them to do.