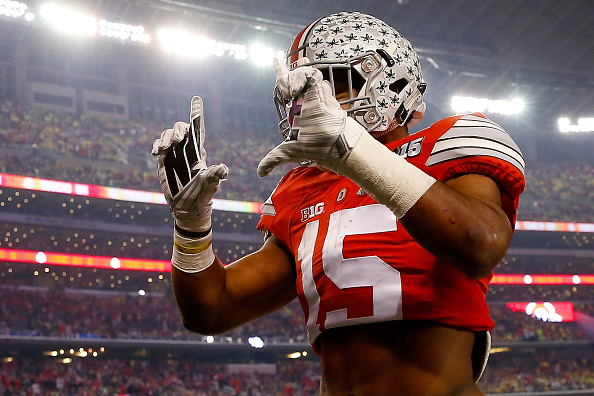 If you spend any amount of time around media types, you’ll hear plenty of complaints about how athletes only offer clichéd comments to the media, especially immediately after games. The reverse happened in the wake of Ohio State’s loss to Michigan State Saturday, with running back Ezekiel Elliott criticizing the team’s playcalling after his 12-carry, 33-yard performance, and the subsequent (and largely ridiculous) backlash against Elliott illustrates the double standards some media members hold for athletes, wanting them to be interesting but then blasting them when they are. It also shows why athletes often stick to the clichés: they may be seen as boring as a result, but that can be an easier side to err on, given the pitfalls that come with being seen as controversial. Here are Elliott’s comments:

The key part of his comments: “I think I do deserve more than [12] carries. I think I really do. Honestly, I can’t speak for the play calling. I don’t know what was going on. I don’t know what they were seeing. But honestly, it didn’t work out. It wasn’t working.” It’s notable that these were not unprompted; they came in response to a question about how many carries he received. (Update: The specific comments in this clip came in response to that question, but Elliott brought up the subject first, so this was somewhat unprompted on his part.) Nevertheless, this sparked plenty of criticism of Elliott from certain corners of the media, with CBS’ Doug Gottlieb going particularly heavy (starting at 1:00):

“We have learned to accept unacceptable behavior,” Gottlieb said. “It is completely, and always, and thoroughly unacceptable, to, in front of a hot microphone, ever say anything about your boss. Right? How long do you think it would take between when I turn off this microphone and when I walk to my office, which is 30 steps away, for me to be fired if I say, ‘I don’t know why such-and-such was on this game, I can’t believe we have so-and-so hosting a radio show. I can’t speak to the program directors here at CBS Sports Radio, but what the hell are they doing in this timeslot? I should be on in that timeslot.’ How long do you think that would last?”

“But here’s what we do; we create this imaginary world with unicorns where it’s okay for Ezekiel Elliott to call out his coach, because that’s what he did, and what happens when he gets to the real world? You can be right, and he wasn’t necessarily wrong. I mean, look, Michigan State was magnificent, Ohio State had 132 yards of total offence, there just wasn’t that many plays. I hate to be that guy to explain it to Ezekiel Elliott and anyone else; there just wasn’t that many plays. We would have liked to give you 30 carries, there just wasn’t that many carries. There were 29 carries the entire game. …I’m an Urban Meyer defender, because he’s been so successful everywhere, but is it any surprise he’s had so many guys have trouble after playing at Florida when he finds excuses for their behavior? It is always, always, always unacceptable to ever call out your coach, and that’s what he did. And then the only thing worse is his weak-ass apology which wasn’t an apology.”

Gottlieb is far from the only media figure to criticize Elliott (the Twitter comments from Seth Davis, Jeff Schultz and some others were also notable, and Richard Deitsch has a roundup of some other problematic ones), but his rant is particularly bad because it’s full of false equivalencies. First off, comparing criticism of a coach to the legal troubles former Florida players have gotten into is insane; Elliott’s comments certainly aren’t a criminal matter. Beyond that, Gottlieb’s attempt to compare his job to Elliott’s makes no sense here, especially as this is an NCAA athlete we’re talking about; Gottlieb chooses to work for CBS and is paid handsomely for doing so, while Elliott is forced (by a lack of a plausible alternative) to play football without being paid in order to bolster his NFL stock, receiving only a scholarship (which itself isn’t as valuable as it would be to a non-athlete, given the demands of college football and the limitations it often places on what you can do on the school side). Elliott’s agency in the process is limited to choosing a school initially, deciding to stay there or transfer (and the NCAA transfer restrictions limit how much of a choice that is), and deciding whether to leave for the NFL after his junior season or not. He’s picking where he plays, but that’s about it, and this isn’t so much a job he’s choosing as a process he’s forced into in order to become a professional football player. (The NCAA and its defenders will insist that it’s not a job, too.) Expecting him to be a good corporate soldier when he isn’t paid at all is a little much.

Gottlieb’s rant is also hilariously wrong because it misses the significance of value and rarity. Yes, Gottlieb might get fired if he criticized management, but that has less to do with criticism of management always being wrong and more to do with how easy it is to find someone to talk about sports for a few hours a day. (There are tons of local radio hosts out there who would probably do a better job with Gottlieb’s platform.) By contrast, any action Ohio State took against Elliott would hurt the team, as he’s one of their best players. They need him far more than CBS needs Gottlieb, and they can’t easily replace him. It’s notable that criticism of coworkers and/or management isn’t always “unacceptable” in media, either; you just have to be careful how you do it, and talented enough to not be easily replaced. Fox is fine with back-and-forths between their employees, and even ESPN (which usually clamps down on that) let Bill Simmons get away with a decent amount over the years.  So, it’s too bad for Gottlieb that he’s not important enough to say what he thinks without getting fired, but that doesn’t make it a universal truth.

What’s funny here too is the insistence that players’ criticism of coaches is “always, always, always unacceptable,” which is a view far from limited to Gottlieb. Why, exactly, is it so “unacceptable”? Gottlieb and his ilk spend plenty of their time criticizing coaches from a distance, so why shouldn’t those on the inside be able to say what they think? It’s notable that Elliott’s comments really were rather moderate; he didn’t call out a specific coach by name, he didn’t say any coach was particularly terrible overall, he included the caveats of not knowing what the playcallers were seeing, and he merely questioned a specific decision of theirs (to give him just 12 carries). He isn’t necessarily right (the counterargument is that if he’d picked up more than 33 yards on his 12 carries, he probably would have gotten the ball more), but there’s no reason his perspective shouldn’t be invited. If anything, it adds to the discussion much more than any amount of sports talk bloviating about Ohio State’s playcalling does.

The cult of coaches as military authority figures who can’t be questioned from the inside (but yet, can have their moves endlessly debated by the media) is a problematic one, and it’s part of the issue here, but the larger problem is that many media members are pursuing a double standard here. They want players to be interesting, and to give thoughtful responses, but they’re going to criticize players for any response they don’t agree with, especially if it’s seen as subverting authority.

These comments can have real-world financial consequences too; see all the discussion this weekend about if Elliott’s draft stock will be impacted by what he said. (From this corner, that seems insane considering the much more severe offenses that don’t seem to lead to being thrown out of the NFL, and Elliott’s stock may wind up being just fine, but even that discussion and some reported negative comments about him from coaches and GMs (anonymously, of course) indicates that at least some teams are concerned with what players say.

With all that to consider, it’s no wonder that so many players wind up choosing the safe, clichéd and boring route. Some even go further and try to avoid the media altogether, the way Marshawn Lynch has. Media can complain about that all they like, but the decisions by certain media members to jump all over anyone who says anything remotely controversial is what’s created this problem. If we want interesting responses from athletes, we should celebrate it when they provide them, not criticize them for it.