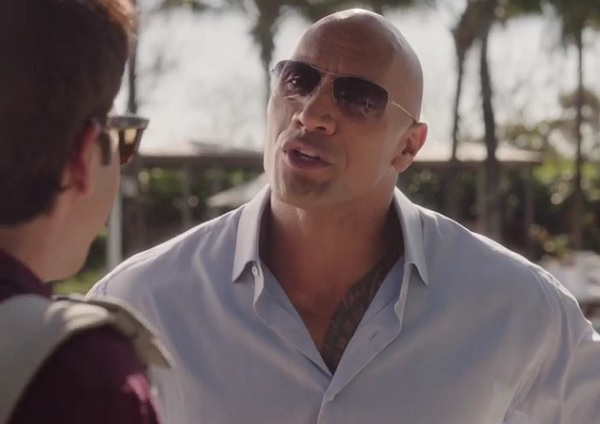 What if HBO was to tell you that it had a new series which appears to be a mash-up of Entourage and Any Given Sunday? Oh, and it features one of the biggest action stars on the planet. Is that something you might be interested in?

Back in February, HBO provided the most teasing of teases for Ballers, including a one-second clip of its new show starring Dwayne Johnson, in a promotional clip of the network’s upcoming programming for 2015. Obviously, that didn’t provide much much to go on visually, but reports indicated the series would follow a group of retired and current pro football players, headlined by Johnson.

HBO has much more of the show to promote now — one-and-a-half minutes, in fact. Here is the first full official trailer for Ballers.

Johnson plays Spencer Strassmore, one of the retired former ballers who now works as a financial manager for a current crop of gridiron stars. But as you can see from the trailer, he’s not just sitting in an office, going to meetings and spending his evenings with his family. Strassmore is living the high-rolling, jet-set lifestyle of professional athletes — and all the mad parties that come with it — vicariously through his clients.

It probably shouldn’t be a surprise that Ballers is reminiscent of Entourage, as the executive producers from that show — Mark Wahlberg and his manager/producing partner Steve Levinson — have the same role with this series. Johnson is also an executive producer, along with showrunner Evan Reilly and Peter Berg (Friday Night Lights), who directed the pilot and can be seen in the trailer.

Ballers will premiere on HBO June 21 at 10 p.m. ET, in the advantageous time slot following season two of True Detective.