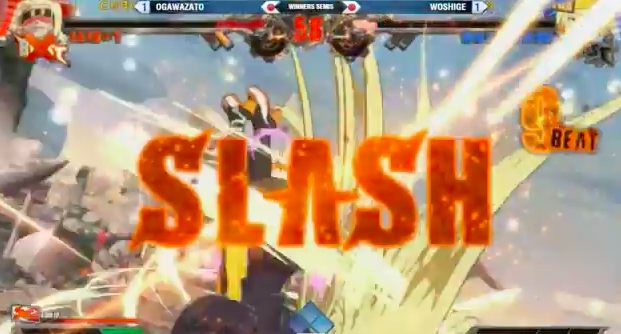 For a good number of years in the sports blog arena, any time an announcer at any level got excitable or started freaking out about something that happened, we traditionally write that they were doing their best Gus Johnson impression.

Well, now in 2015, we might have to adjust that comparison.  Because these video game announcers make Gus Johnson sound like Ben Stein.

I take you to EVO 2015, a tournament of the best combat gamers, and the Guilty Gear Xrd division.  Here we find the match between Ogawa and Woshige.  Watch what happens when Woshige celebrates too soon, but more importantly, listen to the announcers’ reaction as Ogawa comes back to win.

Ogawa would go on to win the tournament while Woshige finished in third.  Robert Flores and Jay Harris showcased the above clip on SportsCenter last night and their reactions are equally as wonderful:

A few of my favorite things about this video:

1) I’d love for “FULL METER… FULL METER” to become somebody’s patented home run call.
2) The excited yelling from the analyst (or at least, the person I assume to be the analyst) makes me think it might actually be Bengals radio announcer Dave Lapham.
3) The announcers yelling “WHY WHY WHY” and “WHAT ARE YOU STANDING UP FOR?” is actually a really great call in the moment.  Now I can only imagine that soundbyte being played over Bill Buckner and other great reversals of fortune in sports history.
4) The actual title of the video is “Woshige busts his nut early.”

You tell me how eSports doesn’t become the next big thing in sports after watching this.