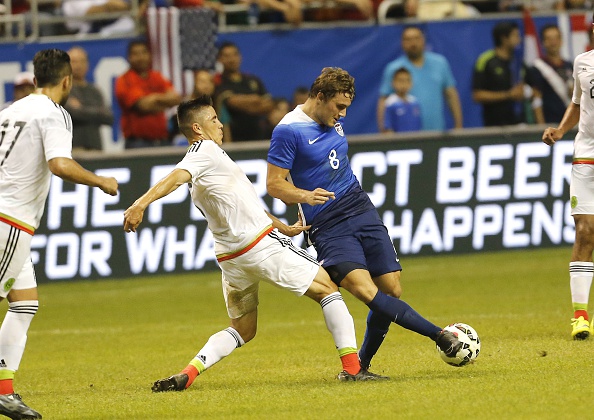 For a friendly match, Fox Sports 1 dedicated an extraordinary amount of time and resources to covering the USA-Mexico game from San Antonio.  The network sent their entire studio crew of Rob Stone, Eric Wynalda, Stuart Holden, and Gonzalo Pineda to the Alamo Dome.  There was a set outside the stadium for pre and postgame coverage to capture the atmosphere of the fans and the rivalry.  The network employed a sideline reporter with each team for the match (Julie Stewart-Binks and Francisco Rivera) in addition to John Strong and Alexi Lalas in the booth.

On top of the number of people covering the match was the time allotted.  A full hour of pregame coverage and sustained postgame coverage as a part of Fox Sports Live bracketed the 90 minutes.  (Fox Sports 1 has learned from ESPN’s Monday Night Football coverage by having a de facto postgame show within their flagship highlights show as a way to boost the lead-in audience for Fox Sports Live.)

Solely taking those factors into account, the evening was a big success for Fox Sports and their soccer coverage.  This was not Michael Strahan presenting “football vs futbol.”  This was not the gimmicks of the glow puck.  This was not thousands of marching band shots.  This was serious coverage that brought a big-time feel to a sporting event.  Fox Sports did something very important last night for building their relationship with American soccer fans after the Gus Johnson experiment – they treated USA-Mexico like it was a big friggin’ deal, even if it was a friendly.

With Fox trying to install Johnson as lead commentator, there was a bit of a message that “we need to do something different to soccer to make it better and more mainstream.”  In Fox’s quest to “Americanize” the sport, they overlooked plenty of worthy announcers who already fit that bill to try to craft something of their own making.  Although Gus has his cult following and is beloved by a lot of sports fans, isn’t that what ESPN tried to do so long ago with Dave O’Brien?  It didn’t work then and it didn’t work now.

Now with Fox moving forward, it seems as if the network realized that they could accomplish what they wanted with people who were already working in soccer and more than qualified for the job.  Ever since being installed as their full-time lead soccer announcer, John Strong has been impressive.  And at just 29 years of age, it appears he has an enormous future ahead of him.  I was particularly fond of his second goal call that showed a bit of flair for the dramatic while capturing the Dos a Cero scoreline:

Strong might not have been Fox’s first choice, but he’s slowly proving to be the right choice.  Along with J.P. Dellacamera, the network should have two American soccer play by play men they can be quite content with heading towards the Women’s World Cup.  (Phil Schoen also deserves to be in that discussion of American voices with his excellent work over at beIn Sport.)

Naturally, it wasn’t a perfect 10 on the night from Fox Sports and there’s still plenty of strides to be taken.  Some of the production aspects weren’t as clean or as detailed as other networks (camera angles, standing on the field at halftime, etc.)  Alexi Lalas seems to be a much better fit in the studio than the broadcast booth, where he sounded rather moribund all evening.  Lalas is a provocateur.  He’s much better playing off someone.  Asking him to be a solo analyst in the broadcast booth doesn’t accentuate his skill set.  As far as the studio goes, the jury is definitely still out on Stuart Holden and soccer fans are likely already entrenched in their camps with how they feel about Eric Wynalda.  As a host, Rob Stone isn’t Bob Ley or Rebecca Lowe, and that’s just fine for Fox.  His energy in that position can be a distinguishing factor for the network’s coverage.

And really, that energy and time dedicated to soccer is all we can ask of Fox Sports 1 at this point.  The network isn’t going to be as beloved as ESPN’s World Cup coverage or as respected as NBC’s Premier League coverage, at least not yet.  But what they can bring to the table to serve soccer fans is tons of coverage and selling it like it’s the most important thing in the sports world happening at that moment.  And that attitude and love for the game is going to go a long way in starting to win fans over.