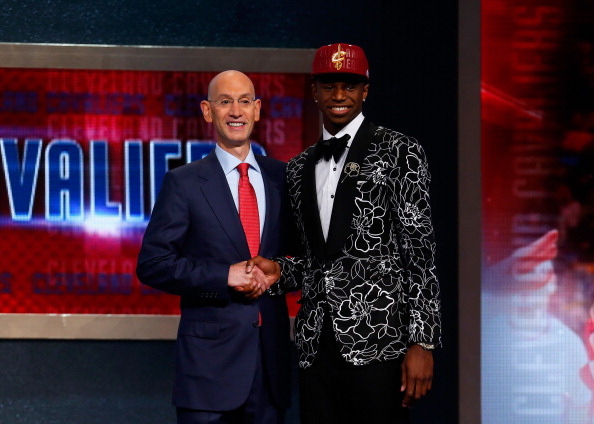 Every year surrounding the NFL Draft there is much furor over reporters jumping ahead of the televised proceedings and spoiling or “tipping” picks on social media.  Nowhere does the “news” and “entertainment” aspects of sports conflict quite like the draft.  While the networks want to preserve the entertainment element and suspense of the event, only revealing picks when the commissioner announces the name at the podium, there are reporters who want to make a name for themselves and do what they’re paid to do – break news and get the story first.

This year at the NFL Draft, the league took it to the extreme of instructing all broadcast partners (even Jason La Canfora at CBS) to refrain from tweeting about picks before they aired on television.

ESPN and the NBA Draft will be taking a much different approach tonight.  While nobody will be tipping picks on the air, Bristol’s armada of NBA reporters will be given free reign to break news and tip picks on social media.

Via Richard Deitsch at Sports Illustrated:

The NBA draft, of course, has no such television competition. ESPN will exclusively air the NBA draft tonight at 7 p.m. ET, the 13th consecutive year the network has hosted the event.  But ESPN has a different approach to the draft regarding the social media use of its talent. The on-air talent who are part of the telecast—host Rece Davis, analysts Jay Bilas, Jalen Rose, Jay Williams, front office analyst Tom Penn, international expert Fran Fraschilla, and reporters Heather Cox, Andy Katz and Jeff Goodman and Shannon Spake—will not be tweeting out selections prior to the announcement from the podium. That edict does not apply to all other ESPN NBA reporters, according to a network spokesperson. On the subject of the main set broadcasters not tweeting, ESPN coordinating producer Jay Levy said, “We’re committed to providing the best live experience possible for our viewers. We don’t want to spoil the suspense of the event.”

Why the two different schools of thought between the NFL and the NBA Drafts?  Well, there seems to be a few logical reasons for this.  First, the NBA doesn’t strike me as having the same obsessive compulsiveness of the NFL in needing to control every single detail of minutiae relating to their product.  Second, there isn’t the same attitude among the fanbase towards the draft.  The NFL Draft has become a cultural event, even more important for some fans than the games themselves (just ask anyone in Cleveland or Jacksonville).  While still important, the NBA Draft just doesn’t have the same magnitude for so many fanbases and amongst more casual fans.  At most, there may only be a few franchise-changing players available in a given year and a few players who were big names in college.  The average NBA fan isn’t likely to go berserk over someone tipping the name of the next foreign player the Spurs are going to stash away in Europe for the next few years.

And finally, there’s the competition element.  The NFL has a lot of broadcast partners they can influence power and authority over.  They also have two networks simulcasting draft coverage.  For the NBA, it’s only ESPN and Turner with Bristol the sole broadcast outlet for the draft.  With so many media reporters and outlets tipping NBA picks already, led by Yahoo’s Adrian Wojnarowski, it doesn’t make much sense for ESPN to be the only company sitting on the sidelines.

Truthfully, this seems to be the best and most reasonable scenario for any draft coverage.  Let the television producers present the event as desired preserving the entertainment value and let the reporters break the news away from the television cameras on social media.  This way everyone gets to do the job their payed to do and nobody has to forcibly be silenced.  In this scenario, fans can have the choice of whether or not they want to engage in the news and pick tipping or log off Twitter and enjoy a spoiler-free draft.