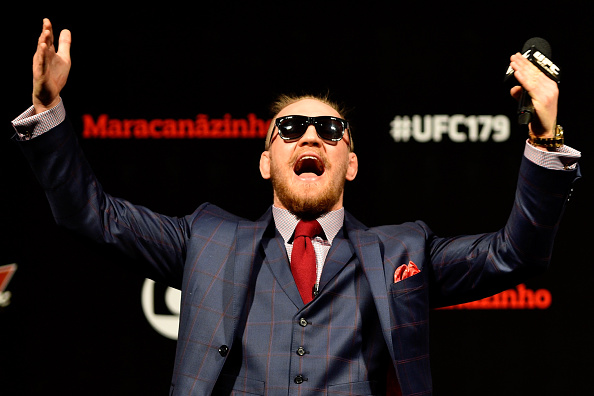 The UFC’s Fight Night event on Sunday night from Boston was a huge risk for the company. The show would be going head to head with the end of the AFC Championship Game (being held down the road in Foxboro), and there wasn’t much starpower on this card. Well, there wasn’t much starpower aside from a hastily booked rematch between Donald Cerrone and former lightweight champion Ben Henderson and budding Irish star Conor McGregor’s heavily-hyped fight with German kickboxer Dennis Siver. But the UFC delivered a monster rating for Fox Sports 1 – they drew a 1.7 overnight, the highest overnight for a UFC card on Fox Sports 1 in the nearly year and a half history of the network.

Needless to say, this is a huge win for both the UFC and Fox. Each party heavily promoted McGregor leading into the fight, with promos advertising the fight airing during Sunday’s wild NFC Championship Game, McGregor hosting a movie marathon on FX, a special “Embedded” series hyping the fight, and even a run up to Bristol for a turn through ESPN’s car wash for McGregor. If this show failed to deliver, the UFC would need to go back to the drawing board to find a marketable star in the featherweight division.

But thankfully, they won’t need to – and McGregor did an amazing job himself at hyping up a fight with reigning, untouched champion Jose Aldo after disposing of Siver. McGregor rushed into the crowd following his victory and confronted Aldo, who did his part by… laughing at McGregor due to his antics. Suddenly, hype in the featherweight division was at an all-time high, and the Aldo-McGregor fight is possibly the most anticipated fight on the docket in the UFC past the Anderson Silva-Nick Diaz fight at the end of the month.

I’d also like to make note of the Sunday night timeslot for this fight, a period typically reserved for Sunday Night Baseball, Sunday Night Football, The Walking Dead, awards show, and awesome HBO dramas. The UFC and Fox Sports 1 could thrive on Sunday nights, turning it into “fight night” instead of its typical Saturday night slot against college football, college basketball, the NBA, the NHL, and the whole “social life” thing. Over the next seven months, the only live sports the UFC will have to contend with on Sunday nights (excluding the Super Bowl, of course) is live baseball on ESPN and the occasional college basketball game. The UFC could really claim the night and give Fox Sports 1 a legitimate product on Sundays.

The success of Sunday night’s card has opened up plenty of possibilities for the UFC and Fox Sports 1. A star was born, much like when Jon Jones viciously beat both Brandon Vera and Vlaidmir Matyushenko on Versus in 2010. Seven months after the Matyushenko fight, he was main eventing a pay-per-view against Shogun Rua in a fight that would earn him the light heavyweight title. McGregor may not have the same sort of success vs Aldo that Jones did against Rua, but he’s definitely arrived.

His emergence almost reminds me of that of Chael Sonnen. Sonnen talked his way into a title shot against Anderson Silva, and nearly pulled off the upset of the century before getting submitted in the fifth round. The rest of his career was marked by PED suspensions and more unwarranted top of the card fights, but Sonnen helped himself become a household name with his mouth. McGregor is doing the same, and win or lose, he’s got time on his side (which Sonnen didn’t). Fans might not agree with the way McGregor has moved himself into a position for a title shot, but one thing is for sure – people are way more hyped to see McGregor fight Aldo than they would be to see Frankie Edgar, Chad Mendes, or Ricardo Lamas fight Aldo. Money talks, and McGregor made himself and the UFC some serious change over the past week or so.