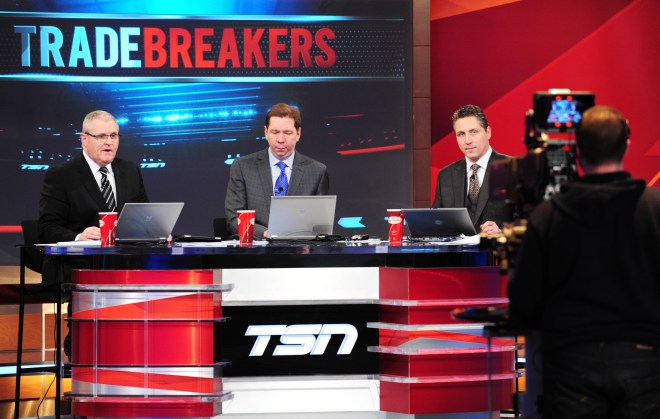 When Rogers outbid TSN for a 12-year national NHL rights package back in December 2013, it was described as “a massive blow” to TSN, and one that seemed likely to dramatically alter the Canadian media landscape, turning Rogers Sportsnet into the behemoth and TSN into the scrappy underdog. Even those of us who were optimistic about TSN’s NHL-less future thought they’d still take at least a partial step back. It hasn’t played out that way, though, and the latest ratings news is just another indication on that front. Despite no longer having rights to air NHL games nationally, January saw TSN post its highest-viewed month (in terms of average audience) in five years, and the second-highest viewed month ever in the network’s 30-year history (behind only February 2010, when they had tons of content from the Vancouver Olympics). How did TSN pull this off without their once-most-coveted rights, and what does it mean for the sports media landscape in Canada and the U.S.? Here are five key takeaways from the news.

1. Networks can build an event under the right circumstances: The value of gaining rights to broadcast already-popular sports live is easily apparent, and it’s helped American networks such as NBCSN (hockey in particular) and Fox Sports One (college football and the MLB postseason in particular) draw substantially more viewers than normal. The corollary is easier to forget, though; if the conditions are right, a network can make compelling TV out of something that wasn’t previously popular. TSN has done just this over the last couple of decades with their wall-to-wall coverage of the annual IIHF World U20 Championships (commonly known as the World Juniors), and this event was key to their record-setting January, with TSN and RDS (their French-language channel) combining for 7.1 million viewers (approximately one-fifth of the Canadian population) for the gold-medal game (a Canadian cable record) and Team Canada’s seven games averaging 3.1 million viewers. Not bad for a hockey tournament of under-20 players that was barely even televised a few decades back. Sean Fitz-Gerald had an excellent National Post feature on TSN’s involvement with the World Juniors this December, including this critical quote:

“I don’t know if there’s anything that identifies TSN to Canadians more than the world juniors,” said Mark Milliere, TSN’s senior vice-president of production. “They are linked. And because it is young men playing with a flag on their chests over the holidays, when people have time on their hands … it becomes family moments, shared experiences.”

Fitz-Gerald’s piece explores how this event went from little-known to mammoth media property in detail, but the key thread is that TSN was desperate for content when they got the rights in 1990, and they weren’t supposed to compete for existing sports properties. They managed to get the World Juniors away from the CBC, though, and went on to build it into a programming centrepiece. We’ve seen this executed successfully stateside, too, with ESPN-created events such as the X Games and the ESPYs. It’s a bold gamble, and it certainly doesn’t always work, but the time and effort they’ve put into building the World Juniors is arguably the key part of why TSN did better than ever this January without the NHL.

2. Don’t presume audiences are monolithic: The easy line about Canadian sports audiences is that they’re there for hockey and nothing else, which is why so many saw the NHL shift to Rogers as landscape-changing. However, there are significant audiences for lots of other sports, and that’s been illustrated by how TSN’s still doing well. Their CFL rights are still very valuable (even though those audiences fell off a bit this year, they’re still huge compared to most Canadian sports properties), and January saw the network find success with a wide variety of properties beyond the World Juniors, including the Pinty’s All-Star Curling Game (another made-for-TSN event), plus broadcasts of tennis’ Australian Open, the NFL playoffs and the inaugural NCAA college football playoffs. Yes, hockey’s big in Canada, but other sports have their followings too; ignore them at your peril.

3. There may be rising Canadian interest in NCAA sports: American college football and basketball haven’t always been a big deal in Canada, and as fans of those sports will attest, it can frequently be challenging to find a particular game. However, the numbers TSN pulled in for the college football playoff (564,000 across all three games, 698,000 for the Rose Bowl, a network record for an NCAA game) are impressive, and they suggest that may be changing. There may be a few factors involved here; TSN’s expansion to regional networks (and their loss of NHL rights) helped to make more NCAA regular-season games available, perhaps building interest over the course of the year, and the hype around the NCAA’s first-ever Division I FBS playoff certainly helped. Increased awareness of the role the NCAA plays in developing CFL talent may have helped too; keep in mind that regular-season CFL games averaged 660,000 viewers this year, so that’s a sizeable fanbase. There are also more Canadians starring in the NCAA in football and especially in basketball, which also helps; expect strong numbers when March Madness rolls around. Of course, this increased interest in NCAA sports isn’t necessarily seen as positive by all Canadians, especially when CIS football and basketball games struggle to gain TV coverage.

4. Live rights aren’t everything: TSN affirmed that they wouldn’t stop covering hockey when they lost the national NHL rights, and their strategic moves to lock up top hockey reporters and personalities like Bob McKenzie, Darren Dreger and James Duthie have helped to keep them an influential part of the NHL conversation (in Canada and beyond). Moreover, Sportsnet’s decision to “talk less about the business of the game, and more about great stars and great storytelling” has left an opportunity for TSN to fill on the hard-hitting side, and they’ve generally done that well. They’ve maintained their ability to cover hockey (and other sports) despite not having the NHL rights, and that’s likely part of what’s kept plenty of fans tuning into SportsCentre and their various analysis programs, sometimes even switching after watching a live game on another network. Prime-time SportsCentre drew 201,000 viewers on average in January, up 59 per cent from January 2014. Meanwhile, Sportsnet’s NHL ratings have been less than stellar so far, so much so that they’re complaining about ratings methodology.

5. Knocking off a titan isn’t easy: This is perhaps the vital lesson for American networks watching here, and it’s one we’ve seen play out south of the border too. Fox Sports One’s stated claims of being an “ESPN alternative” have been muted lately given the disparity in their ratings, and while NBC and CBS have their own cable networks, neither’s taking as much of a run at the Worldwide Leader. That’s probably smart, as the Canadian situation shows that even getting some prime rights doesn’t necessarily put you on top. We could see a repeat of this in the U.S., especially with the news that Fox has been granted World Cup rights through 2026. Yes, those rights will undoubtedly help them, just as the NHL rights helped Sportsnet. Betting on the World Cup alone to make Fox more prominent than ESPN would be silly, though. As TSN’s January shows, sometimes you can have a great month even without one of the country’s most valuable properties.