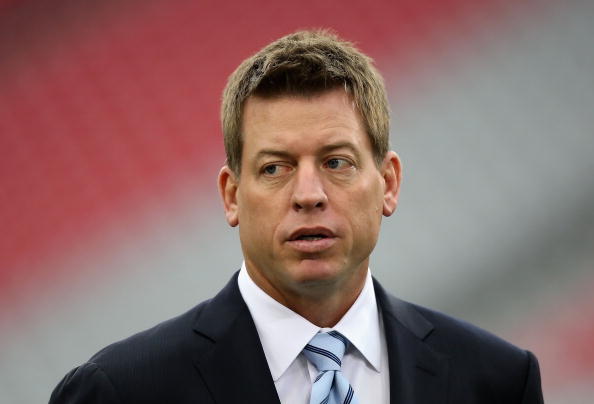 It’s almost impossible to believe, but Troy Aikman has been a part of the top NFL on Fox broadcast team for 13 seasons.  13 seasons!  The former Super Bowl winning quarterback with the Cowboys only spent one season working for Fox before being vaulted to its “A Team” – first with Joe Buck wand Cris Collinsworth, and for the last several years, with Buck alone.  Perhaps it’s so impossible to believe because Aikman hasn’t been a big personality as a top analyst like John Madden was.  He doesn’t have the idiosyncrasies of Jon Gruden or the constant speculation over his job future.  And he doesn’t draw a portion of the criticism that Phil Simms does on CBS.

Aikman more or less goes about his job producing perhaps the least amount of headlines as any other top network analyst does.  For the most part, that’s a good thing.  Aikman has grown into a very solid lead analyst.

So in reading a lengthy Q&A with Aikman at Sports Illustrated with Richard Deitsch, there are definitely some highlights worth paying extra attention to.  For starters, his contract is up this year at Fox but he says terms have been agreed to on a new contract to keep him at the network.  Interestingly enough, Aikman also says things finally clicked for him in the television booth last season after a decade in the industry.  But perhaps the most noteworthy element is how he almost walked away after Super Bowl XLII, the famous contest between the Giants and the Patriots.  After calling such a great game, Aikman says he was depressed because he wasn’t out on the field and he didn’t take any satisfaction in covering the game as a broadcaster:

How much do you currently enjoy broadcasting?

I’ll tell you a story: We did the Giants-Patriots Super Bowl in Arizona in 2008. It was a great finish, an unbelievable game. The Patriots trying to go for the undefeated season, the Giants upsetting them. I was staying at a different hotel from the rest of the Fox people and when the game ended I went back to the hotel. I was married at the time and my wife said, “Are we going to go to the [Fox] party?” I said, “No, let’s just go downstairs and grab some dinner.”

I was a little down, to be honest, a little depressed. So we are sitting there having dinner, relaxing, and [ESPN’s] Ron Jaworski comes over. He was eating at the other side of the restaurant. So he says, “Hey, man, what a great game! How about that catch from [David] Tyree!” He’s all excited. I was like, “Yeah, it was good.” He is going on and on and then finally says, “What’s wrong?” I said, “Nothing is wrong.” He said, “Why aren’t you excited? You just called this great game.” I said, “Ron, I didn’t do anything. I’ve played in that game. I won that game. I know what that feels like. All I did was talk about it. I didn’t do anything.” And he walked away and when he did, he gave me this quizzical look. It was like, “What is wrong with this guy?”

So he walks away and I said to my wife: “You know, this may be the greatest game that I ever call. I may have just called the biggest game that I will ever have the opportunity to call in this profession and I could not be more depressed right now.” It shook me up a bit. I thought, “Man, where does the joy come from broadcasting when you have already been the one out there doing it.”

But I will tell you since that time I have not experienced that low again. We did the Super Bowl last year in New York and I could not have felt a greater accomplishment in this business. I don’t know why I am all of sudden getting real satisfaction out of this job, but I am and that has really helped me. The preparation is extensive and I put a lot of time into it, but I enjoy it. As a former player I have a real appreciation for a guy like Aaron Rodgers and how much time he puts into his craft and how good he is doing it. I enjoy the relationships I have with coaches and players. I enjoy the process of getting ready each week. I enjoy my crew. I like the weekends and being at the site of the games, and we get to do great games.

I am so fortunate to have had a career like I had playing — I lived my dream playing in the league — and now to do a job where I get to be around the sport is beyond imagination. The only negative for me is I have my girls [he has two daughters, 12 and 13] and I am gone for six months out of the year. I miss a lot of their activities. I do get to see a lot of them during the week that a lot of dads don’t get to see and then I have six months where I am always there. But being gone on the weekends and missing some important moments in their life is really the only negative.

How did this professional fog lift? And how long did it exist?

You know, I don’t really have a great answer. I never felt it again. Of course it was three years until we did our next Super Bowl, which was the game in Dallas. But I didn’t feel that way after future playoff games. I have not experienced that feeling again and I’m not sure exactly why. I don’t want to say everything was fine the next season, but when we did our next really big game, I didn’t experience it. So because of that, I really have been able to enjoy the profession.

“At the time this was happening, I’ll admit I was thinking everyone wants to take pride in what they do and feel satisfaction and I was thinking, Do I need to go into coaching or something else to experience the highs and lows of winning and losing? That for me is real. You love the winning when you were playing but you just miss having so much invested and then not knowing completely whether we got it done or did not get it done. That’s how I felt in 2008 but I have not felt that way since.

It’s fascinating to hear that perspective from a former professional athlete turned broadcaster.  So many times we hear about coaches and players who return to the professional sports world after a stint in television because they missed the competition element.  Other times, players and coaches are relieved to be outside of that pressure cooker, live a normal life, and never want to return.  After all, working in television allows those elite competitors an opportunity to stay around the sport and be some part of the games without the pressure of winning and losing.  But rarely do you hear a broadcaster open up about taking such a long road in finding satisfaction in a television career after his Hall of Fame playing days.

Again, it is a lengthy Q&A and there’s a lot more from Aikman on his career in broadcasting and he even opens up about Skip Bayless publishing rumors about him being gay back in the 90’s to sell a book.  (If you think Bayless was only doing terrible things for attention just since being on First Take, think again.)  The entire conversation is well worth the read at Sports Illustrated.