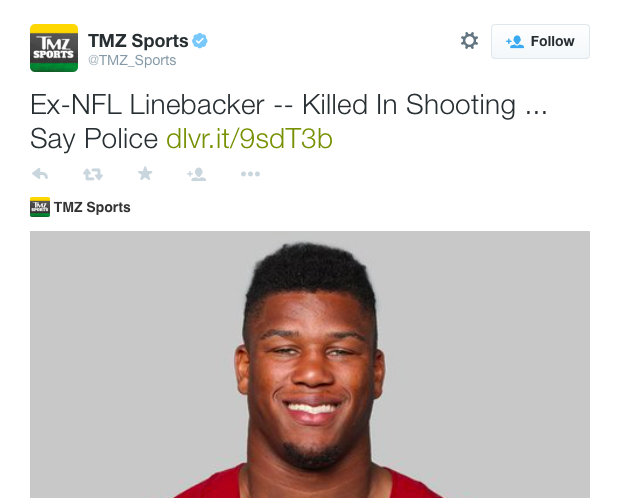 TMZ has turned themselves into a substantial player on the sports scene, and one that’s often hard to ignore. They’ve had some incredible successes, including the Ray Rice video and the Donald Sterling audio tapes. However, they’ve had plenty of big, high-profile misses as well. That happened again this weekend, when they reported that former NFL player and recent CFL signee Adrian Robinson died in a shooting in Harrisburg, Pennsylvania.

Instead, it turns out that Robinson hanged himself in Philadelphia, making TMZ wrong on the method of death, the location and the circumstances. Other outlets picked up on TMZ’s erroneous report, spreading painful misinformation far and wide until it was eventually corrected. That’s far from unique for them, and Robinson’s case is further proof that media outlets should be very leery of passing along TMZ’s stories. Every organization does make mistakes, but until TMZ can be more consistently accurate and reputable, they can’t be fully trusted as a news source.

How did things go so wrong for TMZ here? Barry Petchesky has a good analysis at Deadspin, which essentially boils down to suspect sourcing and confirmation bias. TMZ heard from a source that Robinson was killed in a shooting. They heard there was a shooting in Harrisburg, his home town, and they interpreted a Harrisburg police sergeant’s response that Robinson wasn’t involved in a particular shooting to mean that he was killed in another shooting. In fairness to TMZ, the sergeant’s response was vague and could be read that way, but that doesn’t let them off the hook. Their first source obviously had his facts all wrong, and shouldn’t have been trusted as what was essentially a sole source. They should have further followed up with the sergeant to clarify exactly what he was saying, and they could have asked better questions (such as “Was Robinson’s death in your city?”). They also should have at least tried to reach out to people in Robinson’s camp. It’s notable that his agent took to Twitter to dispute the TMZ account; if they’d called the agent in the first place and told them what they were hearing, he could have told them it was wrong.

A big part of the issue here is TMZ’s general approach, though. They appear to be more concerned with being first than with being right, and that’s led to all sorts of bad high-profile mistakes from them in the past.

Consider when they jumped the gun on boxing trainer Emmanuel Steward’s death in 2012, and did so without checking with anyone from his family.

Consider last April when they were reporting on a “suspicious incident” involving NFLers in Miami, which involved posting a photo of Colin Kaepernick supposedly shopping in L.A. at a time when he was across the continent and not bothering to verify the photo’s authenticity.

Consider their Ray Rice casino footage story, which led to them contradicting themselves.

If you expand beyond the sports world, consider their false reports of the death of Miley Cyrus and the impending death of Lil’ Wayne (amongst others). This is an organization that’s often wrong, and often spectacularly wrong.

There’s a common thread that runs through many of these mistakes, and it’s bad, uncorroborated sources. There are tons of shady people in the sports and entertainment world, and TMZ appears to trust a lot of them. It’s notable that even sources with the best of intentions can be wrong at times, which is a good reason to check absolutely everything; however, TMZ appears to do next-to-no fact-checking in many of these cases. Yes, that takes time and effort, and it may not lead to as many scoops. If they want to be a source people will actually read, trust and reference, though, they simply have to do a better job of getting their facts right.

What happens if TMZ doesn’t change? Well, unless they improve substantially, media outlets would probably be smart to refrain from passing along their stories until they’re confirmed independently – especially when they involve something so serious as someone’s death.

Yes, that can lead to being slow and behind the curve, but that’s so much better than a horrible screwup like the Robinson case.

Actively passing on that misinformation can cause significant pain for the family and friends of the deceased, and it’s clear at this point that media can’t just take TMZ’s word for it. Their reports can be used as a starting point (and should be linked and referenced appropriately if they do turn out to be true), but it’s simply too risky to treat TMZ as a reputable media outlet at this point. Hopefully, that changes; the sports world can use some of TMZ’s tenacity and resources and their ability to get incriminating files (such as the Rice and Sterling tapes), and if they can match that with better journalism standards, they might play a valuable role. Right now, though, they’re very hard to trust.