Monday night, TMZ Sports debuted on FS1, bringing what the website’s founder Harvey Levin calls “a new dimension to sports coverage” to late-night TV screens. The show broadcasts at midnight ET each weeknight (with the exception of Wednesdays, when it runs at 12:30 a.m.), so if you were asleep and missed it… well, you didn’t miss much.

OK, it’s easy to turn a nose up at TMZ Sports and act like you’re above the type of content it likes to cover. Look, I like gossip as much as anyone. Without it, what would there be to read while waiting in the checkout line at the grocery store besides cooking and lifestyle magazines? (Actually, smartphones have widened those options considerably.) It gives me something to talk to my mother and sister about during brunch.

And sports gossip provides something of a bridge. You and non-sports fans can talk about Ray Rice or Lamar Odom, except that those conversations generally have nothing to do with sports. (Although you can sound like something of an expert when discussing those players’ ability as athletes.) Maybe we should call this sports-related gossip since true sports gossip is stuff like trade rumors, contract offers and draft stock. 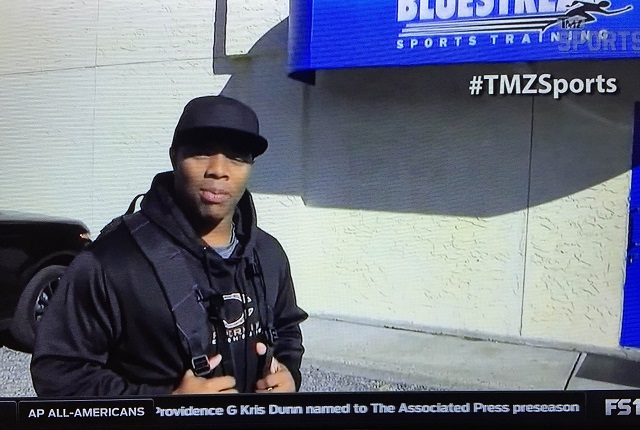 But the first episode of TMZ Sports began with what could arguably be called sports gossip, covering Rice while he worked out at an upscale Connecticut gym. (Your gym probably doesn’t have the sort of incline treadmill Rice is seen running on.) The disgraced running back is keeping in shape, hoping for a call from a NFL team and the opportunity to revive his career. What made this report notable as far as TMZ was concerned is that Rice’s wife, Janay, was with him.

From there, we got the sort of guerilla-style, celebrity-in-public conversation for which TMZ is known, as the subject is approached by someone with a camera and asked relatively casual, sometimes intrusive, questions. It doesn’t feel like an interview, at least not the sort you usually see on ESPN, a news network, or even a more formal entertainment outlet like E! or Entertainment Tonight.

While watching the interview, I couldn’t help but wonder if the correspondent identified himself as with TMZ — you know, the website that released the video of Rice hitting his wife on an elevator and made the story absolutely explosive for the NFL and the culture at large. But maybe Rice has moved on, or realized video of him acting badly wouldn’t help his comeback attempts in the least. 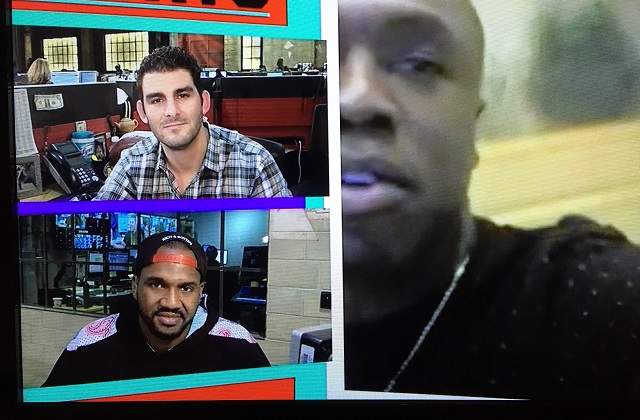 What other topics did the debut of TMZ Sports cover? Maybe Khloe Kardashian and James Harden are back together, but isn’t she back with Odom? (The segment did nothing to clarify that, but had footage of paparazzi following Kardashian and Harden in Los Angeles.) Tracy Morgan was courtside at a Knicks game and got a game ball from the team. Jerry Rice talked about how well-endowed he is on Watch What Happens Live. And Andre Berto joined the show via FaceTime or Skype to discuss how he’d beat up Jose Canseco.

But where TMZ Sports really seemed at its TMZ-iest is when the hosts (whose names I don’t know because I’m pretty sure they weren’t mentioned during the show, though Twitter handles did flash on screen) were talking about Russell Wilson and Ciara taking a trip to Cabo San Lucas, and everyone began speculating as to whether or not the two were truly remaining celibate. 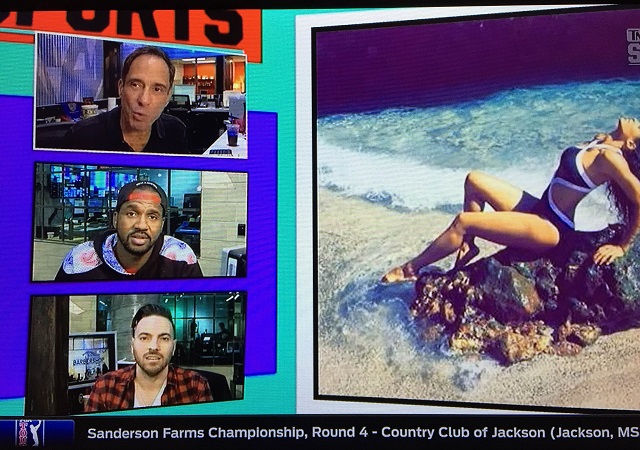 This is where Levin joined the conversation and added a layer of leering sleaze by pointing out that Wilson and Ciara stayed at a house owned by Joe Francis, the “Girls Gone Wild” founder. “That house was built on sex!” Levin exclaimed, while explaining how many mirrors were in the house and where they were located. Somewhere in there was a point and I think it’s pretty clear what it was, as everyone giddily bounced in their chairs.

There is obviously an audience for this stuff. Otherwise, TMZ Sports wouldn’t exist, let alone get picked up by FS1. With its midnight time slot, the network can almost wash its hands of it, chalking it up to a viewership that would apparently rather watch sidewalk conversations with athletes than highlights or analysis of the games being played. And occasionally, the show will probably be entertaining if that’s the sort of thing you enjoy.

I just wish the screen — filled with three or four smaller screens of the hosts and the topic being covered, along with bright colors and loud graphics — didn’t hurt my eyes so much. It’s an assault on the senses, especially at midnight. And you might feel like you need a shower after watching. But I’m obviously not the target audience, and I’m going to presume that most of the people reading this isn’t in the ideal viewership either. For those who are, however, you know what you’re getting with a show called TMZ Sports and everyone involved is happy to provide it.