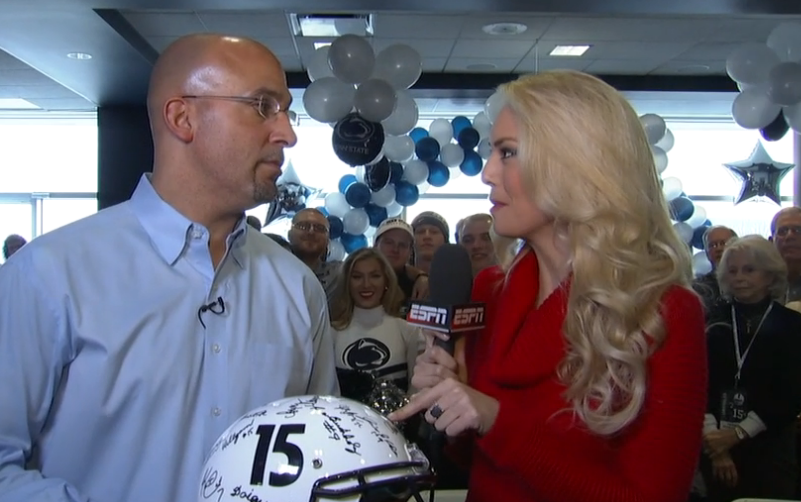 I know, I know, I know… we’ve just about reached the saturation point on posts about Britt McHenry.  But the most important surveillance footage of a person berating a tow company clerk to ever be recorded still has a little bit of life left in the news cycle.

Now the attention is turning to McHenry’s one week suspension and her future at ESPN.  Judging by the feedback we’ve received at AA, many of you feel McHenry was very fortunate to be sat down for only a week given the nature of the footage and her behavior.  You can bet Bill Simmons fired off a 50 paragraph e-mail to someone in management wondering why his last suspension was 3 times as long.

Now TMZ reports that there are several folks inside ESPN (both in front of and behind the cameras) that want to see McHenry’s career get towed out of Bristol.

A few of the anonymous quotes to make their way to TMZ:

Another person told us, “[What she did] reflects on all of us at ESPN. She will be fired soon. If not, I’ll be shocked.”

“She came off more than rude in that clip. It seems like she needs some humble pie,” says another ESPN staffer … “[ESPN] can find a million Britt McHenrys to replace her.”

Of course, what we don’t know here is just what percentage of people inside ESPN feel that McHenry should get the boot and how many responded to TMZ wishing to give her a second chance.  “ESPN employees feel that Britt McHenry punishment is firm but fair” doesn’t exactly scream TMZ-worthy headline now, does it?

But given just how enraged people have been since McHenry’s video was made public and how her punishment compares to the always expanding list of ESPN suspensions, it isn’t a stretch to think that there’s some internal strife over her continued presence at the network just as there’s been an external debate about it on social media.

As time goes on though, I’d reckon it’s going to be harder for ESPN to justify keeping McHenry on board at the network.  Why?  Because this isn’t just something that will go away.  This will always stick with McHenry as the public now feels like it knows the “real” Britt McHenry (as fair or unfair as that may actually be) and it ain’t pretty.

Yes she was angry, yes she was probably justified in being angry, but that’s no excuse for saying things like “Maybe if I was missing some teeth they would hire me, huh” or “I’m on television and you’re in a f—ing trailer, honey, lose some weight.”

ESPN is always uber-protective when it comes to the network’s image.  And they are also very reactive when they feel that image is under fire.  This is a Disney company for goodness sake.  And McHenry’s offense wasn’t some intra-company squabble (Simmons) or putting a trolling billboard somewhere (Le Batard), it was being nasty, arrogant, elitist, and cruel when the red light was off.  If any of those negative connotations become attached to the network with McHenry coming back, it’s hard to imagine that relationship lasting very much longer.