We told you yesterday about the new ESPN.com. Well, now that the new site has launched let’s a take a short tour. First, the design is simpler than the previous version which became clunky. In an attempt to reach out to an audience that now uses smartphones and tablets, ESPN.com makes it easier to read the site on a handheld device. Here’s how it looks on a smartphone: And here’s how it looks on your desktop/tablet: 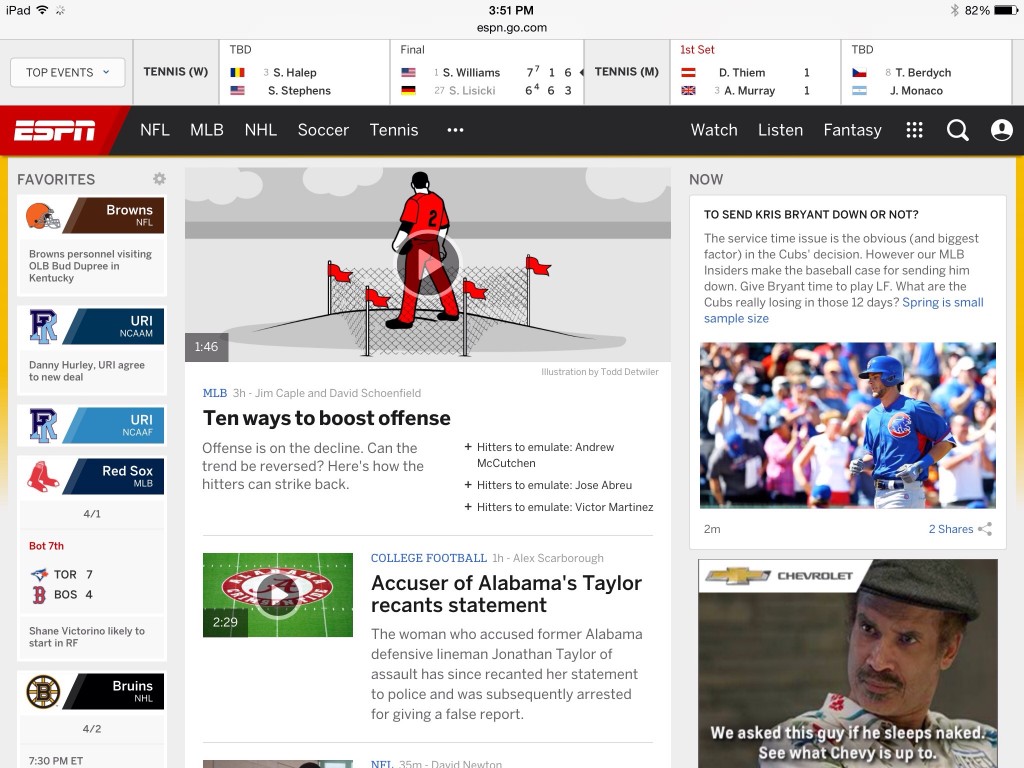 As you can see, the scoreboard on the top looks cleaner and there’s the “Favorites” section on the left to provide news and scores on your favorite teams. If you have an account with ESPN.com, this will load immediately and you can decide which order team or league you will see as you scroll down the page.

On the right, there’s the “Now” section which will be explained later. The middle section allows for more breaking stories and as newer stories develop, the older ones get pushed furather down the page.

As ESPN explains, not only was this redesign launched with the 20th anniversary of dot com in mind, but also to adapt to a time when more people are accessing the Internet through their smartphones. In a story explaining the redesign, ESPN.com says it’s all about going mobile:

Since our previous redesign, nothing has changed our habits more than the smartphone. We see it here every day: In January, we had 94 million users, and 61 percent of you accessed us only on a mobile device. That’s why our product and tech teams have spent months tinkering behind the digital curtain to make the site responsive, to create a seamless experience from your desktop to your tablet to your handset.

And the mobile site is easier to navigate and it provides links to the Grantland and FiveThirtyEight microsites under the “news” tab. And if you hit the “Now” tab, you’ll see something familiar if you access the ESPN mobile and tablet apps:

The ESPN Now section is powered by a dedicated editorial team, charged with capturing and curating a stream of up-to-the-minute sports moments and conversations as they’re happening. Content in ESPN Now includes short, snackable content including breaking news, must-see and in-game video, audio clips, social responses, insightful statistics from ESPN Stats & Info and more, all of which are easily shareable. First introduced in the ESPN App, ESPN Now provides a way to capture the immediacy of sports today, while maintaining the editorial standard required by ESPN. There’s plenty of new things at ESPN.com. It will take some time getting used to and while people generally don’t like change, this relaunch has been coming. We’ll see if visitors respond, if they’ll turn away in favor of Yahoo or other sites.