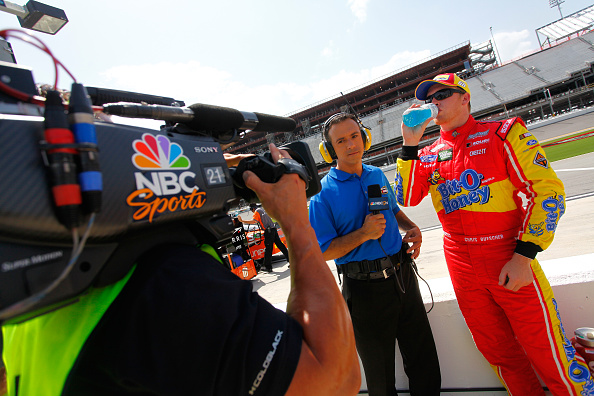 Yesterday we covered a story with quite the juxtaposition in good and bad ratings news – the 2015 Brickyard 400 was the most watched event in the history of NBCSN… but the lowest rated Brickyard race on record.  Given NBC also showed a much less prestigious Global RallyCross race at the same time on over-the-air NBC, it raised a lot of questions at the time as to why NBC would make such a peculiar programming choice.  Wouldn’t you want the more popular event on broadcast television where it would reach more viewers and the less popular event on cable?

For years, that was the general understanding for how sports on television should work.  Then the leagues and the networks saw how much money there was on cable and a gold rush took place.

When it comes to televised sports, more and more major events have moved to cable television.  It’s a long list that includes the College Football Playoff, the NBA Conference Finals, the Final Four, and many others.  We don’t even blink an eye at Monday Night Football being on cable anymore and it was a broadcast staple for decades.  Instead of putting all their major events on their broadcast networks, we’ve seen cable emerge as a priority.  Heck, ABC doesn’t even have a sports department anymore as it’s been folded into ESPN for some time now.

Here’s what we wrote back in 2011 about the broadcast to cable phenomenon (and keep in mind this is before Versus transformed into NBCSN and Fox launched FS1):

The summary is this. Premium events increase ratings. Those ratings allow the cable channels to renegotiate their carriage contracts with your cable or satellite provider as well as boost their ad sales. Network television primarily monetizes via advertising.

Every month you’re paying somewhere near $10 bucks if you have TBS, TNT, Versus, ESPN, ESPN 2, Big Ten Network, and a local sports regional network. As more events move over to those channels OR if more sports channels emerge, you’re going to see that amount go substantially up. Suddenly we may be at $15 a month for all the good sports channels which would be $180 a year and for 100 million households, you’d be looking at a total of $18 billion a year. Again that number doesn’t even take into consideration advertising revenue.

A lot of that growth potential is up for grabs and we’re seeing the networks go to war to procure sports programming rights so their respective cable channel can grab a larger share of that money.

And it’s just those carriage contracts that make the Brickyard 400 and other premier events so important to NBCSN.  While ratings might be down for the event versus its time on ESPN, the record setting ratings for NBCSN are important ammunition to try and gain more revenue through increasing subscriber fees.  And yes, it’s well worth the tradeoff in viewers, at least for the network.  It’s the same reason why NBC puts a couple Stanley Cup Final games on NBCSN each year.  To become a bigger player in the sports media world, NBC needs to put more premier live sports on NBCSN.

Why?  So NBCSN can charge more than $0.30 per subscriber per month.

The difference in NBCSN charging $0.30 cents versus, let’s say, $1.00 in subscriber fees is extraordinary.  For the sake of this exercise, let’s use these numbers from our friend Dave Warner at What You Pay For Sports rounding to say NBCSN is in 84 million homes.

That’s how much more NBCSN could make if they were able to charge $1.00 per subscriber per month for their channel.  Every year.  To put that into perspective in the megaworld of exploding sports rights fees, that’s more than what ESPN is paying for the College Football Playoff or Fox pays for its entire MLB package.  Could you imagine how much more of a destination NBCSN would be with the College Football Playoff or the World Series?

Even if NBCSN could have a modest increase in subscriber fees to say, $0.50… even that 20 cent increase, literally just two dimes per subscriber per month… it would make the network an extra $202 million every year.  That alone could have won US Open rights in golf and tennis with some change left over.

If we consider Fox Sports 1 and NBCSN the two main competitors behind Bristol for the #2 brand in cable sports, we can see that FS1 already has a massive built-in advantage by being able to raise their rates from $0.23 when the network launched in 2013 to $0.99 currently.

That massive difference in fees is why many see Fox Sports 1 as the bigger long term threat to ESPN’s throne than NBCSN.  Trying to make up a $700 million gap every year and expecting to play on a level playing field might as well be like asking a D-III college team to survive in the English Premier League.  In fact, it’s a testament to the excellent work done at NBCSN that many fans see their content as having such a high quality for sports like the EPL or NHL or NASCAR given the discrepancy in revenue.

This is why NASCAR is so big to NBCSN – if the network can get millions of new fans to turn in several weekends throughout the year, they can demand those higher fees, lest the cable and satellite companies risk a bunch of calls from angry NASCAR fans.  (For what it’s worth, this high priced game of poker is why there has been such a rise in disputes between sports networks and carriers in recent years.)

But to take this conversation to the next level… are networks like NBCSN and Fox Sports 1… and even ESPN trying to catch a train that’s already left the station?  Are they trying to maximize their cable revenues when the digital revolution is already here?

With the cord-cutting and cord-shaving phenomenon taking shape, it’s possible the broadcast networks might rebound as a live sports outlet.  And it’s possible that over-the-top and digital offerings could be further enhanced as gamechangers.  Look at everything that NBC offers through NBC Live Extra.  Instead of trying to play the game with the cable and satellite providers, what if they could go over the top for a small fee every month?  Would you pay $5 per month for every EPL game, the NHL, and Olympic events on NBC Sports Live Extra?

While that might be just a hypothetical now, if the Disney CEO is talking about offering ESPN directly to consumers you know there’s some seismic shifts on the horizon.  Maybe instead of trying to catch up in cable and satellite fees, NBCSN pivots before the other networks to maximize their digital revenues and get ahead of the curve?  Just a thought.

This is going to undoubtedly be one of the biggest stories in sports media over the next decade.  How will all of these networks react to the changing media landscape?  Will the cable bundle last?  Will we go a la carte?  Or will digital conquer all?  Every sports network will have to think creatively and think ahead to find ways to grow as we enter a new age.