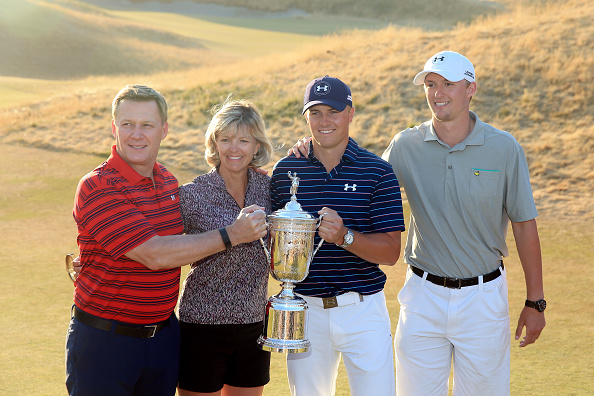 After what seemed weeks of hype, Fox’s inaugural excursion at the U.S. Open has come and gone. This being Fox Sports Group’s first time airing the nation’s golf championship, there were a lot of eyeballs viewing the event. And every time Fox didn’t make the cut or failed to meet expectations, the reactions on social media were quick, swift and cutting. Some were fair, others were not. With that in mind, it’s time for the Good, the Bad and Ugly of the U.S. Open coverage.

The last 30-45 minutes of the final round were high drama and Fox stepped up by going commercial-free and allowing the camera shots to tell the story. As Jordan Speith and Dustin Johnson were heading to an exciting finish, Fox’s announcing crew also stepped up. It was great television.

David Fay as the rules analyst gave added insight especially on shots that went awry or on rules interpretations.

Brad Faxon on his first major tournament gave some really good analysis and did well on the 17th tower.

On-course audio brought viewers closer to the golfers. Fox picked up conversations between Jordan Spieth and his caddy on the 18th hole and neither Joe Buck nor Greg Norman interrupted allowing viewers to be part of the discussion. There was some collateral damage especially when Branden Grace fired off a few “F” bombs.

The U.S. Open 360 online channel which was also available as a dedicated channel on DirecTV. This was a panel discussion mixed with highlights led by Joel Klatt with Joe Oglivie, LPGA golfer Morgan Pressel and E.A. Tischler. Bring this back next year at Oakmont.

Fox promised more technology on the U.S. Open and it partially delivered. Drones, robotic cameras, on-course audio, tower cams, blimps, virtual reality, new graphics were promised. During the four days of coverage, Fox did step up to the plate with some amazing shots of Chambers Bay and in high definition, they brought the viewer closer to the action. Since we’re in the good category, here’s what worked: 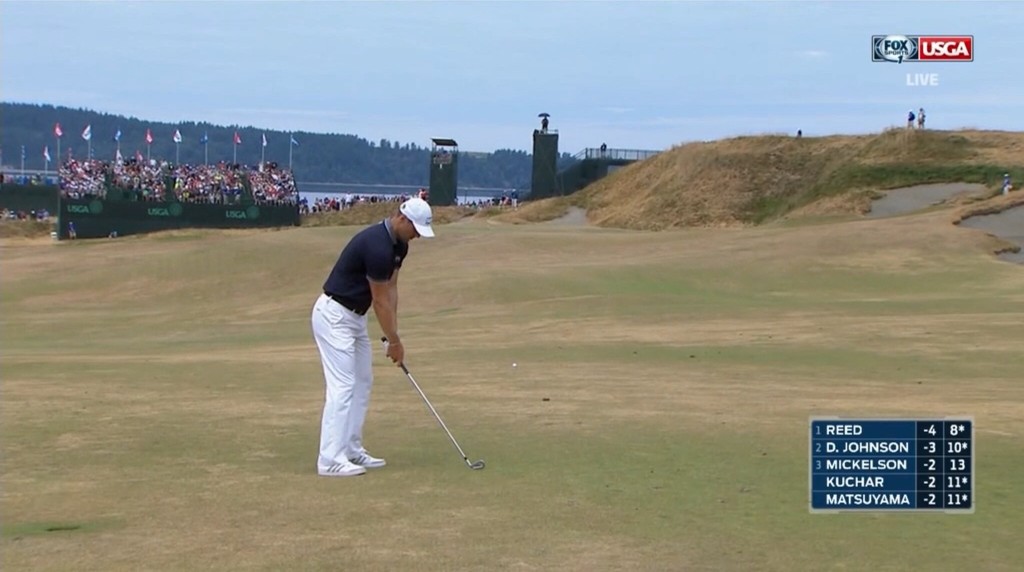 The real-time leaderboard on the lower right of the screen. Fox kept it from being intrusive and this kept viewers updated throughout the tournament. During the last half-hour of the final round, this was very useful. Expect the other golf networks to start using a real-time leaderboard soon. 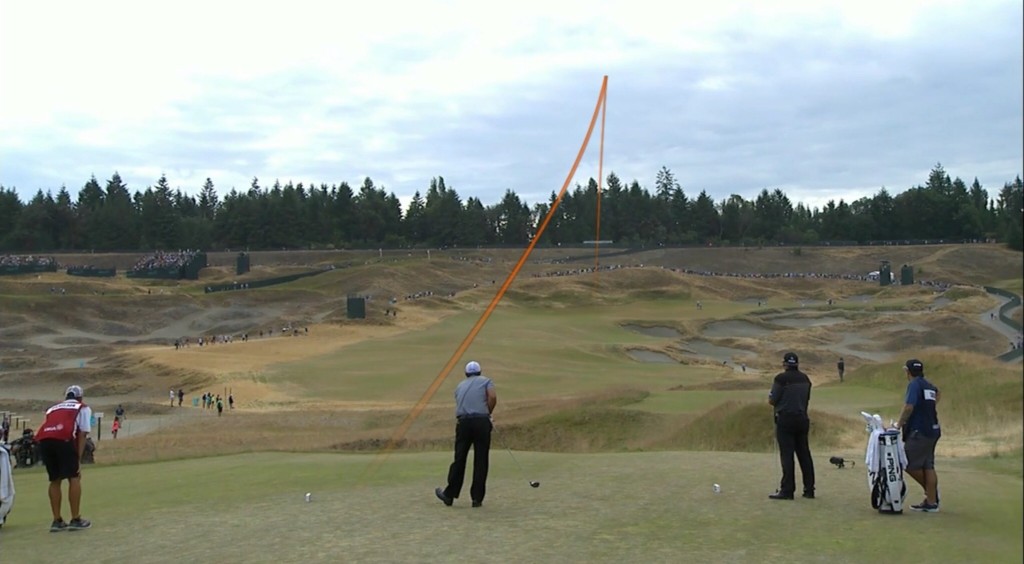 Fox Tracer shots allowed viewers to see where drives were headed, whether they were draws, fades or slices. However, Fox got over-reliant on these shots and we’ll delve more into this later.

Darkening of the greens to show the slope and the contours. This was a brilliant feature.

Drone shots of each hole gave us views that we haven’t seen. Before, it was helicopter shots, but they could only fly so low. Drones could go where the ‘copters couldn’t and the viewers were blessed with some very good views. 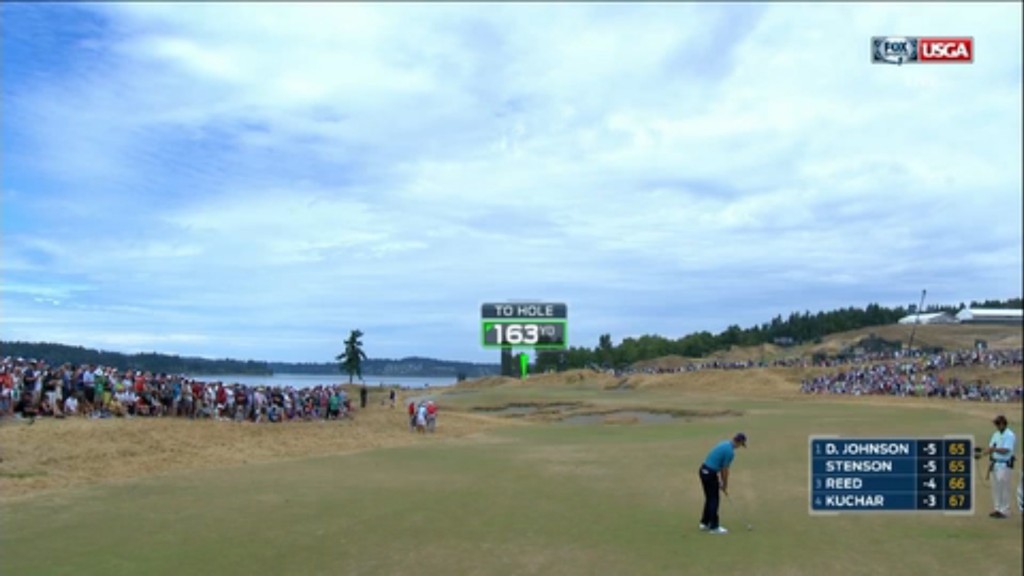 Robotic cameras which accompanied the golfers as they left the tee.

No reaction shots of Jordan Spieth during Dustin Johnson’s missed putts to win the tournament and then the tie for the playoff. This is standard in golf coverage. CBS and NBC have this down pat. Big miss by Fox not getting Spieth’s reaction as he was watching off-course. Only after Spieth was leaving the U.S. Open scoring trailer was he seen, but the money shot opportunity was gone.

It appeared that Fox was following the European model of broadcasting golf by not showing the flight of the ball on shots. Fox would attempt to show the aftermath, only to lose track and then we saw a jerky camera motion to find the ball on the fairway or green. U.S. golf viewers have become accustomed to watching the flight of the ball on tee shots, approaches and chips. Fox would not show many of the tee shots relying on the tracer. This must improve on the other USGA events.

After Holly Sonders’ interview of Billy Horschel who skewered the Chambers Bay course and the U.S. Golf Association, the Fox crew totally genuflected to the USGA. It led to a five minute discussion on how other golfers were playing well and adjusting to the course while play was happening. It was as if we were watching CBS kowtowing to Augusta National during the Masters and then some. There was no need to defend the USGA. The USGA does a good job defending itself without its TV partner getting involved.

Four men in the 18th tower when Joe Buck and Greg Norman were on break. Too many people talking at once and it was very disjointed.

Tom Weiskopf was very shaky throughout the tournament. This was surprising because he had experience working with CBS in the 1980’s and 1990’s. Unfortunately, he did not add much to Fox’s coverage. We may not see him at next year’s U.S. Open.

The entire post-round coverage on Sunday was disjointed, strange and bizarre. Curt Menefee who normally does a good job on the NFL was miscast as host of U.S. Open coverage. Perhaps it was the lack of chemistry with his analysts, but the studio portion didn’t work as well as it should have. And at the end of the broadcast, Shane O’Donoghue played the Dick Enberg role with an essay that concluded with a strange Willy Wonka reference.

Fox hired Holly Sonders from Golf Channel hoping her popularity would bring viewers to the U.S. Open. However, her interviews did not do her justice. On Morning Drive, Sonders showed she could ad-lib and think on her feet, but her interview segments did not allow viewers to see any of this. And her interview of Spieth by asking him if he had brought a fifth outfit for a playoff was quite bizarre. We can’t forget the hug of Phil Mickelson after his first round. We wouldn’t see David Feherty or Tom Rinaldi give a golfer a hug after an interview (although you never know with Feherty). Let’s hope Fox gives Holly more to do in future USGA events. Although Holly has this to say to those criticizing her interview:

And for those of u hating on my interview w/ Jordan..It's appropriate to end with a smile. He's the US Open champ! Lighten up folks 🙂

Fox failed to get an interview with Dustin Johnson after the final round. Again, this is standard on golf coverage. CBS and NBC would have been on this.

During Spieth’s interview during the trophy presentation, Fox showed someone it identified as his dad. He wasn’t. He was Jordan’s uncle.

We’ll add one more category here, one that is just short of good and above bad. 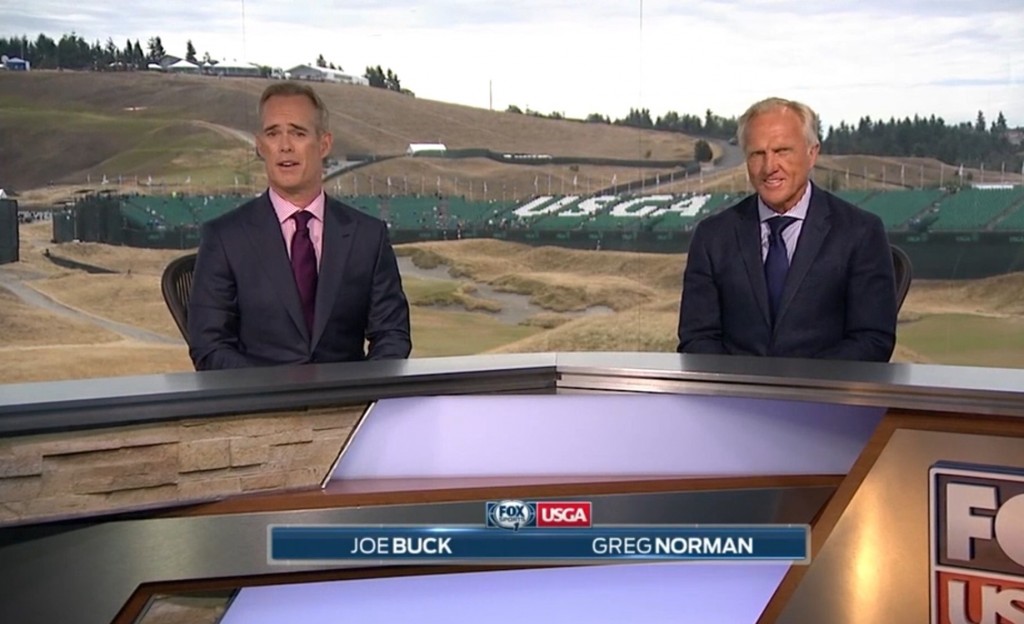 Many of you dislike Joe Buck and we get that. However, he was not the problem with Fox’s coverage. He led Greg Norman into some good points and they formed a good team by the end of the U.S. Open. Buck didn’t go into baseball or football mode which golf fans feared. He often struck the right tone. Was he Jim Nantz or Dan Hicks? No, but Buck showed he can be a decent golf broadcaster.

Fox said Greg Norman would be its version of Johnny Miller. His commentary wasn’t as cutting as Miller and he did have trouble explaining Jason Day’s vertigo condition, but he added some pretty good points during the Tiger Woods implosion during the 1st round and was on top of the action in the final round.

The Featured Group online channel focusing on one group during the morning and afternoon sessions was a good option for viewers wanting to see Phil Mickelson, Tiger Woods and then the lead groups on Saturday and Sunday. Tim Brando as the lead announcer on this channel did rely a bit too much on cliches, but overall, was a good choice.

So as we head to the Open Championship at St. Andrews next month, Fox has given us some food for thought and hopefully will work on improving their broadcast for next year’s Open and the rest of this year’s USGA events.