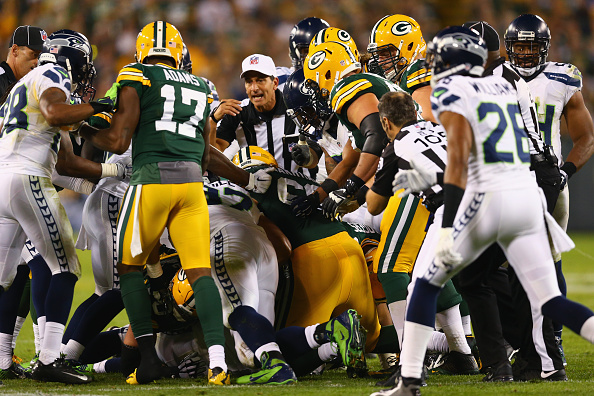 Sunday Night Football is the ratings engine that keeps on going. It’s the number one primetime series and is the great promotional machine for NBC. And asides from The Walking Dead which takes younger viewers away from SNF, primetime football for the most part burns a General William Sherman-like path of destruction on broadcast and cable competition.

That includes the Primetime Emmy Awards on Fox this past Sunday which fell to its lowest viewership ever. The numbers show that the viewership for the Emmys averaged 11.9 million and received a 7.2 rating and a 12 share. Last year’s Emmys on NBC received a viewership of 15.6 million, but it aired on a Monday night.

Compare that to SNF which received a whopping 26.4 million viewers for Seattle-Green Bay and an average rating/share of 15.1/26. And both numbers are up from last year’s Chicago-San Francisco game which had 22.3 million viewers and a 13.0/22.

NBC’s win was dominant across the board including in the coveted 18-49 demographic where the Peacock defeated its broadcast brethren by a margin of 69%. And NBC notes that this is the most-watched NFL Week 2 game in primetime dating back to 1991 when Monday Night Football was on ABC.

Locally, the top ten markets for Seattle-Green Bay shaped up this way:

Through its first three games, NBC is averaging 26.8 million viewers and that’s the best start for the broadcast networks’ NFL primetime [NBC Sports]package since 1993 when Monday Night Football averaged 28.3 million.

When you combine CBS’ viewership for the Thursday Night Football opener, the NFL is off to a very good start in primetime. Despite all of the negative stories about the league, the American viewing public shows that all that matters is the game and as long as the networks provide one, it’ll watch.