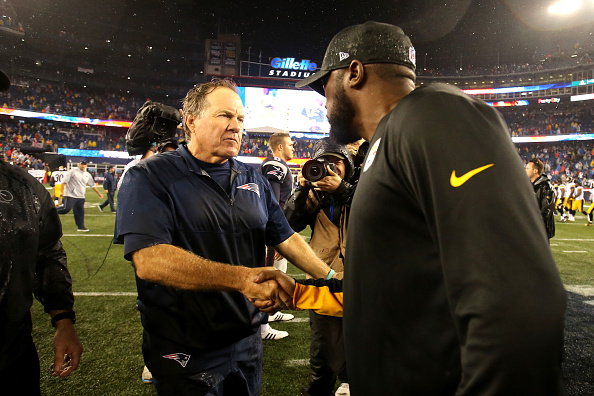 During the first half of the Thursday night NFL opener, Al Michaels told tens of millions of viewers on NBC that the Pittsburgh Steelers were having communication issues on the sidelines when coaches were picking up the New England Patriots radio broadcast in their headsets.

Not in New England! Only in the NFL!

Of all places, of all nights, there were issues with the road team’s ability to communicate in Foxboro during the season opener that created an advantage for the Patriots? There is either a completely reasonable explanation for why and how this could happen, or Bill Belichick and Bob Kraft are two of the most diabolical super-villainy masterminds in American sports history.

Or both. Can it be both?

Mike Tomlin PISSED about Steelers headsets going out. This is good. pic.twitter.com/VgYrJt0pBx

Just before that clip, Tomlin replied to a question about the team’s radios going out with “that’s always the case,” indicating that every time the Steelers travel to Foxboro, something happens with their communication system.

Tomlin told reporters, “we let the league officials on-site handle it. That’s what we did,” saying the team got satisfaction, “eventually.”

Michele Tafoya reported during the game that when situations arise where one team has communication issues, the league protocol is to cut off the communication for the other team until the problem is fixed. Who knows if the Patriots actually had similar issues the entire game or not, but shortly after the news funneled up to NBC’s booth and out to a surely record audience that included Roger Goodell, who opted not to go to Foxboro for the season opener, Tafoya reported that the problem was corrected and both teams could hear properly again.

The NFL put out a statement after the game from spokesman Michael Signora, via NFL.com, who tried to explain what happened.

“In the first quarter of tonight’s game, the Pittsburgh coaches experienced interference in their headsets caused by a stadium power infrastructure issue, which was exacerbated by the inclement weather,” Signora said. “The coaches’ communications equipment, including the headsets, is provided by the NFL for both clubs use on game day. Once the power issue was addressed, the equipment functioned properly with no additional issues.”

Well, didn’t that just go ahead and clear everything up then? (No. No it did not.)

Before dissecting the league’s, ahem, explanation of the situation, it’s worth noting that during his post game press conference Belichick said New England had issues as well, telling reporters, “it was a problem the whole game.”

This is a transcript of Belichick’s presser from Patriots.com:

Q: There were some reports in the first half of microphone malfunctions on the Steelers sideline. Did that affect you guys at all?

BB: It did, yeah. We had a lot of problems. We had to switch headphones a couple times. The communication system wasn’t very good. We deal with that it seems like weekly. Yeah, they told us they were on the verge of shutting it off, but then they I guess they got it working. I don’t know, but it was a problem the whole game. We almost had to switch helmets with Brady there at the end – couldn’t get the plays into him. It was a problem all night.

Q: Did you ever get an answer on what the problem was?

BB: No, we never get that answer. They just try to fix it, and they tell you it’s up or it’s down or whatever. I don’t know. That’s not really a very strong area for me is technology.

Belichick seemed noticeably less frustrated with the situation than Tomlin. Perhaps if Tomlin had the Steelers’ radio broadcast he wouldn’t have been as annoyed.

In all honesty—a word not use lightly when dealing with the New England Patriots and the NFL these days—how is it possible for the league to continue have any communication issues like this on the sidelines, let alone the consistent malfunctions that seem to always come up in Foxboro?

Both Tomlin and Belichick made a point to mention how consistent the issues are in New England. The league’s statement blamed, and I want to get this right, “a stadium power infrastructure issue, which was exacerbated by the inclement weather,” which either makes this the dumbest mistake ever, or the most fiendish plot in NFL history.

I’m truly not sure which is worse.

One the one hand, if New England is jamming frequencies used by their opponents and pumping in Scott Zolak’s in-game commentary into their heads, the Patriots should be pilloried for their nefarious, ear-bleeding methods, but in a way lauded for the depths they go to gain any advantage. Pile another “Gate” on a long stack of cheating conspiracies in Foxboro.

On the other hand, if the Patriots are innocent, or like the Steelers they were victims of similar communication issues themselves, the NFL has once again shown how consistently inept its infrastructure proves to be at critical times. Failing to get its communication right at OF ALL PLACES Foxboro, especially when Verizon is one of the NFL’s biggest sponsors, is not quite “blackout in the Super Bowl” but given the relationship with New England and the NFL right now, it’s close.

Perhaps this is an oversimplification, but why not give every coach a phone, a bluetooth headset and cover any roaming charges. I’m not even kidding. The NFL is a league that wouldn’t even let tablets on the sideline until they got a sponsorship deal, and still limits the communication methods between members of each staff during games. And yet…

For there to be any scenario where the Patriots radio broadcast could be picked up on the same frequency the Steelers’ headsets are set to only serves to illustrate how antiquated the league’s communication processes are on game day. That a little rain and “a stadium power infrastructure issue” could create a mess like that in a game like this is an enormous issue the NFL needs to fix immediately.

Moreover, if the Steelers could hear the Patriots’ radio broadcast, who was able to hear the Steelers’ conversations before and after the disturbance?

Could anyone in the suburbs of Boston with a ham radio and a half-decent antenna hear what Tomlin and his staff were saying to each other on Thursday night?

Given the resurgence of the SpyGate scandal this week, it would be hard to put anything past the Patriots.

Given how much the NFL relishes throwing New England under the bus, it seems just as hard to put it past the league to set up the Patriots to look even worse.

That said, a “power failure” is a great way to describe what’s happened in the NFL this off-season, so why not start the year with one too?