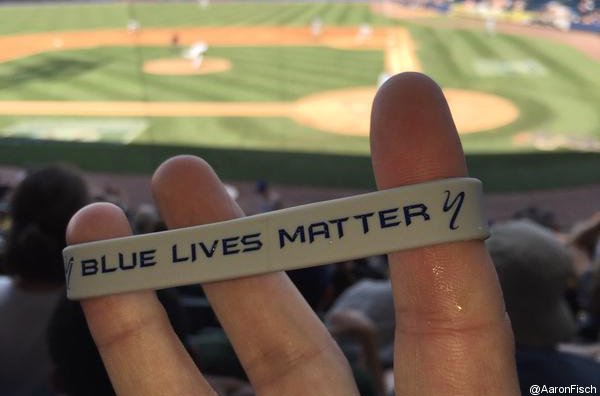 Timing can be everything, especially when it comes to promotions. The Staten Island Yankees, one of the New York Yankees’ A-ball affiliates, elected to hold a “Blue Lives Matter Night” Sunday in partnership with the eponymous non-profit organization, which seeks to “help law enforcement officers and their families during their time of need” but has taken plenty of criticism for its reference to the #BlackLivesMatter police brutality protests. That likely would have been controversial regardless of when they did it, given the ongoing national debate on that subject (and one of the most public cases there, the in-custody death of Eric Garner, happened less than a mile from the ballpark last July.) However, their timing made this worse; Sunday was the one-year anniversary of Michael Brown’s death in Ferguson, Missouri. That timing sparked additional criticism, including from a reader of TheRoot.com who e-mailed SI Yankees’ executive Michael Holley about it. Here’s the key part of that exchange:

A reader of The Root called out the organization for its clear display of insensitivity and callousness, writing the following to Staten Island Yankees executive Michael Holley:

Wow, could this promotion be any more offensive, divisive and disrespectful. On the anniversary of the death of Michael Brown, this is what the SI Yankees organization chooses to do? This is beyond poor judgement. Did it occur to anyone at the SI Yankees how alienating this is to fans who have been deeply affected by the events that spurred the “Black Lives Matter” movement, including those right here in Staten Island? … I will no longer attend games, nor will I recommend them to others until an apology and amends are made for this utterly tasteless promotion. I intend to write the NY Yankees Front Office and the Baseball Commissioner’s office to lodge a formal complaint and urge others to do the same. You should know better, and be better. This is a disgrace to the entire Yankees organization.

Below is Holley’s response, according to a statement the reader forwarded to The Root:

I am saddened to hear that you are upset with our program and this promotion, but I’m glad you took the time to send your feedback.

We at the Staten Island Yankees have been greatly affected by these issues along with everyone else in the St. George community. We all know that the protests in Manhattan and Brooklyn have stolen the headlines, but I truly believe that those that occurred here in Staten Island were the most heart-breaking – we all watched through our office windows as family and friends of Eric Garner stood in protest, notably with a lack of any sort of violence or, frankly, any sort of direction at times. To watch those take place was to feel an overwhelming sense of loss and sadness above all else. Here on Staten Island, people were sad and confused, not violent and angry. Nowhere else was it more abundantly clear that we are truly no winners in this struggle. I’ll remember those moments forever.

We put a lot of thought into whether or not to hold this promotion when Blue Lives Matter originally approached us. We try our best to accurately represent the interests of our community, and this issue is so divisive that it seemed like people wanted us to draw a line in the sand. But the more we thought about it, it came to down to this: Blue Lives Matter is an organization that supports the families of those who have been killed in action. I can’t pretend for a minute to understand who is right and who is wrong when something like that happens, but I DO know that families should NOT have to suffer. And for that reason, anyone who wants our help in raising resources to help those in need in our community will always have our ear.

It’s important for us to be a platform for support in St. George and on Staten Island in general, and I hope that everyone can look to something like this as an example of what we can do to help everyone. I would [be] thrilled, for example, if someone approached us about a fundraiser to support the fallen on all sides of any conflict.

The families of NYPD detectives Wenjian Liu and Rafael Ramos — who were shot and killed by a lone gunman in Brooklyn in December 2014 — were honored during the ball game. One of Liu’s family members threw out the ceremonial first pitch.

“It was treated just as we do with every group that comes in. It was pretty standard. We get these inquiries many times a week,” Jane Rogers, the team’s president and general manager, said in an interview with Yahoo News.

“It was really a coincidence that it fell on the anniversary date,” Rogers said. “There was never any intent to connect the days in any way. We just wanted to provide a space like any other group looking to fundraise at the ballpark.”

NYPD Sgt. Joe Imperatrice, the nonprofit’s founder and president, likened the organization to the Make-A-Wish Foundation. He said no one was aware of the date’s significance during preparation.

“We were just focused on having something positive come out of something negative,” he told Yahoo News. “We just wanted to get them out of the house and put a smile on their face.”

Their goal was to raise money for the Liu and Ramos families, who lost their main source of income, to help pay for their children’s college tuition.

“Even nine months later, it’s very hard, so we want the families to know that people care for them and are still there to support them,” Imperatrice said. “People of all nationalities were there. It was a great day.”

There’s a debate to be had as to whether the SI Yankees were right to work with such a controversial group in the first place (rather than, say, working with other police charities with less-confrontational names and goals), but regardless of one’s position there, they probably would have been smart to pick a different date. There still would have been criticism, but poor timing certainly intensified that. Maybe this case will cause minor-league executives to consider potentially-divisive fundraisers, and their timing, a little more carefully going forward. Or, you know, maybe just stick to less-controversial events like what the SI Yankees held the night before: “Game Of Thrones Night.” There, the only problem is when the wolf pees on the field…