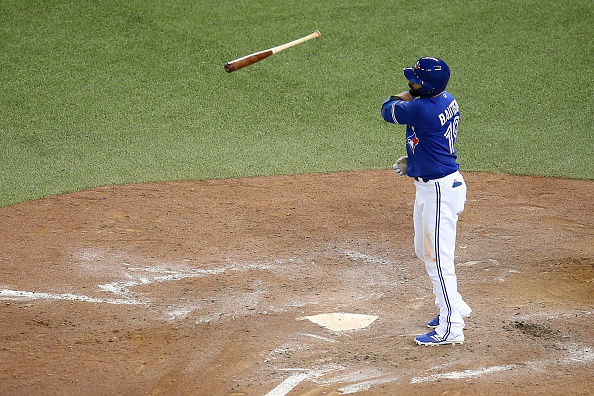 In a week where both Deadspin and SB Nation had Twitter accounts suspended over sharing highlight GIFs, Major League Baseball showed the value of being seemingly-less restrictive with GIFs and videos. Not only were GIFs and videos of Jose Bautista’s incredible bat-flip Wednesday posted to both the Toronto Blue Jays’ official Twitter account and MLB’s official Twitter and Vine accounts, plenty of others made their own GIFs and videos, which received incredible numbers of shares without being taken down (yet, at least). That’s ironic, considering that MLB has typically been one of the most aggressive leagues in seeking takedowns of GIFs and suspensions of accounts (even if they weren’t at fault in the Deadspin and SBN cases; the DMCA notices there came from the NFL, Big 12 and SEC). It’s possible that MLB could still try to remove others’ videos and GIFs, as those copyright notices can take some time, but they would be wise not to; the Bautista bat flip, and the way it was shared through unofficial as well as official channels, did an incredible amount to promote the baseball playoffs, and probably helped MLB much more in the long run than a strict insistence on keeping highlights to themselves would.

It’s somewhat understandable why leagues are trying to keep control of GIFs and videos; they see the popularity of these, and they think that they can make money off either keeping them exclusive or possibly licensing them out for a fee. However, a world where only league accounts can share highlights through GIFs and videos isn’t going to be one that ultimately benefits the leagues. Why is that? Well, highlights from fans have a couple of huge advantages over the officially-sanctioned ones.

For one, there’s what’s covered; a highlight or weird moment that stands out to fans may not be something the league or a particular team cares about. For another thing, there’s the speed. Immediacy is crucial with this content, as people want to talk about what they just saw, and fans are often quicker on the trigger than the official accounts, which can lead to their shares getting substantial attention as well.

Yes, MLB’s official Vine of the Bautista flip has received over 13 million loops (plays), but the league has a heck of a lot of people who follow it. By contrast, Paul Sporer’s unofficial Vine is nearing 3 million loops, and Ian Hunter’s GIF has almost 2,500 retweets; both were posted soon after the highlight actually happened, with Hunter’s GIF going up almost immediately compared to the one the Jays posted almost an hour later. (Again, that one has more retweets now, clocking in at over 6,100, but the Jays have 1.06 million followers compared to Hunter’s 9,061; his retweets for this are over a quarter of his total followers, while the Jays’ are closer to 1 in every 156, which shows the value of immediacy.)

The key takeaway here is that Vines and GIFs from people like Sporer and Hunter are helping baseball, not hurting it. They’re not even really competing with the official ones; those are always going to do well given the reach of baseball’s social media accounts, but at the moment, MLB isn’t particularly quick to share those. Fans want to discuss highlights right away, so these unofficial Vines and GIFs give them a way to do that before the league comes out with the official version. Beyond that, everyone has different circles, and the more people who share something like this, the better it is for a league.

A highlight like Bautista’s bat flip is incredible promotion for MLB (seriously, look at how many articles, social media discussions and the like have come out on it), and the wider it gets spread, the better. MLB, and other leagues, would be wise to view fan-shared highlights as ways to start discussion about their game and engage both those who are watching it and those who aren’t. Of course, doing their own official highlights and sharing those socially has plenty of merit too, but the two don’t necessarily have to be exclusive. This kind of sharing is beneficial for the sport, and it flies in the face of the regressive DMCA takedowns we saw earlier this week.