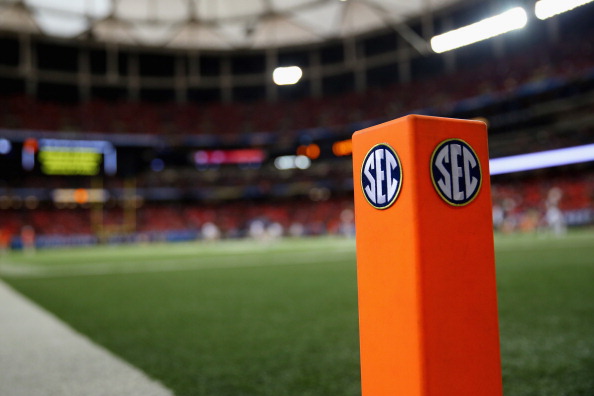 SEC Storied: Miracles On The Plains

The journey of the 2013 Auburn football team represents a story that’s fresh in the public consciousness. This slice of SEC football history is not taken from the black-and-white era of the 1950s or from the newspaper-dominated 1970s. The story of the 2013 SEC champions and their back-to-back miracle wins over Georgia and Alabama is a story any college football fan knows. Anyone who has been paying attention to big-time Division I college sports over the past few years knows that a few years ago, Auburn:

1) produced a fairytale season, aided by two of the most iconic plays in the history of college football, after failing to win an SEC game in 2012;

2) dealt with the poisoning of the revered Toomer’s Oaks — a central gathering place, geographically and spiritually, in the life in the Auburn community — by crazed Alabama fan Harvey Updyke.

The story of Auburn’s resurrection — on the football field, and in the place where a new set of Toomer’s Oaks have been planted — speaks to miracles in many places, but these miracles aren’t captured by grainy archival film footage or newspaper clippings from 30, 40 or 60 years ago. They’re remembered from flip-phone or hand-held camera images, and YouTube videos marked by rough cuts and vibrant spontaneity.

How do you tell the story of something that’s so well known and so recent? It’s a challenge, and directory Rory Karpf should be commended for the sincerity of his effort, if not the precision of his execution.

Miracles On The Plains is meant to be a little sappy. It comes with the glossy coat of the SEC Network and the full awareness that this is an in-house production, not an independent outsider’s view of a special SEC community. One of the strengths of the film, in fact, is the presence of rival coaches such as Alabama’s Nick Saban, Missouri’s Gary Pinkel, and Georgia’s Mark Richt. Their appearances on a program celebrating an Auburn triumph (or series of triumphs, to be more precise) enhance the football-specific portions of the production. There’s a little more meat on the bone, some welcome context, which magnifies the central events from an unforgettable Auburn autumn. Make no mistake, though: If this was an independent film without the SEC Network tie-in, it’s doubtful that Miracles On The Plains would have landed the coaches of other teams (at least Saban).

Acknowledging that there’s a trade-off between access to certain resources here and fluid storytelling over there (Karpf might have told a different story if he didn’t have other SEC coaches to talk to), the viewer is aware that this story is meant to be easily digested. It’s meant to portray an SEC school/team/program/community in the best possible light, but it’s going to do so with just the right mixture of poignancy and football-centric energy.

Karpf’s end product is therefore faithful to what the SEC Storied series is all about, but in the process, the telling of this story loses a measure of its narrative force.

There are two basic tension points running through this film. First, how does a family cope with the loss of a loved one who devoted so much of his life to Auburn football, and how does that family follow the Tigers through their 2013 season? Second, who is the central figure in the telling of the story?

How you answer these questions — not necessarily the answers themselves, but how well you think Karpf dealt with them — will likely shape your ultimate verdict on Miracles On The Plains as a cinematic product.

Let’s tackle the first tension point and then move to the second one.

The family that’s grafted into this story of Auburn and the 2013 football team is the Rushing family. Chris Rushing was taken into the football sports information department and mentored (at least in part) by longtime Auburn athletic director David Housel (now retired). However, he died of a heart attack on Christmas Day of 2012, coinciding with the low point in recent Auburn football history.

After a slow start to the film in the opening five or six minutes, the Rushing family puts the most human face on what it means to be an Auburn fan in a 2013 season of resurrection and new beginnings. Toomer’s Oaks and Toomer’s Corner are the places where the embodiment of Auburn’s healing process are most powerfully seen and visibly felt.

When the story of the 2013 Auburn team is told, the spoken desire on the part of Kirk Rushing — Chris’s father — to attend every Tiger game, home and away, begins to acquire a central place in the story. Yet, as the Auburn season moves along and then arrives at the season’s two most miraculous occurrences — “The Prayer At Jordan Hare” against Georgia, followed by the even more famous “Kick-Six” against Alabama — the Rushing family is relegated to the periphery. A brief sentence here or there can be found later in the film, but the inclusion of the family’s story in the film becomes less powerful over time… because the Rushings are not as frequently seen. The early segments in the film lead the viewer to believe that the Rushings are going to be the gravitational center of Miracle On The Plains. Yet, that doesn’t turn out to be the case.

This leads to the second tension point of the film: Who is the gravitational center? Housel is one prominent person in the story. So is Auburn coach Gus Malzahn, whose family is featured in a few warm (non-football) moments during the closing credits, something which suggests a measure centrality in the larger scheme of things. Auburn running back Tre Mason speaks thoughfully and candidly in the film — he emerges as one of the film’s better voices — and the Rushing family is endearingly, openly, honest.

Yet, it’s hard to get a fix on which person rises above the rest to become the film’s heartbeat. The Rushings, as mentioned above, don’t get featured enough to attain that central identity. It really does seem that Karpf wanted to emphasize the whole of the Auburn community. Therefore, he might have quite intentionally tried to spread the focus of the film across these different situations. To this end, Karpf includes Auburn horticulture professor Gary Keever, who played a central role in selecting and planting the replacement Toomer’s Oaks after Updyke poisoned the venerable originals.

Does this “storyteller by committee” approach work? It’s reasonable to say that it does. Yet, it is a principle of good storytelling to give the audience a “hook,” something it can latch onto. It’s true that the wider Auburn community really is the “hook” and the whole point of this film; Miracles On The Plains shows from so many angles how one special place came together so beautifully in the fall of 2013.

Yet, even within a wider community, one or two people should easily stand out as the foremost representations of that community, so that the story imprints itself upon the mind’s eye with more impact, more clarity, more resonance. The absence of that one powerful voice represents Miracle On The Plains’s biggest inadequacy.

This is a perfectly decent film, a little taste of comfort food for any Auburn man or woman. It’s chicken soup for the Auburn fan’s soul. However, if it aspired to be something greater, Miracle On The Plains didn’t offer a larger-than-cinema retelling of two larger-than-life college football moments from 2013.