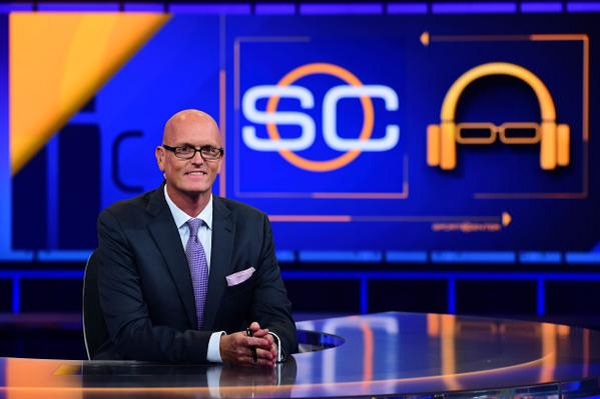 Scott Van Pelt got a head start on the debut of his new midnight edition of SportsCenter, signing on at approximately 11:30 p.m. ET following Ohio State’s 42-24 win over Virginia Tech. Though it was surely anticipated that the show would roll before midnight, hitting the ground running led to a somewhat wobbly start.

Having hosted an ESPN Radio program for more than six years, Van Pelt is obviously accustomed to talking longer than might typically be required during a SportsCenter segment. But it has to be different when alone at the anchor desk, without a co-host to play off from (or maybe it just felt different for the viewer who’s seen SportsCenter a certain way for so long), and Van Pelt seemed to feel that initially. Or maybe, if even for just a brief moment, the host felt the spotlight squarely on him as he strode into new territory — which would be completely natural.

But Van Pelt and the new show seemed to find their footing while interviewing Kirk Herbstreit about Ohio State’s victory. The conversation was relaxed and probably a bit longer than usual, which provided an idea of the vibe this midnight SportsCenter is going for. Van Pelt and Herbstreit weren’t batting quick questions and answers back and forth, looking for a good sound bite. There was time for some thought and insight, which felt refreshing.

Yet there were still some first-show kinks, which was most apparent during an attempted interview with Braxton Miller, who shined for the Buckeyes with 140 all-purpose yards and two touchdowns in his first collegiate game as a wide receiver.

Not everything goes right on the first night. pic.twitter.com/QRqltP1ELv

Miller couldn’t hear Van Pelt on the field, whether it’s because there was no audio in his headphones or the nearby band was playing too loudly. (Maybe having his towel between his ears and the headphones didn’t help either.)

That sort of gaffe can happen any time on live TV, of course, but it left Van Pelt out to hang for a few uncomfortable seconds and reminded everyone that this was a brand-new endeavor. If only Miller would have done another spin move on camera to make it look like he juked the SportsCenter producers as he did to Virginia Tech defenders.

However, Van Pelt quickly recovered, moving on to the highlight of the show: the celebrated return of Dan Patrick to the ESPN airwaves. The interview was initially awkward, as Patrick seemed a bit nervous to be back on the Bristol campus.

Maybe he and Van Pelt were wondering just how much inside baseball they could discuss on the air. But you couldn’t have Patrick on ESPN without addressing his place in the network’s history and how much he meant to SportsCenter as an institution. And if you wondered whether or not his rebellious streak remained, Patrick wearing his visitor pass on the air answered those questions.

Van Pelt and Patrick quickly found their comfort zone and had a relatively candid conversation that touched on the battles Patrick and Keith Olbermann had with management in trying to reign in egos and star profiles. (“We don’t want another Berman,” Patrick recalled as the sentiment, and you had to wonder if Chris Berman was watching at the time or how he might react upon hearing that remark.) Patrick also confessed how scared he was to leave ESPN and strike out on his own as a radio host, sharing a story about ordering a pitcher of beer just before 10 a.m. PT to calm his anxiety during his first show.

Again, this was an interview much like you’d see on a late-night talk show — almost more Charlie Rose than David Letterman — which we’re not used to seeing from the fast pace and quick hits of SportsCenter. The thoughtfulness of the conversation led to a somewhat polarized reaction on Twitter, with some feeling the interview was painfully awkward, while most enjoyed the nostalgia trip and insight into the workings of ESPN and sports media. It probably wasn’t for everyone, but that might be said often about what Van Pelt is doing here.

Twenty minutes into the midnight show, Van Pelt definitely got more comfortable with the “Bad Beats” segment focusing on games that messed with point spreads and agitated gamblers. That’s not something typically discussed outright on ESPN (other than Bill Simmons’ podcast), but it was a fun part of the show that addressed something many fans talk about.

Seems like @ESPN has finally found the new SportsCenter, a mix of late-night talk and highlights, and it’s live. pic.twitter.com/b9oon8jT3I

From there, the show really seemed to roll, fulfilling the normal duties of showing pertinent scores and highlights while also launching several of the new segments and elements that the network and Van Pelt have been promoting during the past few weeks. The flow of the program felt smooth, with quirkier features like “Where in the world isn’t SVP?” and “One Big Thing” folded in with what we typically expect from our nightly SportsCenter. Those components will surely get even better as the show finds itself and there’s far more content to cover in the fall and winter.

Above all, it was fun to see something different on the late-night ESPN airwaves, something that asks for and deserves more of our attention. SportsCenter has become a show we drop in and out of, especially because so many of us have already seen highlights online. It’s almost something in the background, capturing our attention in brief spurts to give us what we need while we’re getting ready for the day, at the gym, looking at our second screens or winding down before falling asleep.

Van Pelt’s version of the show isn’t suited to that, which will be an adjustment for many viewers. But with the intent of giving us some meatier, more substantial content worthy of more attention, it’s certainly a noble venture. Carrying a live program for a full hour (and probably more on some nights after games) is asking a lot of Van Pelt, and a variety of segments along with additional guests for interviews will likely help with that. Reinventing a familiar show is not a simple undertaking, but it’s easy to root for Van Pelt and watching him and this new SportsCenter grow in the weeks and months to come will be fun.