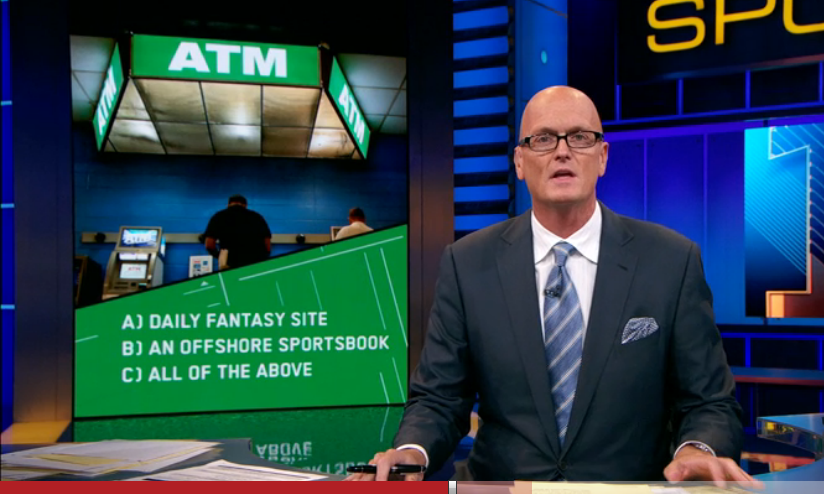 Viewers of Thursday night’s midnight SportsCenter were in for an unexpected treat as Scott Van Pelt unleashed a two minute and thirty second monologue on the lunacy of daily fantasy not being considered gambling. Van Pelt’s honest and at times passionate monologue is below and set against the inescapable backdrop of the daily fantasy industry growing at a frenzied pace with no end in sight.

I mean wow. It’s not hard to imagine that some ESPN talent farther down the totem-pole could find themselves in hot water for making similar comments. While Van Pelt’s monologue was more than fair, it’s just surprising he’s afforded this much editorial freedom when you consider:

– This wasn’t a free flowing discussion that landed on this topic, but a planned written monologue.

– It’s 2+ minutes. You’d have to win 5 episodes of Around The Horn to accrue this much time on ESPN.

– It’s Scott Van Pelt who has a large following and typically has been free and clear from ruffling any feathers in Bristol (that we know of) compared to other well known personalities.

– It’s on SportsCenter (well kind of) which is ESPN’s signature show and “the heart of ESPN” and probably a show that logged more than 8 figures of ad revenue from DraftKings and FanDuel this month. You almost NEVER see a show go out of it’s way to throw shade on a big time advertiser which makes this all the more shocking (and I don’t use that word lightly).

– Van Pelt’s monologue is comprehensive and doesn’t shy away from any aspect of the national discussion/irritation with the influx of daily fantasy. It’s honest and comes at a time when ESPN has been shouting daily fantasy’s praises every chance it gets and raking in the ad dollars while doing so.

– DraftKings and ESPN have an actual partnership, one large enough for ESPN president John Skipper to say in the press release about the partnership “DraftKings is a dynamic company – deeply connected to its fans – and we’re excited to have them on board as our official daily fantasy sports offering.”

Here we are almost two months exactly from the announcement of this partnership and roughly 3 billion commercials later, which has relentlessly chafed sports fans, and Van Pelt drops that bomb on an industry that has drawn the ire of a large number of sports fans. Even more surprising was the video was available almost immediately online and tweeted out through the SportsCenter Twitter account. I mean, this just looks odd given the clout of the SportsCenter brand and the amount of money the show takes in from daily fantasy companies.

It's time to stop pretending daily fantasy is not gambling: @notthefakeSVP's One Big Thing. http://t.co/vNWvZyj4jA

Van Pelt was also active on Twitter doubling down on his monologue.

@realconormcgrat @News_Prowler It's gotten so out of control something is going to give. That's was the point.

@j_parlay it's pretty simple. It's gambling. Saying it isn't to make money off of it is comedy.

If you think I’m in disagreement with Van Pelt or giving him gruff for taking such a stance when his employer is so entangled with the industry he’s calling out, that’s not the case at all. I 1000% agree with what what he said and think we are getting to a place where we need to have an adult discourse on why two companies get the golden hall pass to build themselves $10 billion valuations (a stated goal they’ve communicated to investors) under the guise of “it’s not gambling”.

I have no idea if there will be any blowback for Van Pelt (probably not I imagine and good for him) for the monologue but I imagine FanDuel and DraftKings will exert some frustration towards Bristol in the coming days. What’s kind of crazy is Fox and Comcast (owner of NBC) both have equity stakes in the major two companies while ESPN walked away from investing in DraftKings at the behest of Disney and thus ESPN may be the major cable sports channel most likely to have adult conversation about the rise of daily fantasy.

I asked Dustin Gouker who covers daily fantasy better than anyone over at LegalSportsReport.com for his thoughts (also to check to make sure I wasn’t insane for thinking this was a big deal) and below are his thoughts.

“An increasing number of mainstream media outlets have been equating DFS to gambling, or at least questioning how much the former looks like the latter. But until now, I don’t think I have seen anyone make the argument so clearly and forcefully, nor have I seen it come from a commentator of Van Pelt’s stature. It’s pretty shocking to see these comments come on ESPN, whom DraftKings will be paying hundreds of millions of dollars in the coming years for advertising and integration on its TV and internet platforms. At the same time, this makes it clear ESPN has given Scott Van Pelt full editorial control over his show; otherwise, we probably don’t see this segment.“

I too was surprised and encouraged to see Van Pelt have this level of editorial freedom (rarely seen at ESPN or really anywhere) and wonder if OTL may follow up on this at some point. Given the drumbeats have been getting louder in terms of a public debate at the legality of daily fantasy versus the illegality of sports betting, you have to imagine this adds a lot more momentum behind a day of reckoning for an industry that has become inescapable if you’re a sports fan fueled by overfunding, aggressive user acquisition spending tactics, and just as Van Pelt eluded to…… greed.

If you thought or hoped things were cooling down with daily fantasy, I think it’s likely we’ll continue to see the industry in the headlines as more people question its rise to prominence in the sports landscape.

We need to talk about Deadspin