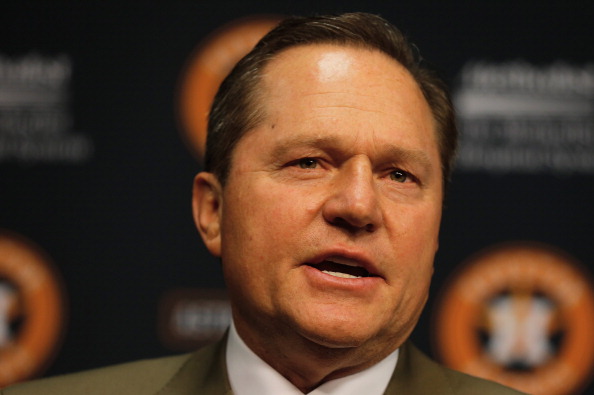 On Monday, MLB Network aired the first two rounds of the MLB Draft, an event that caters to the diehard baseball fan that immerses themselves in information about prospects each year. As I’ve explained in detail year after year, the Draft doesn’t really cater to the casual baseball fan since it’s different from the NFL and NBA Drafts – you’re not going to see the bulk of these guys this year, or even next year. Hell, we’re two years removed from the 2013 Draft, and only five first rounders (including NL Rookie of the Year candidate Kris Bryant) have played in the majors.

But I digress. During their Draft coverage on Monday, one name was notably absent from the mouths of MLB Network’s vast panel of analysts – super agent Scott Boras. Boras was reportedly advising (but not officially representing, because that would destroy the sacred notion of amateurism…or something) seven players taken on Monday, two of which saw their stocks fall because of signability concerns. Whenever you heard the word “signability” in relation to the MLB Draft, the inference is that “Scott Boras is advising this player, and they’re going to want a lot of money.”

Because the MLB Draft uses a soft slotting system instead of the hard slotting system you see in the NFL and NBA Drafts, teams can get creative with their picks – instead of consistently going with the best player on the board, some teams will take a lesser player that they can offer less money earlier in the Draft, and offer those savings to a better player they take later on that could be labeled a signability risk. The Dodgers did that with Boras advisee Kyle Funkhouser, and the Astros did it with Daz Cameron (the son of former MLBer Mike Cameron).

When Funkhouser and Cameron began to slip in the Draft, Boras’s name came up for the only time during the coverage, when Greg Amsinger brought him up as the reason both players were dropping. Jonathan Mayo then called him Lord Voldemort (He Who Shall Not Be Named), and that took care of that.

Of course, Boras turned this into an issue about himself rather than the players, and accused MLB Network of censoring their on-air personalities (including Amsinger, Mayo, Harold Reynolds, Dan O’Dowd, Jim Callis, and John Manuel). Here’s what he had to say in a text message to ESPN’s Jerry Crasnick.

“What I find interesting is, MLB has censored its announcers from referencing our company. MLB is not committed to a free journalistic standard.”

Boras then took aim at MLB Network’s assertions of why the players dropped, but didn’t really offer an explanation as to *why* they dropped.

“What upsets me is, teams have no issues with us and know our players are quality. Instead, you have analysts suggesting the reason players are still on the board is that teams don’t want to work with us. That’s an absolute misrepresentation of the truth of the matter.”

Next, Boras criticized MLB Network for not praising him about the Mark Appel situation from 2012. The Pirates drafted Appel eighth overall, and through Boras, he refused to sign. Appel returned to Stanford for his senior year and was taken with the first overall pick by the Astros in 2013, earning an extra $2.5 million as his signing bonus.

“There was nothing from MLB [Network] on how we were right. That is the No. 1 pick and a huge part of the story. But not a word.”

And to top off his rant, Boras criticized the analysts for not knowing how the Draft works compared to other sports…which may not be all that far off-base, considering some of the things that come out of Reynolds’ mouth each year during the Draft.

“Every MLB team reaches out to us about the draft and their plan and how they want to execute the process,. Some of the analysts are unaware of what’s going on. The MLB draft (unlike the NFL and NBA) is an economic draft. It’s about the level of the bonus, not the pick.

MLB Network issued a statement that didn’t directly address the comments made by Boras.

“MLB Network has televised the MLB draft for seven consecutive years, and each year its coverage includes comprehensive, independent analysis from former players, front office executives, journalists and draft experts from across the industry — including MLB.com and Baseball America.”

If Funkhouser and Cameron, the two players that slipped in the first round, both sign for slot value (which appears unlikely), Boras’s comments will appear justified. If they sign for the recommended value, they couldn’t have dropped based on signability, right? But if they both sign for an over-slot value, or simply don’t sign and head to college (Cameron) or his senior year at Louisville (Funkhouser), then weren’t the signability concerns discussed on MLB Network justified?

It’s Scott Boras’s job to get the most money for his clients. I think we all realize that. And by the same token, signability for Boras clients has been a concern for years – remember the JD Drew debacle in 1997? I don’t think citing Boras’ influence on draft picks was an unfair move by MLB Network, and Boras knows they’re right. He’s just taking issue with any coverage of him that isn’t 100% positive.