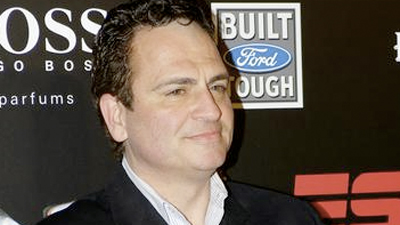 Since it’s not April 1st, this is incredibly a story that must actually be true – a real newspaper is going to be paying Jay Mariotti money to be writing a sports column yet again.

The San Francisco Examiner has hired Mariotti to become their new sports director and columnist, because apparently all of the other qualified candidates from around the globe have already been exhausted and Mariotti is the last sportswriter on earth.

Here is the announcement from the Examiner:

Jay Mariotti, one of America’s foremost sports columnists and commentators, is joining The San Francisco Examiner as sports director and columnist. Mariotti is best known for his work at the Chicago Sun-Times, where he spent 16 years as the city’s dominant sports columnist, and an eight-year run as a regular panelist on ESPN’s debate show, “Around The Horn.”

“In a city that lives and breathes sports, we are honored to have one of the best sports writers in the nation bringing his talents to The City to cover our local teams as well as the broader sports world for the Examiner,” said Glenn Zuehls, Examiner publisher.“I am thrilled to develop premier content in a city overflowing with powerful sports stories while designing and planning a 21st-century presentation,” Mariotti said.

If you’ll recall, Mariotti was one of the first very loud and very angry local columnists to have his presence felt on the national stage in this newfound age of bluster thanks to his appearances on Around the Horn.  But his career came at the Chicago Sun-Times and ESPN came to a screeching halt thanks to domestic violence charges.  Mariotti has been placed on probation twice due to domestic violence incidents, pleading no contest both times and avoiding jail time.  Since then, he’s been on the periphery of the daily sports conversation, until now, when unbelievably somebody has decided that they want Mariotti to lead their sports operation and drive it off a cliff.

Aside from the domestic violence charges that brought down his national career, Mariotti also earned his reputation as one of the least liked sportswriters in America.  He’s feuded with almost anyone and everyone under the sun and been involved in one controversy after another.  When he got booted from Around the Horn, even his fellow panelists remarked how his role as “ultimate contrarian” had led to people reveling in his demise.

Furthermore, when you think of people you want to bring your paper into a new, digitally focused age, angry curmudgeonly sportswriters don’t exactly come to mind.  Haven’t we already heard everything Jay Mariotti has to say?  Are there seriously no new voices out there in sportswriting who deserve an opportunity like this?

As you can imagine, the reaction to Mariotti’s hiring has been a mix of horror and disbelief, because reading a Mariotti column is about as satisfying as crawling through a bed of hot coals to lie on a bed of rusty nails.

The worst thing to happen to San Francisco since 1906. http://t.co/3CYupQeglH

Jay Mariotti compared himself to Ross Mirkarimi in DEFENSE of his new gig as sports editor of SF Examiner.

Pretty much says it all.

hey guys Jay Mariotti is back and even though he's about as relevant as Pogs, he's got some hot takes for us

Locally, Mariotti’s hire has been met with headlines like, “Terrible human being Jay Mariotti hired by San Francisco Examiner.”  He’s going to fit in so nicely in San Francisco.