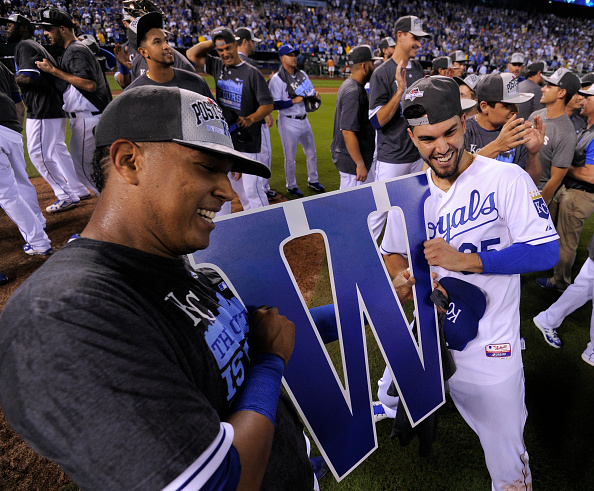 The final local MLB ratings numbers are in for the 2015 season, and the reigning AL champion Kansas City Royals are at the top of the mountain. Fresh off of their first Postseason appearance since 1985, Royals ratings were up a whopping 90% this season, checking in at a robust 12.33 on Fox Sports Kansas City. The club earned the AL Central title, the first ever in team history, and are heading into the playoffs on a high note. At the All-Star Break, the team was drawing a 12.06 rating on FSKC, which was the highest in baseball since 2007. The 12.30 rating is the highest full season local average rating for an MLB team since 2002, when the Mariners averaged a 13.2 rating one season removed from a 116 win season.

Rounding out the top five in local ratings this season are a number of familiar names – the Cardinals, Pirates, Tigers, and Orioles. The Cardinals were up a healthy 30% from 2014, finishing with a 10.01 rating on Fox Sports Midwest. The Cardinals drew baseball’s best local ratings during the 2014 season, but their overall average was just a 7.76 rating. The Pirates drew an 8.10 average on Root Sports Pittsburgh, up 11% from 2014 when they also finished third with a 7.49 average rating. The Tigers were down 17% to a 6.35 from 2014, when they drew a 7.62 rating and finished behind only the Cardinals. Finally, there are the Baltimore Orioles, whose 5.35 rating was unchanged from 2014 on MASN.

Kansas City and St. Louis ranked third and fifth overall in largest increase in local ratings, but who filled out the rest of the top five? Unsurprisingly, the Houston Astros thrived on Root Sports Southwest as the team won the AL’s second Wild Card and contended for the playoffs all year. With the struggles of CSN Houston in the rear-view mirror, Houston’s ratings jumped all the way up to 2.15, an increase of 497% from 2014. A rise of that magnitude won’t be in the cards for the 2016 season, but considering they had some of the lowest ratings in baseball last year, every little bit helps. The Chicago Cubs also surged into contention this year, and their local ratings on CSN Chicago also jumped – they were up 122% to a healthy 3.31 rating. In 2014, the Cubs (along with the Astros) had one of the five worst local averages in the game.

The season wasn’t nearly as good for Chicago’s other team, however. The White Sox took another hit on CSN Chicago, falling 29% (fifth largest decrease in the league) to a 0.82 rating (lowest in baseball). Last year, the White Sox were up just 4%.

An interesting thing is happening in New York – the Mets are quickly closing the gap on the Yankees. Mets ratings were up 56% this season to a 2.64, baseball’s fourth-highest increase. Yankees ratings dropped 7% to a 2.78, a difference of just 11,000 households. Hey, making the playoffs for the first time since 2006 will do that for a club.

The news wasn’t so great in Los Angeles. Both the Angels and Dodgers ranked in the bottom five in average rating this year, checking in at 1.43 and 0.95 respectively. But while Angels ratings were down 15%, Dodgers ratings were up 25% – the Time Warner/Charter merger clearly helped the Dodgers and SportsNet LA. The Marlins (up 9% to a 1.76) and Athletics (down 31%, third-worst decrease in baseball, to a 0.91, second-worst rating in baseball) rounded out the top five of the lowest-rated teams in the league.

The Brewers and Indians both experienced healthy gains of 48% and 14% last season, but took hits this year – Milwaukee fell 30% to a 3.99 rating on Fox Sports Milwaukee, while Cleveland fell 35%, also to a 3.99, on SportsTime Ohio. But neither of those teams, nor the A’s, nor the White Sox, took the biggest hit this year – that would be the incredibly fun to watch Atlanta Braves, whose ratings on Fox Sports South and SportSouth dropped 36% to a 1.81, just outside of one of the lowest marks in the league.

So folks, when the Postseason ratings come in as October rolls along, baseball won’t be panicking if the numbers are disappointing – its teams are doing just fine locally.