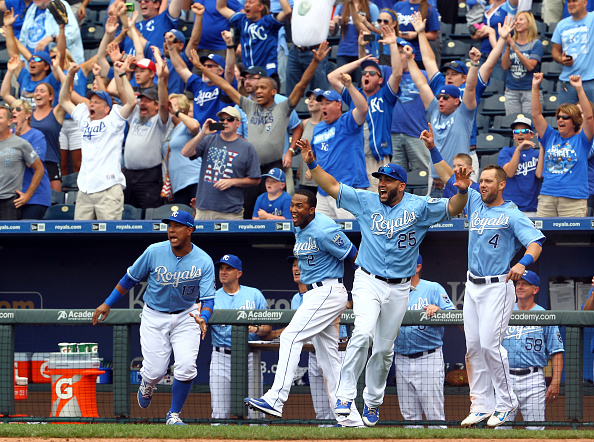 The Kansas City Royals are riding the high of their 2014 AL pennant both on and off the field. On the field, the Royals are an AL-best 52-34, and lead the AL Central by a league-high 4.5 games. Off the field, the Royals are drawing an average rating of 12.06 on Fox Sports Kansas City through the first half, baseball’s highest rating at the season’s midway point since the 2007 Red Sox drew a 12.08 on NESN. All of this fancy ratings data comes courtesy of Sports Business Daily’s midseason MLB ratings report.

The average rating for Royals games is a stunning 119% up from last year at the midway point, and the second-highest jump among all MLB teams this season. But if the Royals want to catch Boston’s full season mark, more viewers in the Kansas City area will need to tune in – the Red Sox finished 2007 averaging a startling 12.20 mark on NESN en route to their second World Championship in four seasons.

Elsewhere in Missouri, the St. Louis Cardinals are once again drawing strong local ratings, averaging a 9.25 on Fox Sports Midwest in the second half. That mark is behind only the Royals in baseball, and represents a 23% jump from last year. The Tigers are third in the first half local ratings with a 7.22 average on Fox Sports Detroit, which is actually down 4% from last year. The Pittsburgh Pirates remained strong on Root Sports Pittsburgh, leaping 11% to a 7.01 in the first half. The Baltimore Orioles round out the top five in first half local ratings with a 5.67 on MASN that is flat from 2014’s first half.

Which teams have seen the largest increases? Well, I already mentioned the Royals, but they’re being outpaced by the surprising Houston Astros, who are up a jaw-dropping 347% to a 1.70 average on Root Sports Southwest. But remember – a year ago, the Astros were in the midst of a carriage battle on CSN Houston, and most of the market couldn’t see their games if they wanted to. Once you combined improved carriage on a new network and a young, exciting team that is succeeding in the standings, you’re ripe for a ratings spike. The only other team in baseball that has at least doubled their first half rating from 2014 this year is the Chicago Cubs, up 100% to a 2.92 on CSN Chicago thanks to a team that has been incredibly successful so far. The Padres (up 56% to a 4.59) and Nationals (up 41% to a 2.69) finish off the top five ratings climbers this year.

Even though the Cubs are thriving on CSN Chicago, it’s not all good news. The Chicago White Sox have seen their ratings fall into the tank, dropping a league-worst 43% to a 0.82 average rating, ahead of just the Dodgers at 0.75 (mired in a carriage dispute of their own). But in regards to the Dodgers, SBD notes that Dodgers ratings are averaging a 1.15 rating over the last month since SportsNet LA was added on Charter – it’s still a bottom three mark in baseball, but hey, there’s hope! The Oakland Athletics (down 17% to a 1.09), Los Angeles Angels of Anaheim (down 6% to a 1.34), and the aforementioned Astros make up the rest of the bottom five lowest rated teams this season.

Finally, we have the teams that have seen their average rating drop the most. The White Sox have seen the biggest drop, and the rest of the bottom five is made up of teams struggling compared to where they were a year ago. The Atlanta Braves, for all the beat writer nonsense about this being a more fun and exciting team to watch, are down 32% to a 2.03 on Fox Sports South and SportSouth. The Cleveland Indians have dropped 30% to a 4.21 on SportsTime Ohio. The Milwaukee Brewers have fallen to 27% to a 4.32 on Fox Sports Wisconsin. The Colorado Rockies have slipped 18% to a 2.43 on Root Sports Rocky Mountain. Funnily enough, even though the Indians and Brewers have both seen large drop offs from a year ago, they’re still in good shape with average ratings above 4.0.

Major takeaways? The midwest markets are still thriving, the two beltway teams are both trending in the right direction, the two Chicago teams are going opposite directions in the standings and in the ratings, and success doesn’t seem to matter all that much in the Los Angeles/Anaheim market.