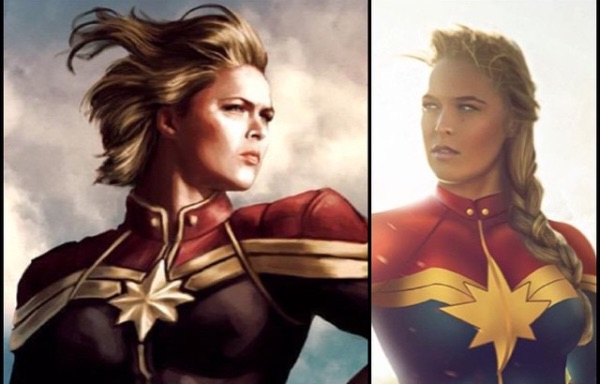 Since 2008, Marvel and Disney have been in the business of printing money. Also, two or three times per year, they conspire to put out the best superhero movies in the industry. Hence, all the money.

Marvel was so successful with the first phase of its movie plan that phases two and three include another ten movies set for release between May 2016 and the summer of 2019.

One of those movies—set for release on November 2, 2018—is Captain Marvel, and it’s the only leading role of the next nine films that yet to be officially cast.

Ronda Rousey may have something to say about that.

Since the reddit AMA I've received so many badass Ms. Marvel/Captain Marvel edits! There were so many cool ones I couldn't pick just one to share – here's 1 series of 2 Big thank you to contributing artists: @bosslogix (two on right) and @salman.artworks (left)

Asked during a Reddit AMA last week what superhero she’d like to play in the movies, the UFC star reminded fans that Ms. Marvel is still available.

If you were to be in a superhero movie, which hero would you play?

Thanks for doing this AMA!

well… a lot of the good ones have been taken, but I’d like to vie for Miss Marvel.

As Reddit user PartiesLikeIts1999 was quick to reply, “She’s the Captain Marvel they’re going for in the announced movie, isn’t she?”

She is indeed. (Pardon me while I imagine this Reddit user typing to Rousey while sitting in a red Corvette wearing a raspberry beret as it starts to rain.)

As the story goes, Carol Danvers was a member of the United States Air Force who worked with NASA on some top-secret missions, one of which involved the Kree Empire at which time Danvers befriended the Kree soldier named Mar-Vell. During one skirmish, Danvers was kidnapped and in the fight to get her back, she was knocked into some crazy space magnet thingy that turned her half Kree, giving her insane physical abilities no human should have.

Come to think of it, insane physical abilities no human should have actually sounds a lot like Rousey.

Since the reddit AMA I've received so many badass Ms. Marvel/Captain Marvel edits! There were so many cool ones I couldn't pick just one to share – here's 2 series of 2 Big thank you to contributing artists: @alexmurilloart (right) and Hugo Dourado (left)

How Ms. Marvel became Captain Marvel is somewhat typical comic politics. Captain Marvel had never been a hugely popular title despite many attempts over several decades, so a few years back Marvel decided to kill him off—well technically the Phoenix Force killed him—at which time Carol Danvers, then Ms. Marvel, took the title Captain Marvel.

The reboot has been so good that Marvel is giving the character a solo movie, becoming the first female lead role in the Marvel Cinematic Universe.

While Black Panther has been cast for some time—Chadwick Boseman has signed on to play the title role in that film, and will have a part in next year’s Captain America: Civil War as well—and Dr. Strange recently locked up three major stars for that film—Benedict Cumberbatch playing the lead role, Chiwetel Ejiofor as Baron Mordo and Tilda Swinton taking the role of The Ancient One—there hasn’t been anything official about who will take the role of Danvers.

Maybe it could be Rousey.

Marvel is going deep into the character vault for phase three of their movie franchise, which puts more importance on getting the right actors to play the roles.

Would they risk giving a lead role to an athlete they aren’t sure can even, you know, act?

They may get the chance to find out soon. Variety reported earlier this month that Rousey’s book “My Fight/Your Fight” is being turned into a movie, with Rousey playing herself in the lead role.

While the project isn’t yet in production, it’s the type of film that should be fast-tracked to capitalize on Rousey’s current stature in the world of sports. If that movie doesn’t come out until 2018, there’s a chance she may be yesterday’s news. (It wasn’t long ago that Gina Carano was on a short list of crossover stars who should be up for the role of Danvers. Rousey’s interest probably throws Carano’s chances out of the octagon.) 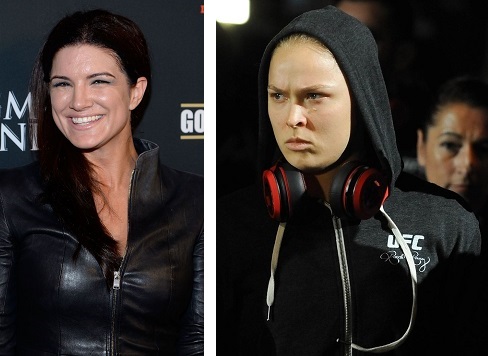 If Rousey shows some acting chops, as they say, by playing herself, she will certainly get the opportunity to play other roles, perhaps one as big as a flying female Avenger.

In reality, the role is most likely going to Emily Blunt, as Marvel previously offered Blunt both the roles of Black Widow and Agent Peggy Carter, but the timing wasn’t right. It’s hard to imagine the MCU without Scarlett Johansson as Widow, and Hayley Atwell has been amazing as Agent Carter, but rumors are strong enough that it seems clear Marvel is hoping the third time’s the charm for Blunt.

In a recent interview with Vulture, Blunt addressed the rumor, saying the role isn’t official, but not denying interest.

Oh! No one’s offered me that officially, so it’s … [laughs] very unofficial. I think it’s fan-casting, which is always very nice. But nothing official has been offered, for sure. 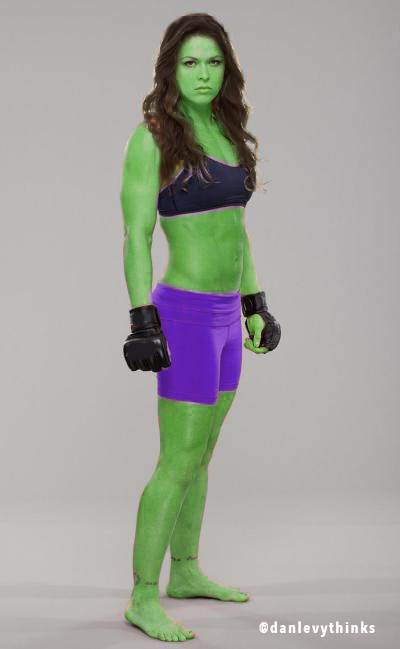 Fan casting or not, the non-denial isn’t good news for Rousey fans who want to see her in a super role. Still, until any news is official—knowing Marvel’s past history with casting announcements, I’d expect Captain Marvel to be locked down in time to appear in a post-credits tag for Guardians of the Galaxy 2 in May,2017—there’s still time for Rousey to land the role.

Personally I’ve always been in the Katee Sackhoff camp, though the former Battlestar Gallactica star probably doesn’t have the profile for a role that big. Game of Thrones star Natalie Dormer is another name that would fit the role, if Marvel felt like either ignoring her bit part kissing Captain America (or using it to involve some sort of anti-aging magic to the Kree transformation and setting Captain Marvel’s origin further back in time.) It’s probably going to Blunt.

And yet, the more I think about it, if Rousey can act, she might be great as Danvers. That, or maybe Jennifer Walters. Just saying…