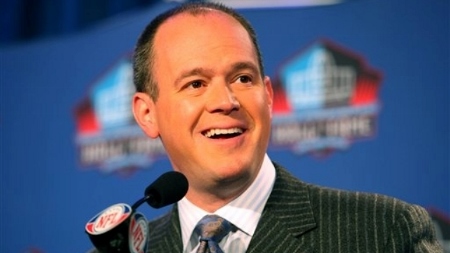 Rich Eisen left ESPN for NFL Network way back in 2003. Since then, he’s been one of the primary faces of NFLN, and ESPN has cycled bucketloads of hosts in and out of the SportsCenter anchor chair.

Adweek talked to Eisen this week about his ESPN departure and whether or not it was a tough decision. Judging by his response, Eisen is clearly happy with the way things worked out.

TVNewser: You were the first anchor added to the NFL Network staff when it launched in 2003. Was it a tough decision to leave ESPN for a start-up network?

Eisen: Not really. By the time I left ESPN in 2003, SportsCenter had become a far different show than the one I initially joined in 1996. Thanks to the proliferation of information being consumed on mobile devices and the internet, management changed SportsCenter from being a show where highlights and storytelling ruled the day to a show where analysts ruled the day. In other words, with the growing assumption that people tuning into the show had already seen the highlights, SportsCenter went from a show about WHAT happened to a show about WHY something happened, with a debate between analysts attached. The role of host had changed entirely, so I asked to do other things in addition to SportsCenter. When that was mostly refused by management in charge at the time, moving out to Los Angeles to be the tip of the spear of a new channel devoted to the NFL became a no-brainer.

That response by Eisen clearly makes sense – ESPN didn’t have their airwaves completely flooded with other studio programming back in 2003,Trey Wingo was already hosting NFL Live (and NFL2Night before it), and NFL Insiders didn’t exist. ESPN also didn’t own the rights to Monday Night Football at the time, and Chris Berman was (obviously) still entrenched as the host of Sunday NFL Countdown.

Nowadays, you see many more SportsCenter anchors branching out into various other studio hosting jobs at the network – Rece Davis, Suzy Kolber, Karl Ravech, Sage Steele, and Adnan Virk among many others are doing more than just sitting at the desk every night. If Eisen was at ESPN in 2013 rather than in 2003, he likely also would have ended up in a more comprehensive role, but you can’t rewrite history.