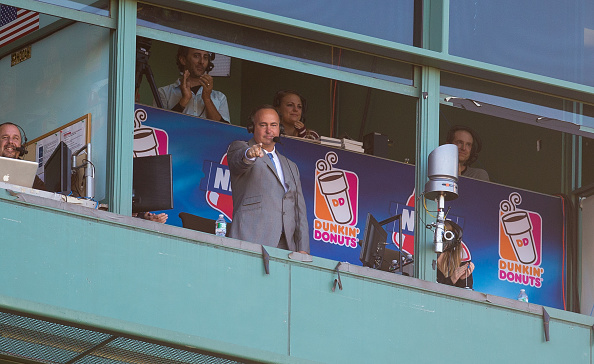 It’s been an emotional month for Don Orsillo. Ever since news leaked in August that he will not return as the TV voice of the Boston Red Sox, he’s been dead man walking at Fenway Park. Red Sox fans who have grown accustomed to his announcing over the last 15 years on NESN have come out in droves asking the network to keep Orsillo. There are no less than nine petitions at Change.org, but the main one has over 62,000 signatures.

However, the petitions despite the support will be all for naught. It appears that Orsillo will be heading to San Diego to eventually replace Dick Enberg who announced last Friday that he will be retiring at the end of the 2016 season.

ESPN.com’s Gordon Edes reports that the deal to bring Orsillo out west is all but done with an announcement expected after the regular season:

In another week or so, there will be an announcement out of San Diego that the Padres have named Orsillo to their broadcast team and as the ultimate successor to Dick Enberg, who last week announced that next season will be his last, at age 80. The Padres are thrilled to have Orsillo, and plan on locking him up for a long time at a generous salary. There will be a Fox network component to the new job as well, and the Padres, sensitive to how troubled Orsillo is at the prospect of leaving his young daughters behind, will make trips west for the girls part of the deal.

Orsillo is a New Englander through and through. He was born in Massachusetts, grew up a Red Sox fan, interned in the Red Sox radio booth, called minor league hockey in Springfield, MA, called the minor league Pawtucket Red Sox on radio before he got the call to join Jerry Remy on NESN in 2001. He thought he had his dream job and was hoping to stay with the Red Sox for the long term, however, team chairman Tom Werner and NESN general manager Sean McGrail made the decision to “re-energize” the Red Sox broadcasts amid falling ratings by blaming Orsillo and replacing him with radio voice and ESPN’er Dave O’Brien.

As mentioned by Edes, the contract with the Padres will allow Orsillo some national work on Fox and FS1. Orsillo was a voice on TBS’ MLB Postseason coverage between 2007 and 2013 usually calling one League Division Series.

It’s good that Orsillo will land on his feet with a gig in San Diego, but he’s sad to leave his beloved New England. Orsillo moved to Rhode Island to be closer to his daughters and it appears the Padres will allow them to travel west during the summers so he can be with them.

At the last Red Sox home game that he will ever call on Sunday, fans paid tribute to Orsillo with signs, chants and the team even made a video that played in the park in the seventh inning, but wasn’t aired on NESN.

“Don Or-sil-lo,” they chanted for the kid who was born in Melrose, Massachusetts, grew up in Madison, New Hampshire, went to school around the corner at Northeastern, dreamed of broadcasting for the Sox and never wanted for another job.

Don Orsillo waved, and patted his heart, and looked down at the Sox dugout, where he saw that the players were standing on the top step, looking his way, and interim manager Torey Lovullo made a gesture meant for him, and that’s when the façade finally broke.

“It was unbelievable,” Orsillo said later. “I tried to talk. Nothing was coming out. I think I missed a batter.”

It was a tribute that will make Orsillo fond for his final days with the Red Sox, but as the Padres prepare to make him their announcer for many years to come, it appears that his NESN career will just be a footnote when his days in San Diego are finally done.