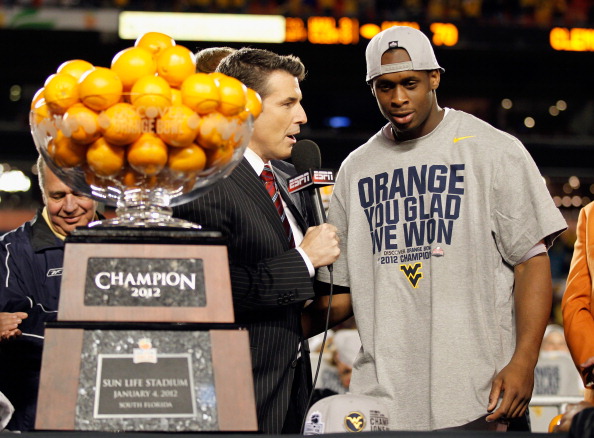 Tweeted by the always connected James Andrew Miller, co-author of “Those Guys Have All the Fun: Inside the World of ESPN,” we learn that Rece Davis will become host of the football version of College GameDay:

This ends a long era on College GameDay. Fowler had been the host of the pregame show dating back to 1990 and replaced Brent Musburger as lead college football play-by-play announcer last year. Fowler hosted both GameDay and called the main college football game during the regular season, but it was Davis who hosted the postseason version of the show for the College Football Playoffs.

As for Davis, he will leave the Bristol studio where he had been the main host and been teamed with Lou Holtz and Mark May. Now he’ll be teamed with Kirk Herbstreit, Lee Corso and Desmond Howard. Some speculated that if this move wasn’t made, Davis might leave ESPN for another network, but the Worldwide Leader has apparently made both Fowler and Davis happy with two separate progressions.

Davis currently hosts the basketball version of College GameDay and will now host the show from September all the way through March Madness.

As for who will replace Davis in the studio, there are plenty of candidates including Adnan Virk and Scott Van Pelt. And there’s even an opportunity for ESPN to go one step further and bring in a totally new cast for its main studio and College Football Final, but there’s plenty of time for the network to decide what it wants to do.

In the meantime, Davis who also calls play-by-play for selected college basketball games and the Thursday night college football game, will have the opportunity to see all parts of the United States as host of GameDay beginning in the fall.