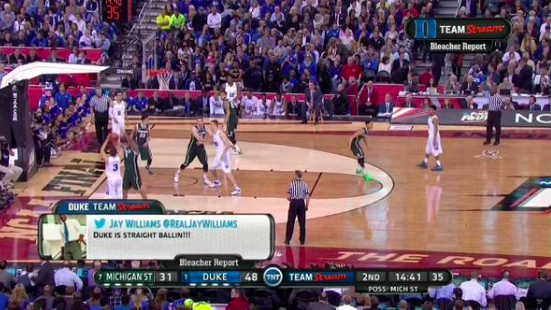 After mass confusion in the first year of existence, we were keen to see if America could catch on to what exactly was happening with the Team Stream telecasts for the Final Four in Year 2 of the concept.

The results were actually much improved from a year ago.  As seen above, there was a logo on every channel labeling which broadcast you were watching.  For instance, on the Duke Team Stream it was clearly marked both at the bottom of the screen and in the upper right corner.  Furthermore, the DirecTV program guide labeled the alternate feeds on truTV and TNT as “Team Stream” to differentiate them from the regular NCAA Tournament broadcast on TBS.  Finally, announcers acknowledged the different feeds on each channel multiple times throughout the Duke-Michigan State game.

Simply put – there were a LOT of precautions put into place to let viewers know what was happening with the Team Streams.  And by and large, it worked.  There was much less confusion over the telecasts this year.

Buuuuuut…. that doesn’t mean there weren’t at least a few people who were angrily throwing things at their television screen complaining about biased commentators not knowing they just had to hit the channel up button to solve their problems.  As always, these are Real Tweets from Real People…

These commentators are so biased against state rn lol

These TNT announcers could not be any more biased towards Duke

Oh my gosh! I just want to mute the #MSUvsDuke game. I have never seen so much bias. Not cool #tnt.

Be impartial… @marchmadness TNT is way too biased for Duke! It's annoying #MarchMadness #tnt #FinalFour

Is the game on any other Channel besides TNT? By far the most bias Duke announcers I've ever heard…

TNT could not be any more bias towards duke right now..what is the #duketeamstream

Let’s be real – TNT and truTV can do Team Streams for 50 years and there will still be some people that are totally lost.  This might be the best deductive reasoning we can hope for, America.