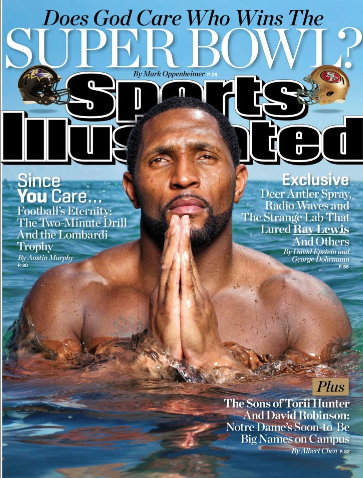 It can be difficult for former players to offer a fair opinion on their former coaches or organizations, and ESPN analyst Ray Lewis provided what seems to be an example of that Monday. On ESPN’s Monday Night Countdown ahead of the Bills-Patriots game, Lewis said he’d take Buffalo head coach Rex Ryan (his former defensive coordinator in Baltimore) over New England head coach Bill Belichick “all day,” even using a convoluted double negative to do so:

Thx for reminding how silly you are @raylewis "Ryan is better than Belichick" pic.twitter.com/ZZAgP85ggx #Patriots #Bills

“I’m not choosing nobody else but Rex Ryan,” Lewis said. “If you’re asking me, Bill Belichick or Rex Ryan, I’m taking Rex Ryan all day, because Rex relates to players, as well as myself, more like a father.”

That fatherly relationship would have to go a long way to make up the difference in these coaches’ success, though. As SportsGrid’s Tanya Ray Fox notes, Belichick has a .780 regular-season winning percentage and a .636 postseason one, while Ryan’s .486 in the regular season and .666 in the playoffs. That’s probably part of what led to Lewis’ fellow ESPN analyst Steve Young having to work awfully hard to keep from laughing here:

Lewis’ claims were made fun of by former NFL executives, too, including Amy Trask and Joe Banner.

Rex Ryan over Bill Belichick? In what universe? Seriously.

But hey, at least Lewis was defended by NFL.com writer Conor Orr!

Lewis’ statement was and will continue to be met with the confused and clamorous rebuttals of people who have never played in the NFL before. Ryan’s approval rating is higher because, like Lewis said, he treats his players like family. Belichick prefers an MO that allows him to make the kind of calculated decisions he’s made over the years without much in the way of emotional attachment. I’m sure there is an element of care and compassion with Belichick, but it does not come anywhere close to the relationship Ryan has with his players.

If nothing else, Ryan will come to define the modern Player’s Coach. He might never win a Super Bowl, and he might end up proving that his ultimate fault was caring too much.

You go, Conor. Keep telling everyone who hasn’t played in the NFL their rebuttals are confused and clamorous. Wait, what does that make you? And poor Rex Ryan, cursed with the ultimate fault of “caring too much.” If only he’d been cursed with Belichick’s ultimate fault, winning games, then Lewis and Orr wouldn’t have to bend over backwards to make arguments for Ryan.