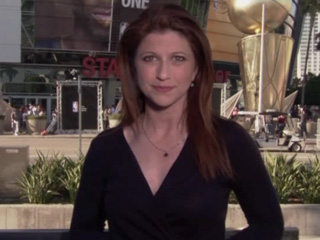 Floyd Mayweather’s not going to win any more fans for this move.  The morning of the Mayweather-Pacquaio fight two prominent sports media personalities – Michelle Beadle of ESPN and Rachel Nichols of Turner Sports – said they were banned from attending tonight’s fight in Las Vegas. 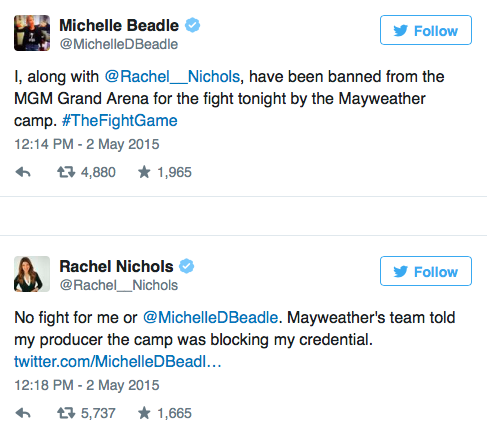 Why would Mayweather’s people not want Beadle or Nichols present?  Both have been outspoken with regards to Mayweather’s domestic violence past.  Nichols tweeted out this interview with Mayweather from last fall:

Here's my interview with Floyd Mayweather from this past fall, the same week the Ray Rice video was leaked: https://t.co/yFiBhEQhFb

And Beadle sent these tweets last year when she took a second look at her past involvement with the controversial fighter:

Ok. To clarify. I made a huge mistake during the ESPYs in an interview w/ Mayweather. I also was not aware of just how horrible his record..

..w/ women has been over the years. After doing the reading, I guarantee I won't make the mistake of treating him or his life lightheartedly

Mayweather’s history with domestic violence has caused many individuals to boycott tonight’s fight.  The fact that his camp is now actively blocking credentials of two of the most popular women in the sports media world who have dared to bring that to light is only going to intensify the backlash against him.

How the Mayweather camp could think this is a good idea is truly astounding.  It gives the appearance that Mayweather and his handlers are trying to shut down two prominent women in the sports media world and will only embolden his harshest critics.  Does Mayweather’s camp think that by blocking Nichols and Beadle from the arena tonight it’s going to make all of his problems go away?  Please.  It’s one of the most short-sighted and narrow-minded decisions in a long time.

UPDATE: It’s boxing, so this situation has to get weird.  See if you can follow along with the latest developments…

Publicist Kelly Swanson tweeted that neither Nichols nor Beadle’s credentials were pulled, denying what the two reporters tweeted:

No one including ME banned @Rachel__Nichols from covering the fight. She is already credentialed. #Facts

And @MichelleDBeadle isn't even on the press list. She's credentialed through @HBOboxing. Yes credentialed. #Fact#2

Sports Illustrated’s Chris Mannix reports that in addition to Mayweather and Beadle, USA Today’s Martin Rogers was declined a credential:

In addition to banning @Rachel__Nichols and @MichelleDBeadle, Mayweather declined to credential @mrogersUSAT, who has written great DV stuff

And to add to the quagmire, there are multiple reports that Beadle’s situation is being resolved and she will have a credential for the fight:

HBO source confirms @MichelleDBeadle's credential has just been cleared for Mayweather fight. Not sure about @Rachel__Nichols

HBO spokesman tells me the @MichelleDBeadle credential issue is being resolved, statement possibly coming. She'll be at fight I'm told.

For her part, Beadle says her credential was pulled and then re-approved.  She says she won’t be covering the fight tonight and focusing on her beloved Spurs facing off against the Clippers.

After hearing my credential was pulled, I went home. Told this morning that HBO was able to get it re-approved late last night.

That's it. All she wrote. I will now concentrate on Game 7. #GoSpursGo

We’ll continue to update as more details come in.

UPDATE II: ESPN’s Jeremy Schapp files this report, which seems like the most logical way this all played out – that Beadle and Nichols’ credentials were messed with, decisions were reversed, but the reporters chose to take a stand.

Mayweather promotions insisted on having approval of the credential applications, per source. It's in the contract.

Per source, Mayweather promotions blocked Beadle last night. Top Rank appealed to Moonves, who had decision reversed at about 1030 pm.