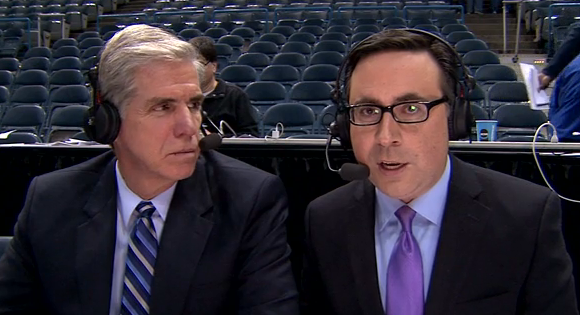 It’s a new world for CBS and Turner Sports as they embark upon another March to Madness.

Bill Raftery will call his first Final Four on television, to the delight of 99.8 percent of fans. (The few who don’t like Onion Man will not be taken up to heaven when The Rafture comes… you have been warned, unbelievers.)

Because Jim Nantz — like it or not — is the voice of both CBS Sports and the Final Four, the Verne Lundquist-Bill Raftery pairing most of us adore has been broken up. CBS and Turner must reshuffle the deck and come up with a number of new pairings. The departure of Turner analyst and Final Four voice Steve Kerr to the NBA’s Golden State Warriors only adds to the sense of mystery surrounding the eight announce crews that will handle the round of 64 and the round of 32.

(Remember: You don’t have to say “second round” or “third round” if you don’t have to. Using numbers is the best way to get around the absurd labeling of NCAA tournament rounds, which lasts only one more year, thank goodness.)

Yes, the most popular “media prediction game” during the NCAA tournament is the attempt to guess how the announce crews and time slots will line up for the regionals, otherwise known as the Sweet 16. Which Final Four national semifinal will be the early/late game? That’s another favorite every spring. However, 2015 is unique in that it has raised some fresh questions about the pairings CBS and Turner will give to college basketball fans for the opening weekend of the Big Dance.

Let’s explore some predictions, shall we?

Let’s start with the safest prediction on the board and work our way to the harder calls.

In the world of “Easy Calls 101,” Ian Eagle and Jim Spanarkel will remain intact. This pairing has established such great chemistry over the years. Spanarkel — relative to the (small) amount of exposure he receives during the regular season — is and has been one of the best college basketball analysts in the nation. He rarely gives viewers reason to get upset. Seriously — do you groan or curse during a Jim Spanarkel game? He and “Bird” (an affectionate nickname for Eagle used by Bill Raftery himself) are always welcome at the March Madness table. There’s no point in separating a strong announce pair.

Other announce crews should remain the same, though their statuses shouldn’t be as rock-solid certain as Eagle-Spanarkel. Purely on a predictive level, the Brian Anderson-Dan Bonner team figures to have a good chance of returning for 2015. Kevin Harlan and Reggie Miller — two energetic voices in their respective roles of play-by-play man and color commentator — figure to sit alongside each other again. However, both men were accompanied by Len Elmore in a three-person booth in 2014.

This is where the chess pieces begin to move… or at least, could move.

If you recall the 1992 Kentucky-Duke East Regional Final — for many, the greatest college basketball game ever played — the broadcast team that evening in Philadelphia was Verne Lundquist and Len Elmore. If Verne is going to be separated from Bill Raftery, it would be a lovely act for CBS to reunite one of the network’s signature voices with Elmore, whose chops as an analyst are not as strong as they once were. (There has been something of a Tim McCarver-like decline in Elmore’s work. Like McCarver, he was at the top of his profession in the early 1990s, but has lost his fastball with age.) You can debate whether Elmore should be calling a regional final — which he would if he was paired with Uncle Verne — and yet still appreciate how neat it would be for Lundquist to be reunited with a former partner.

If Verne does not get Elmore — one of the few choices that really makes sense for him — the other obvious call is Clark Kellogg, who has worked with Lundquist plenty of times in the past and enjoys an easy rapport with the CBS veteran. Lundquist-Kellogg might be a betting person’s favorite, but Lundquist-Elmore — leaving Harlan and Miller in a two-person booth — would also make plenty of sense and not come across as a particularly odd move.

Next, as we remain in uncertain territory, one would have to think that Carter Blackburn — back in the CBS fold after spending time at ESPN — will get an assignment. Blackburn ought to be a first-weekend voice if only because Andrew Catalon did THIS during his turn at the NCAA tournament microphone a year ago. Assuming Blackburn gets the nod, it would only be natural for him to work alongside Catalon’s 2014 partner, Mike Gminski.

Harlan-Miller, with or without Elmore.

Lundquist with either Elmore or Kellogg.

We have three left, and one of them — the “A Team” of Nantz, Raftery, and Grant Hill — is set in stone.

This leaves two crews, with Spero Dedes (at the lower end) and Marv Albert (at the higher end) needing color commentators.

There are two pivotal figures in the attempt to nail down the final two CBS/Turner announce crews: Kellogg and Doug Gottlieb.

One could view Gottlieb as a poor man’s Jay Bilas, in the lineage of Billy Packer and that style of color commentary. Bilas is the truest and foremost successor to Packer in terms of loving college basketball enough to complain about it all the time. It’s clear that Bilas loves the sport, but he shows that love by complaining, by being the stern father-evaluator on air.

Raftery, as an instructive contrast, is from the School of Joy in Broadcasting, informative but with honey and happiness in his voice. Both kinds of voices can make for great TV if done right. Packer was the master of this — he angered people, but he was can’t-miss television partly for that very reason (the other part being that he knew his stuff cold). Bilas follows in that line of color commentary, and Gottlieb — though a few notches below Bilas in terms of pure quality — is cut from that same cloth. He is authoritative and knowledgeable, and he’s not afraid to tell you as much. (As Packer liked to say on air, “Often wrong, but never in doubt.”)

CBS/Turner have a fundamental decision to make when choosing Marv Albert’s partner. Do they want to give Gottlieb — sharp-edged and laced with vinegar — the seat next to a broadcasting icon? Or, will Kellogg be seen as the safe and comfortable choice, something (and someone) which would alleviate a sense of worry in a year when having fewer controversies is especially desirable for CBS and Turner? Chris Webber or Steve Smith could also step into this spot.

Greg Anthony brought embarrassment upon Black Rock with his arrest in January, and the Andrew Catalon mess a year ago was hardly good publicity for CBS. An Albert-Gottlieb pairing possesses more potential… but that potential is for disaster as well as greatness, in relatively equal measure. Kellogg, as a safer choice, could be exactly what Turner wants for Albert, its showcase voice at the NCAA tournament.

Against the backdrop of all this, remember what was said above: Kellogg is a strong choice to be paired with Verne Lundquist, so in many ways, the central decision being mulled over in CBS and Turner offices is where Kellogg should go.

In the end, four crews — Nantz-Raftery-Hill, Eagle-Spanarkel, Anderson-Bonner, and Blackburn-Gminski — are either already set or make sense as crews that should be put in place. This leaves the composition of four crews in question, with the added note being that Harlan and Miller should remain together. Whether they will be joined by Elmore is the lingering point of uncertainty.

If you were to ask, “What’s the most likely outcome for the eight NCAA Tournament announcing crews?” here’s one person’s answer: