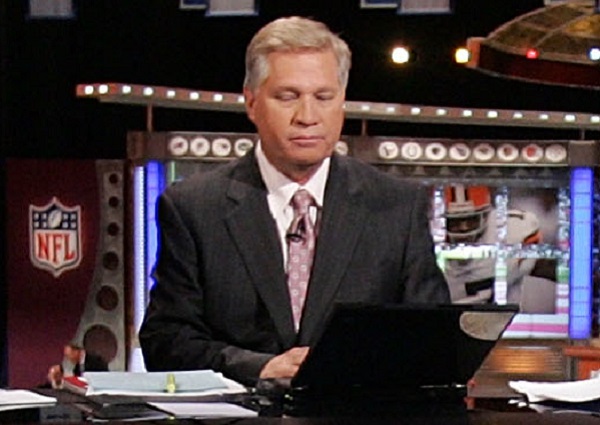 The Hollywood Reporter recently released their list of the Top 10 most powerful voices in sports media.  Among the Top 10 were the usual list of suspects you would expect to see – Simmons, Barkley, Costas, Beadle, Bilas, etc.

Alas, there’s someone very important missing from that list.  Someone who drives many of the biggest stories in the sports.  Someone completely unknown to the general public, but someone who carries a growing amount of power over the media and the sports world as a whole.

It was the league source that started the DeflateGate saga.  Veteran Indy reporter Bob Kravitz first broke the story about the deflated balls from the AFC Championship Game citing “a source within the NFL.”  It was Chris Mortensen’s tweet above, also citing anonymous league sources, that kicked the controversy up several notches and helped spin it into the sports scandal of the year.

But as we learned through the Wells Report and saw illustrated this week, Mortensen’s report turned out to be false.  Patriots owner Robert Kraft eviscerated the NFL and ESPN for never correcting the errant report after Tom Brady’s suspension was upheld.  And before Mortensen no-showed a scheduled interview on Boston’s WEEI to talk about the story, his ESPN colleague Adam Schefter went on the same station and implied that Mortensen was betrayed by those same league sources that now see the reporter taking the fall.  Via Pro Football Talk:

“And I don’t know the particulars of what happened. I really don’t, OK?. But I can tell you this, somebody wanted information out. You’re blaming him. But I will say this. Number one, I’m sure he has an explanation. Number two, any reporter in the country, if they have high level people calling them, giving them this information, almost anyone’s gonna run with it.”

“If that is indeed the case that one, two, three high-level individuals intentionally misled him to try to smear the Patriots, I say more shame on those people than Mort,” Schefter said.

There are many individuals hoping Chris Mortensen would eventually out his sources.  But if he did, he would never break another story from a league source ever again.  With that understanding, you can see why Mort has been so reticent to speak publicly about those deflated balls.  Mortensen finally addressed the controversy on ESPN Radio on Monday with Dan Le Batard (a much friendlier and more sympathetic outlet than WEEI) and didn’t just refuse to out the sources, he defended them.  Mortensen denied Schefter’s theory that he was “betrayed” or “used” by his league sources and tried to rationalize the entire situation by basically hinting that there was a lot of wrong information being floated around and the truth got lost in translation.

As e-mails have been released this week detailing communications between the Patriots and the league office, the power of these sources has been illuminated in a way that the general public has rarely seen before.  In the e-mails, the Patriots are furious with the NFL for failing to control leaks coming from within their walls with regards to bad DeflateGate info.  The exchange paints the picture that the NFL might as well be playing the role of Sgt. Schultz and screaming “I know nothing!”  It’s either that… or the league is quietly behind said leaks to advance their own agenda.

We’re basically left with three scenarios here, none of them good…

Whether they were wildly confused, woefully inept or just plain dishonest, the power of and influence of these sources allowed the false DeflateGate narrative to be set.  In the worst hypothetical above (#3), the league then gets to set the narrative (11 deflated balls by over 2 pounds, wow what a controversy!), they get to control the message, they get to have the story printed that they desire, and all without a trace to the league itself.  Whether the story is actually true or not.  Instead, it’s the reporters publicly tied to their league sources that have to take the risk of the truths they tweet.  Bob Kraft has a right to be indignant that the league has never taken responsibility for the inaccurate DeflateGate narrative becoming public record.

But just who are these league sources?  If this week has proven anything, it’s that the rise of the prevalence of these league sources should be met with a healthy dose of caution and skepticism.  For one thing, fans can never know where details from league sources come from.  It’s such a nebulous term that obfuscates the true origin of the information.  Are they people who work in the central league office?  Are they high ranking senior officials or people working in the mail room?  Are they team employees?  Are they generic terms slapped on anything by those bogus insider Twitter accounts in the hopes that it will stick?  Who knows.

This is the high risk game that the widespread use of anonymous sources force reporters to play.  Yes, having a network of sources that allow you to report exclusive details can lead you to have millions of followers and become a household name like Adam Schefter or Chris Mortensen.  But the danger is that reporters must stake their entire reputations on their sources.  If they lead you astray, you pay the price Mortensen has seen this week, where he’s put in the awkward position of trying to stand by a false report and league sources that somehow led him astray.

While these examples may be jarring because of the size of DeflateGate and the importance of the reporting therein, the league source has actually become a part of daily life in sports before our very eyes.

The rise of league sources can be attributed to the change in culture the last several years and the premium on any tidbit of news that can be shared.  In the age of Twitter, social media, and real-time reporting, everyone in sports media is competing to get any exclusives they can because we crave information like never before.  It’s why insiders like Schefter, King, Glazer, Mort, and others have more Twitter followers than most franchises they cover.  Local beat writers cite the widely anonymous league source for a number of scoops, stories, and transactions to try to get a piece of the pie as well.  The entire landscape has turned into a massive gold rush for any nugget of information that can possibly be published.

Why?  Because we’re not sitting around waiting for the morning paper to arrive to look at the Transactions wire anymore.  We’re getting that news right at our fingertips whenever we want it.  And more and more reporters are using more and more league sources to get those stories and the retweets and followers and big-time jobs that come with it.  However, as this past week has shown, it’s the accuracy of that information that is still of the utmost importance.

It’s not just huge stories like DeflateGate where league sources take prominence, it’s in the mundane transactional world of everyday life in sports.  A player gets optioned to Triple-A, a draft pick gets traded, someone shows up at an NFL practice – all of this gets reported through league sources.  The league source is everywhere you look, feeding information from the inside to reporters that relay it to the public.  The league source is an omnipresent force in sports media.  But do we know enough about the league source to really trust everything that comes from it?