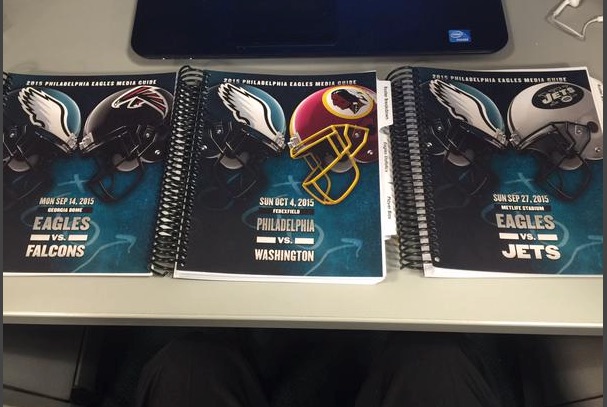 The media relations staff for the Philadelphia Eagles made a relatively strong statement this week by omitting the word “Redskins” from the team’s game notes in advance of Philadelphia’s visit to Washington for this weekend’s NFC East tilt.

Barring the weather postponing the game, Philadelphia will take on Washington for what could be a piece of the division lead, and the Eagles staff may have added a little more fuel to the rivalry by opting not to use Washington’s nickname.

This is interesting. The #Eagles appear to have wiped the name #Redskins from this week's weekly media guide. #NFL pic.twitter.com/VgA9ksVrbi

It’s incredibly noteworthy that the Eagles made a conscious effort not to use their opponent’s nickname. Only, they did use it. A lot.

The Eagles’ weekly media guide is a living document, with statistics, records and information constantly being updated throughout the season. As you can see in Matt Lombardo of 97.5 The Fanatic’s tweet, the team even prints specific covers for each week’s book, updating quite a bit of information throughout the document that, this week, totals 248 pages.

While, admittedly, much of the book isn’t updated every week—feature stories and most historical records pages remain untouched in publications like this—a lot of pages are, which is why crediting the Eagles with “wiping” the word Redskins from the publication isn’t entirely accurate. Lombardo, and those lauding the team for this decision, are giving the Eagles staff too much credit.

The Eagles’ game notes do not feature the words Redskins at all, while the word “Washington” as it relates to the opposing team appears 25 times.

In the Philadelphia player notes, the word Washington, again as it relates to the NFL team and not a player’s college or hometown, appears three times, while Redskins appears zero. In that statistics section, Washington appears twice, while no nickname is on that page.

In the rest of the book—pages 153-248 of this document from the Eagles’ website—the word Washington appears 20 times, while the word Redskins appears… 273 times.

That’s a lot of times for a team getting credit for using the word zero times.

Again, those records and history pages were originally created some time ago and are updated before each season, so if the decision to scrub the notes of the offensive term came this week, those pages would have been long since created.

That said, it took me about ten minutes to count all the times each word appeared in the book, and it would have taken me ten seconds to hit “Find/Replace” and change every one to Washington. With a live PDF, even if the printed version given to media has the nickname, the document online could easily be changed at any time.

Using the word Redskins in the Eagles media guide 278 times sure seems like a lot, especially considering the word Washington was used just 58 times. Credit the Eagles for breaking a lot of records in games against Washington I suppose.

What’s most interesting about those numbers, however is where some of those words appear.

Washington includes a “feature clips” section in their media packet with stories written by local and national scribes. Obviously the stories are all going to be favorable to the team, with several highlighting the coaching staff, front office and specific players. What’s interesting in this context, though, is that of the 25 articles culled from the likes of the Washington Post, Washington Times, FoxSports.com, ESPN.com and Sports Illustrated, the word Washington as it relates to the team appears 68 times.

There were, by my count, only a handful of articles that didn’t use the word Redskins, including a feature on Terrence Knighton by Don Banks of SI and several stories by Dan Steinberg of the Washington Post. Steinberg did use the nickname in other stories featured by the team.

Honestly, it’s difficult for media talking about the team not to use the word, especially in stories about the name controversy like this one. To this point, I’ve used the terms 10 times. I know that pointing that out doesn’t make using it any better.

In 2013, the Associated Press conducted a poll and found that only 11 percent of Americans polled felt the nickname should be changed, with 79 percent in favor of keeping the name.

In 2014, a poll released by Public Policy Polling, per USA Today, said that 71 percent do not think the team should change its name, while 18 percent think they should.

These numbers are a stark increase from decade-old polls which had the team name’s approval rating around 90 percent.

This has been and will continue to be a polarizing topic, and until Daniel Snyder decides on his own to change the name—something he said he will never do—or Roger Goodell and the other NFL owners force him to do it, the name is going to stay.

Still, I just can’t stop thinking about those numbers. Fewer people find the name acceptable than before, so at what point will Snyder realize he’s losing ground, and potential fans, by keeping the name? At what point will it be a smarter business decision to change it than not to?

If 18 percent of Americans think the team should change the name, that’s a clear minority, no matter how vocal they are. Big businesses rarely cater to the margins. And yet, there are currently 321,864,235 people living in this country, give or take a few babies born from the time this was written until the time you are reading.

Clearly someone working for the Eagles agrees, even if they didn’t do the greatest job wiping the name from their entire media guide. Still, it’s a start, and it has certainly stoked the conversation—and the rivalry—this week.